It rained on and off this morning, often much more on than off. As I didn’t have any particular need to go anywhere, I spent the morning pottering about the boat, enquiring about blacking which needs doing, and chatting to my friend Orna in Manchester, and Adrian who’s having a day in Nashville.  Around lunchtime I almost set off a couple of times, but each time it started raining again so I ended up having lunch first.  When I finally go going, at about 1.45, it had really brightened up a lot, and all the Canada geese were in the water having a right go at each other. 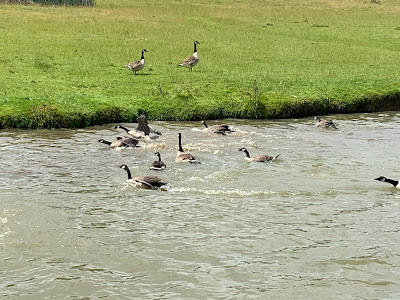 I went along to Stoke Bruerne to turn around below the locks.  There was a massive widebeam getting ready to leave the water point, so I was glad I managed to get round before he set off; I really wouldn’t have waited to be behind him. 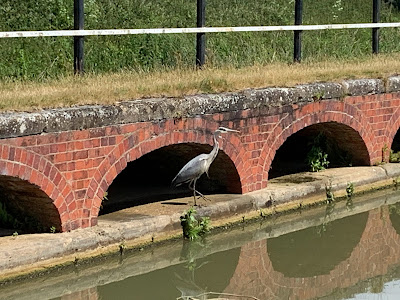 The afternoon got better and better weather wise.  I moored up just before Bridge 63, in a spot I have used before.  This morning’s rain had washed off quite a lot of the dust from the side of the boat, but I still got out a bucket and gave it a bit of a going over, and it did look better once it was done.  Then I thought I’d better go for a walk, as I hadn’t really done anything all day.  I knew there was a path on the opposite side of the canal, so I walked along to the bridge and turned onto it — only to be defeated by massive thick stinging nettles.  There were some very delicate seed heads on the towpath though. 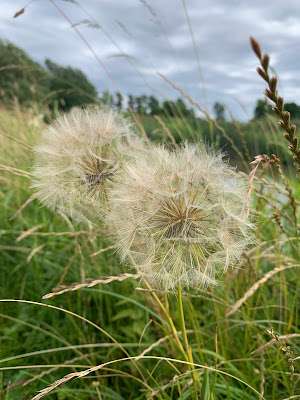 Instead, I walked down to Bridge 60, by Kingfisher Marina, and took a path which looped across fields.  One of them was full of very tall grass. 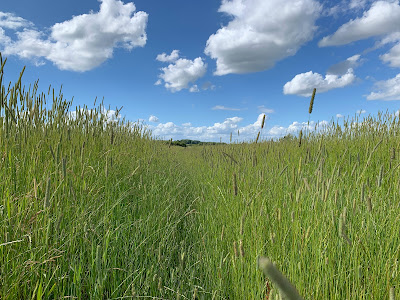 Another had what looked like thistles in it, and the route of the footpath wasn’t clear.  I walked around the edge instead, and eventually found Bridge 59, the one the other side of Kingfisher.  For a while, I’d been able to head a boat engine, and eventually cause up with Hood, a Samuel Barlow boat which had been at Braunston. 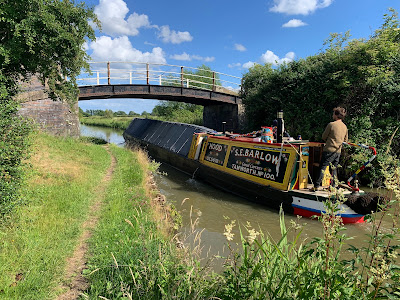 I said they’d done well to get so far, but they explained that they’d left the rally early yesterday.  I got to Briar Rose before they did, and as he went past the helmsman said he could have given me a lift!