I slept well — perhaps not surprising given that I’d been up well over 24 hours and had had a couple of glasses of wine.  This morning was very sunny, and the mooring had no protection at all.  As some of the festival boats had begun to leave, I moved along a bit to where there was some shade.  I wanted to get the roof washed, and that would have been difficult in full sun as it would have dried too quickly.  Even so, by the time I’d finished, the sun had moved and the back half of the roof was in the sun again.  The next job was to wash the towpath side of the boat.  I then waited a bit before starting to polish it, until the sun had moved a bit further giving that side some shade.  It was extremely hot work.

After lunch I noticed that Jules and Richard from Jules’ Fuels we’re heading my way.  It took them a while to arrive, as almost every boat stopped them for diesel.  I thought it was worth filling up, and 53 litres went in. 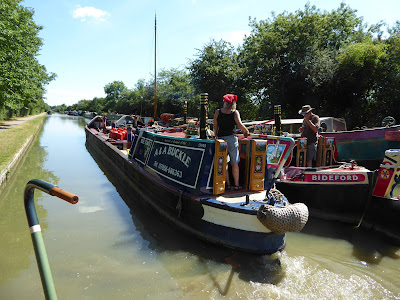 The observant will notice that the motor is Bletchley, rather than Towcester.  Richard was telling me that Towcester was having engine problems, and they’d been planning to borrow Bletchley while repairs were carried out.  But the boat came up for sale, so they bought it instead.  Having both will help during winter stoppages, because they can put a boat each side, and cover more of their patch.

In the late afternoon, Helen and Andy went by on Wand’ring Bark. Having spoken to the, earlier, I knew they were just going to turn round to go back to the water point below the lock. I walked along to the aqueduct, went down the path and through the horse tunnel, and waited for them to come back across. 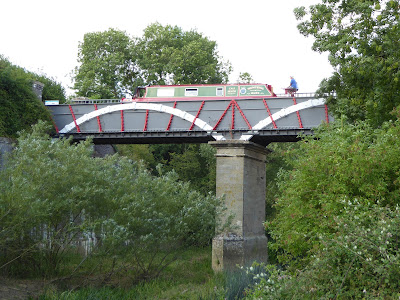 I’d had an early dinner, then at around 6pm set off for the marina.  It was only slightly cooler, but at least the sun wasn’t quite so strong.  The mile and the one lock took the best part of an hour.  There was a bit of a wait for the lock (which at least meant another brief chat with Andy and then Helen), and there are so many moored boats it’s rare to get above tickover.  Once back in the marina, I packed up, loaded up Adrian’s car, and drove home.

Yesterday, Adrian was on the boat at Cosgrove while I was still at work.  He looked round the festival and did some work, then entertained Helen and Andy from Wildside for dinner in the evening.  It seems they had a fine time sitting out on the towpath drinking partially frozen prosecco and eating Adrian’s speciality South African dish, boboti.

This morning, once my night shift was over, I came up one the train to Wolverton where Adrian was waiting to meet me.  We took the car back to the marina, then walked along to Cosgrove.  The Canal Festiaval has quite a few trading boats along the towpath below the lock.  Naturally we stoped by the Jam Butty for more chat with Helen and Andy, 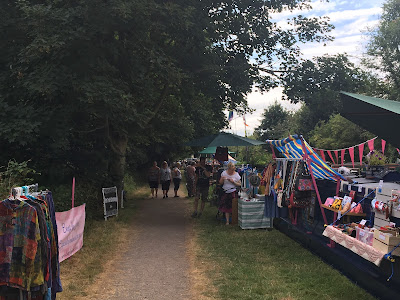 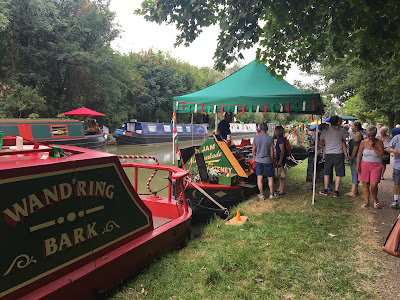 We went back to the boat for lunch, then I washed and polished the towpath side of the boat, which badly needed attention.  We set off about half past two, aiming for the station at Wolverton so Adrian could get the train back to London.  The lock was worked for us because of the Buckingham Canal Society’s lock ransom, although it did cost us a donation. 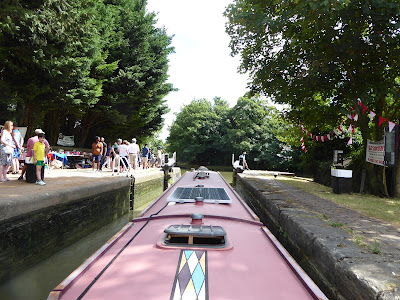 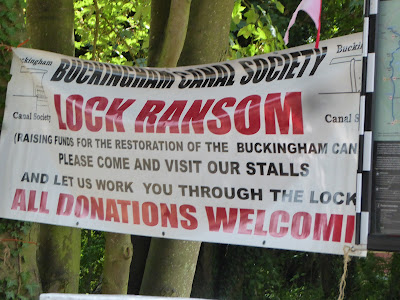 We continued to the winding hole at New Bradwell, and I dropped Adrian off in time for the train at just after 4pm.  I then carried on back to the Aqueduct and moored up, on pins, just at the end of the reserved moorings.  I then went down to Andy and Helen for conversation, wine, and (it turned out) an improvised meal consisting of th8ngs Helen had to hand, supplemented by a few things from our fridge.  It was a really great evening, even though by that time I’d been up for more than 24 hours; it reminded me of another occasion when we’d improvised a meal when we met by accident at Upton on the River Severn.

It’s the Cosgrove Canal Festival this weekend and we’ve never been, so Adrian went up to the boat yesterday evening.  I’m working a set of night shifts.  Today, Adrian did work and also decided to move the boat out of the marina.  The moorings below Cosgrove Lock are reserved for the festival, so he wasn’t rally that confident of finding any space in the village — but there were several to choose from.  He’s also been catching up with Andy and Helen from Wildside who are trading this weekend. This evening, they were going to get together on the towpath for dinner, but it’s chucking it down. 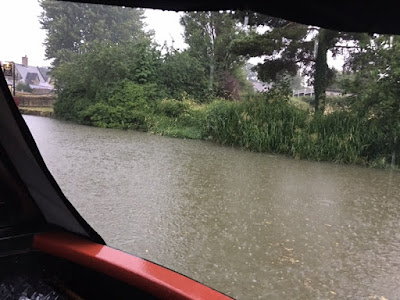 Two in a day

I came up to the boat after work yesterday, and it was sweltering. I slept with the rear slide open as well as the Houdini.

Today I met up with Andy at Bicester, and we travelled together to Stockton for a boat test. It was sunny and much warmer than forecast. When that was done we continued to Tamworth for the second boat test of the day. Unfortunately, I didn’t take a single photo all day.
Posted by Adam at 21:00 No comments: 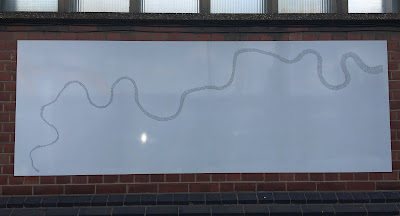 Adrian has a new job in London, so we’ll be spending a bit more time there.  At the weekend, we went to investigate Trinity Buoy Wharf where there’s a pier, a lightship that’s now a recording studio, and workshops made from shipping containers.  But I was particularlybtaken by this map of the Thames on the wall of one of the old warehouses.  The artist spent the summer of 2016 on the Thames, and has used the names of all the boats to mak the shape of the river. 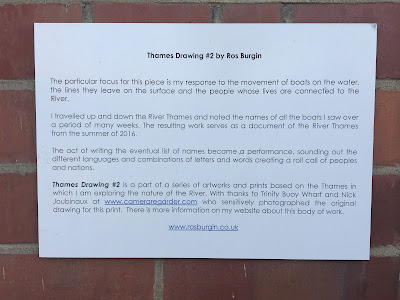 Elizabeth Anne on test, and 21 other Crick boats 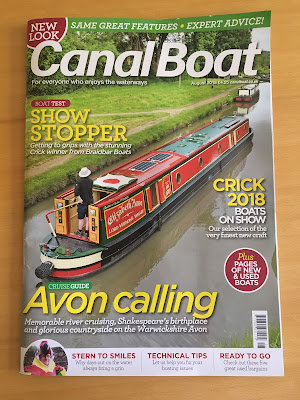 The August edition of Canal Boat is out and includes my boat test on the Crick winner, the Braidbar boat, Elizabeth Anne. 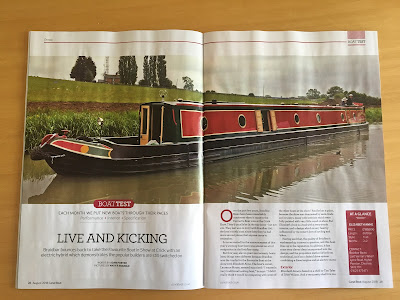 There’s also ten pages of mini reviews of other boats on show at Crick. 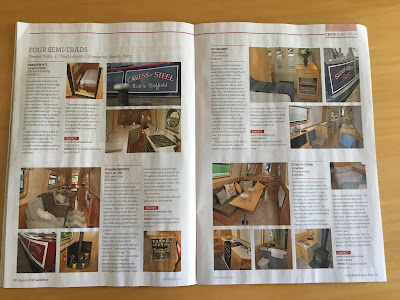