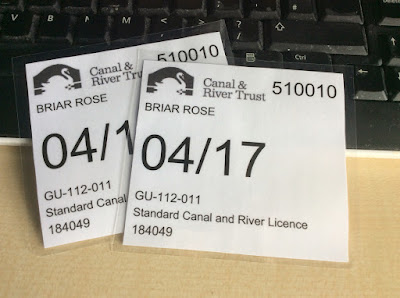 I've just used the new online CRT licensing system -- and it seems very efficient. I updated the details that needed updating, like BSS certificate number and insurance expiry date, and then paid. The licences themselves can be downloaded and printed, and as usual I've laminated them.

It's the end of our fifth year of ownership of Briar Rose. This year we have spend 59 nights on board -- which is the lowest annual total so far. We have traveled 504 miles (also nowhere near the highest), but passed through 532 locks -- which is just two short of our annual record.

Waterways covered this year were:

My mother has had heart problems for a long while, so she only came up to Briar Rose once, in May 2012 (although my parents had also come with me on Debdale for a few days in 2007). Strangely enough, her pacemaker reported later that she'd almost had another heart attack that day -- it must have been the excitement of 3mph. 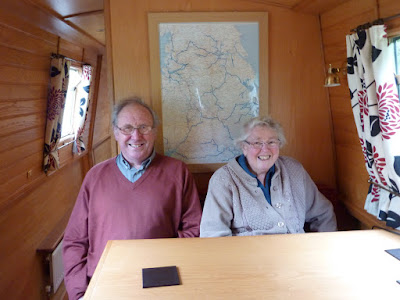 Mother died yesterday evening; my father and I were with her, and during the day she'd also seen my sister and her family. She was ready to go.

This is a boating blog, so let's talk boating. My parents had quite a few holidays afloat when they were young, along with my uncle and his wife. They remember Blosworth Tunnel before it was re-opened, and there's even a story about the weir where the Trent crosses the Trent and Mersey at Alrewas! In recent years she'd had a tablet, and would follow this blog when we were on our big trips. We're going to miss her.

A day of two halves

It's great waking up on the boat when it's out on its own somewhere, not in the marina -- even if the marina is only a mile away. This morning it was pretty murky first thing, but very calm. The hedges round here are absolutely alive with birds. Just while I was having breakfast I saw robins, blue tits, and a couple of tiny wrens, which were singing their hearts out. On my brief trip I added greenfinches, chaffinches, and pied wagtails. 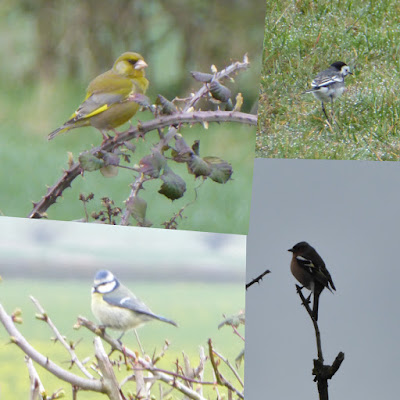 I went down to Baxter's, which is now under new ownership, John and Lynn having retired, to get a couple of bags of coal. Then I turned in the marina entrance and headed back to our marina. All the turns, at Baxter's, to get into Thrupp Wharf, and to reverse into our berth all went like a dream today; I've no idea why, and I also know that it might go really wrong next time.

Once Briar Rose was tied up, I filled the water tank -- having noticed that the bow looked a bit high out of the water. It took ages, possibly because it might have been before Christmas that we last filled up. While that was going on I took everything off the well deck and gave the whole area a good scrub.

At lunchtime I changed, then headed out in the car to Cambridgeshire, to go to the funeral of my aunt. It's ages since I've seen my uncle and my three cousins, so there was a lot of catching up to do. It was very much a celebration of Auntie Helen's life rather than a mournful occasion -- a number of people said it had more of the atmosphere of a wedding than a funeral.

The drive back was very quick, partly because I'd stayed so long that the Friday night rush was over. Tomorrow I need to up reasonably early, as I have to go to work.

For the second time this week, I've come up to the boat after work. Today though it was following an early shift, so the drive was somewhat busier, and I arrived much earlier, at 4.30. While on the M1, I'd come through a hail shower, but when I got to the marina it was bright and dry, if a little breezy. I decided that with the extra daylight and reasonable conditions I'd get out of the marina for the night. 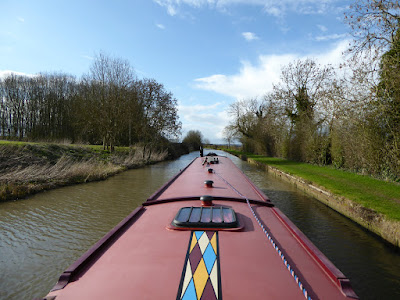 There are signs of Spring everywhere, with hedges beginning to sprout leaves, trees almost ready to show too, and even fields of rape beginning to look yellow. 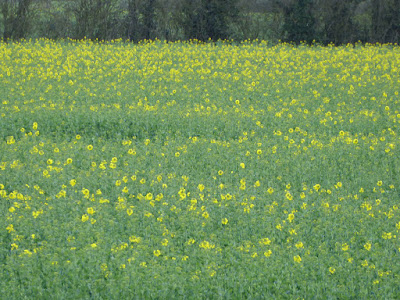 I haven't come far, just down to a spot I like between Bridge 62 and Bridge 61. There's no-one else anywhere nearby. There's been one sharp shower, but it's now sunny again. Tomorrow, I have a funeral to go to in the afternoon in Cambridgeshire, so I'll head back to the marina via Baxter's as we're down to our last few bits of coal, and it can still be pretty chilly.

Some very familiar water travelled today, but on an unfamiliar boat. I came up to Briar Rose last night after work, arriving a little before 11.30pm. The boat was chilly but not too cold; it was a case of gas on, water on, kettle on, fire on.

This morning I drove to Wolverton and parked the car, then walked to New Bradwell for a boat test. The boat was moored near the New Inn. 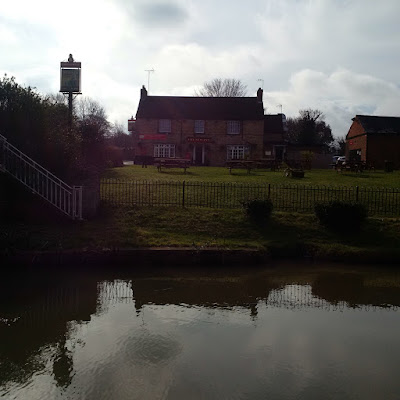 The weather was much better than forecast, and we did the running shots on the short trip down to Wolverton. We waited a while in a couple of places for the sun to come back out.

We were all done by lunchtime, and I drove Andy the photographer and all his kit back to his car at New Bradwell, before heading home through some very heavy rain. 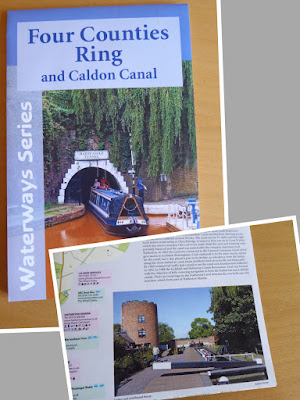 Heron Maps have a new edition of their Four Counties map out -- and it includes one of my photos. It's one of Gailey lock and the Roundhouse, and Adrian has a starring role.