As predicted, I was in bed early last night — in fact I was falling asleep at 7.30!  This morning was bright and sunny again.  We had porridge for breakfast as set of at about 9.15.  As I was about to push the boat away from the side, a boat came round the corner, so I waited.  This proved to be a mistake, as — at the steerer’s own admission — the boat with its little Butty went very slowly.  He let us pass at the bridge beyond Baxter’s.  There were lots of clumps of branches in the water, presumably from last weekend’s storm, and relatively few boats moored up. 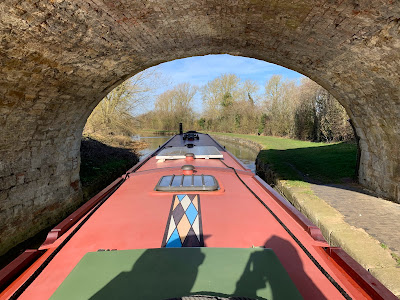 When we got to Stoke Bruerne, there was only one boat on the moorings at the bottom.  We turned in the entrance to the arm there and moored up.  We walked up the locks to the village and along to the tunnel; again there were very few boats around, with just two or three moored in the long pound, and a few at the top.  The hedge by the towpath in the village has been expertly layered. 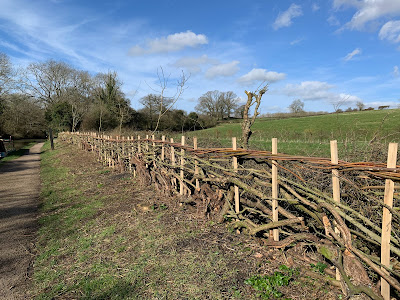 We knocked on Kathryn’s door and had a chat with her, then went over to The Boat for lunch.  It’s a bit of a funny pub, with lots of small, odd shaped rooms.  We had a decent sausage baguette at a table with a view of the canal, under a rather nice painting of the Grand Union in winter. 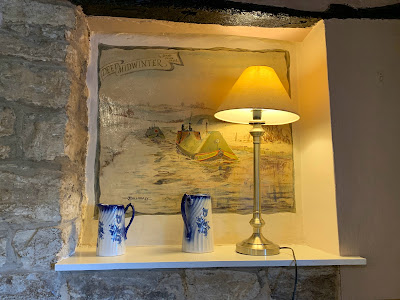 We walked back down to the boat and set off.  It took the usual hour and a half or so to get back to the marina, but it has been much more blustery this afternoon which didn’t help with getting into the marina or into our berth.  We’re back tonight because we are driving up to Mercia Marina tomorrow morning for a boat test.

We had some logistics to get through to get to the boat this morning.  Adrian was up early and drove to Bicester North Station, where he got on a train to London for an appointment.  I finished a night shift, got a train to Bicester North, picked up the car and drove to the marina.  Everything was well with the boat, and I reversed the minimal winterisation we do, topped up the water tank, and prepared to set off.  I was under way at about 9.45, on a sunny day with a chilly breeze.  Before long I was going through Cosgrove Bridge.

I was lucky at the lock.  I’d just passed a widebeam going north who said the lock would be in my favour. As I arrived, a couple of volunteers were going to the Buckingham Canal Society work boat moored on the other side, and opened a gate for me.  And there was a hire boat just arrived to come up, so they worked me down.

I boated through Wolverton to the winding hole just beyond the Grafton Street Aqueduct where I turned around.  For some reason, turning here is always quick and easy.  I retraced my steps, past the Wolverton mural, and tied up by the flats.  There’s a lot of work going on under scaffolding on one of the blocks; it appears the insulation is being replaced. 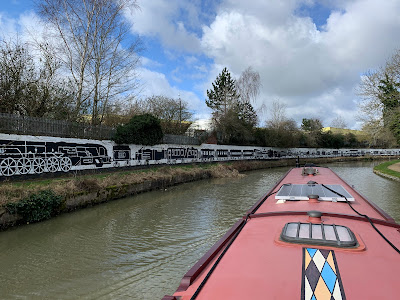 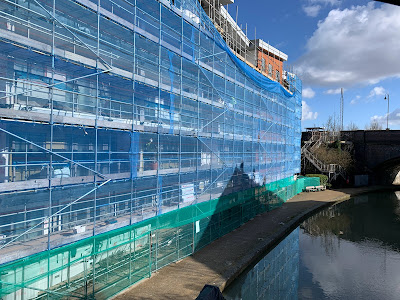 It had taken a couple of hours to get there.  I did a bit of cleaning of the boat, and had a shower, then Adrian arrived back from London on a train to Wolverton.  We walked up to Tesco, had lunch at the Costa there, and did shopping for the next couple of days.  We set off again at 1.30, plodding past all the moored boats.  Cosgrove Lock needed turning, and Adrian went to work it. 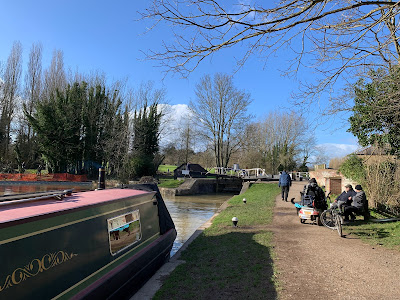 The sunshine made the countryside look beautiful, and there was even a bit of warmth in it. 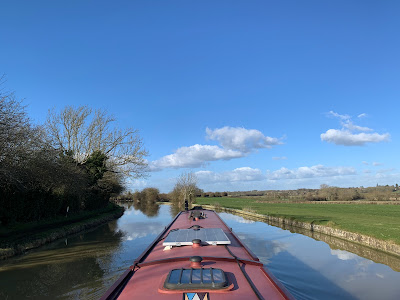 We carried on past our marina to Bridge 62 and moored up in a nice sunny spot.  It was just past 3pm.  Having been up since yesterday evening, I don’t think I’ll be up late.

And an update on the Aylesbury murder trial, from the previous post, in which we both gave evidence.  It turned out that the perpetrator had been convicted of a double murder in Poland in the 1990s, had absconded from jail in the 2000s, and had been the subject of an Interpol red notice ever since.  He was sentenced to life with a minimum term of 35 years.  The Mirror and Mail websites both have full write-ups, if you want all the details.

Back in April last year, we spent rather longer than we might have liked in Aylesbury Basin, having come past the scene of a crime on the towpath.

Today, Daniel Wisniewski was convicted at Reading Crown Court of murdering the CRT employee, Clive Porter.  It was a unanimous verdict by the jury, and he'll be sentenced tomorrow.

Last month, Adrian and I gave evidence at the trial, along with a number of other boaters and other witnesses who'd been on the towpath at the time.  It was a fairly stressful experience, but at least we now know that justice has been done. 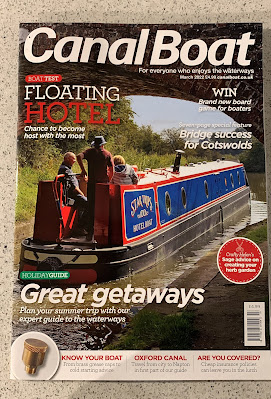 The March Canal Boat is out, and includes my boat test on Star Trips by Aintree Boats.  It was built as a hotel boat, but the owners have changed their minds and it’s currently on sale at ABNB — so if you fancy running a hotel boat…