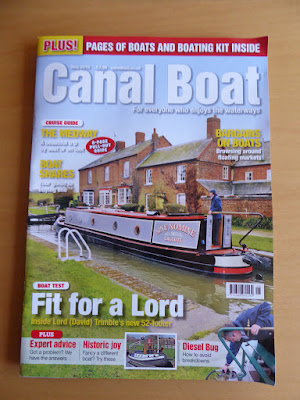 It might still be March, but the May issue of Canal Boat is out, and includes my boat test on Sine Nomine, a Wharf House fitout of a Steve Hudson shell, which was unfinished when Steve died. The boat is owned by Lord Trimble, the former First Minister of Northern Ireland. 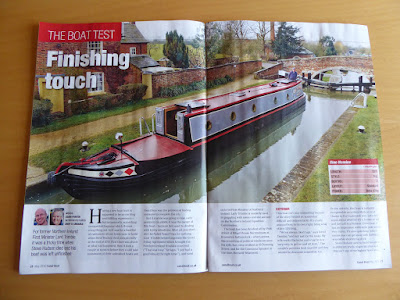 There's also a piece on shared ownership, which includes a contribution by my second cousin, Catherine, about her shared boat, Rowington. 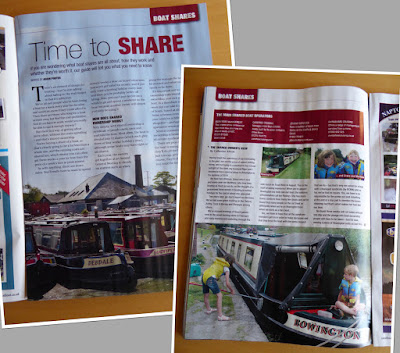 It felt much colder when we set off this morning at a little after 8.30. We had to turn Stoke Hammond lock before we went, and it was the same at Fenny Stratford (although that lock is much shallower). Then it was the long plod through Milton Keynes -- during which time the sun made an unforecast appearance. 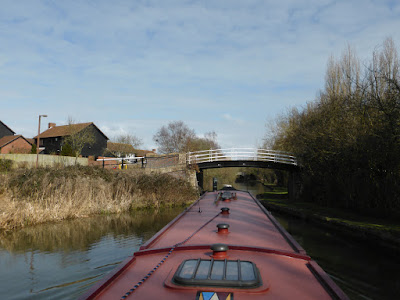 The Gulliver's Land amusement park was open with the rides going, and there was some sort of horse event going on through the parks, as there were plenty of riders wearing numbered brightly coloured tabards. As we went along, Adrian made a leftovers lasagne -- using chicken from our Friday night roast, and some of the sauce from last night's pork. We moored up at Bridge 75 for lunch.

We set off again about 1.30; the usual scenery came and went. At Cosgrove lock, Adrian went to work it. A boat had just gone up, and one was coming down; while I waited I chatted to Mick who made our fenders a couple of years ago. We got back to the marina at around 3.30. We seem to have the exit process down to a fine art, as we were in the car and heading home about 20 minutes later.

We set off this morning at around 9am. Adrian walked up to get Fenny Stratford lock ready while I brought the boat. Here he is swinging the bridge back into place after we'd risen the foot or so. 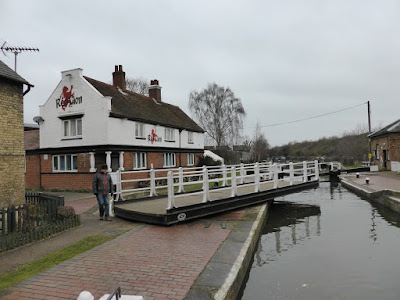 Stoke Hammond lock is one of our favourites; Adrian is particularly keen on the converted engine house there. Today, a Wyvern hire boat was just leaving as we arrived, but they closed the gate anyway. While we were there, the sun made a brief appearance. 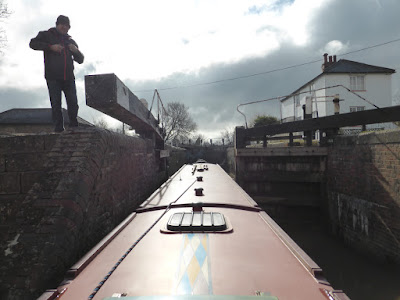 We continued up the Three Locks at Soulbury, where we had to turn all the locks as a boat was ahead of us, nearing the top. All the pounds were short of water. At the top we went along the Jackdaw Pound to Old Linslade where we turned around, and then returned to just before Bridge 109 (a favourite spot), where we moored for lunch.

We set off again about 1.30, and were soon at the top of the three locks. As I'd worked them on the way up, Adrian went to work them on the way down. There was a boat coming up on the middle lock, and he was waiting for a boat which was coming up the bottom lock. They both turned out to be on their way to London, to join the merry throngs trying to find somewhere to moor in the centre of the city. It all took quite a long time, and another boat arrived at the top to go down. This turned out to be a Black Prince hire boat, being moved from Willow Tree in London to Napton. Black Prince and no longer using Willow Tree as a hire base, and it seems the two may have fallen out somewhat. The guys on board said the boat was chained up when they went to collect it on Thursday, and it took a couple of hours of negotiation to get it released. They're due at Napton on Monday, so we're on quite a schedule. 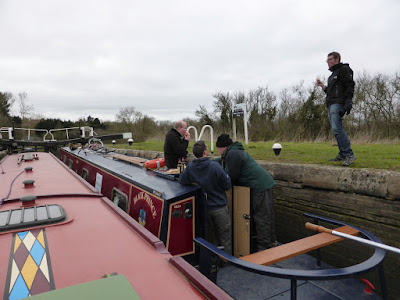 We stopped in the pound below the locks in another favourite spot. One summer evening we watched lapwings in the field opposite. The pound is already a bit low, and if it's true to form will probably drop a bit more overnight. By tomorrow morning we might be sitting on the bottom.

Adrian started making our dinner hours ago -- a pulled pork recipe that's a Vicky Blick special from Canal Boat from about a year ago. It's gently simmering on the stove, and smelling lovely. 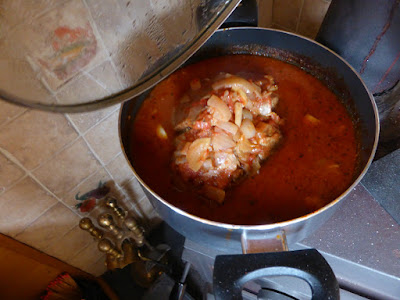 We came up to the boat separately yesterday -- and both had less than satisfactory journeys. Adrian set off at nearly 3pm from Liss, where he'd been to a meeting; he eventually arrived at the boat at 8pm having suffered from traffic and road closures. I got a train after work, and everything was delayed because someone had been hit by a train at Cheddington earlier in the day; I got to Wolverton at quarter to midnight, with Adrian waiting to collect me.

Adrian had got the fire going when he arrived, and it stayed in well overnight. This morning we got ready to cruise, and slipped out of the marina just before 9am, heading south. At Cosgrove there was an interesting looking boat, apparently made from a shipping container with a hull welded on. The bow is a straight triangle, with no finesse whatsoever. 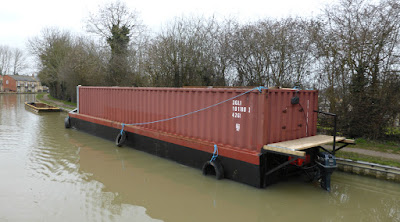 Cosgrove lock was the only one of the day. After yesterday's sunshine today was dull, cloudy, with a bit of drizzle in the air. But at least it wasn't windy. Through Milton Keynes there were signs of Spring, with some trees already having some blossom. 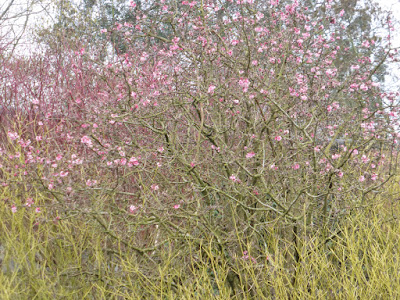 They're doing work to Bridge 67, and the workmen were grappling with what looked like a big pile driving machine. I'm not sure what they're doing, but the bridge does look a bit cracked in the middle. It possible needs work to stop it shifting further. 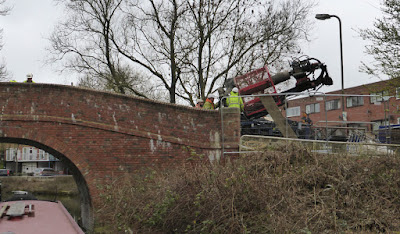 After Milton Keynes marina there's a new block of apartments, which looks quite attractive. This is where an office building had burned down, and then the new building seemed to stall. For a long time it was just a shell, but now it's finished with people living in it. 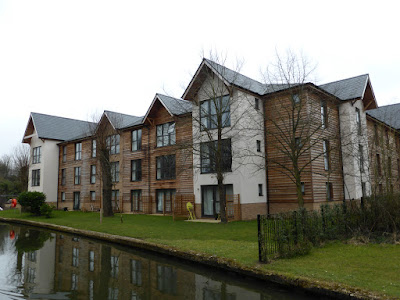 We had lunch on the move, then moored up at about 1.15 at Fenny Stratford. In the afternoon, we walked to the shops, mainly because Adrian wanted to get some new walking shoes. We also went to Ikea and got onions from Tesco, as he'd forgotten to get them yesterday. As we walked past the lock a single-handler was coming down, so we closed the gates and the swing bridge for him; as we arrived back, the widebeam hire boat from Milton Keynes was about to come through, so I waited and did a gate for them too. 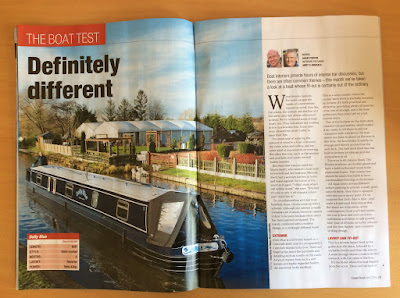 The April Canal Boat is in the shops, and includes my boat test on Dolly Blue, built by Aqua Narrowboats.

To Braunston this morning for a boat test. The forecast was wrong. It was raining when we arrived, but brightened up later, which was the opposite of what was supposed to happen. We used the bottom lock as our photo background; the little shop there is always photogenic. 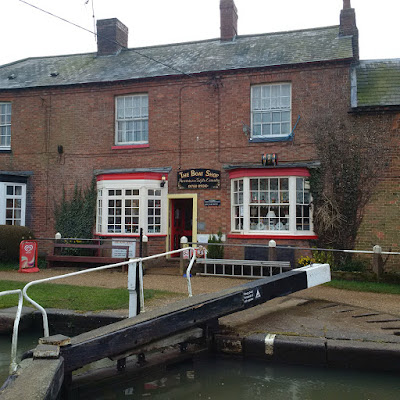 Back at the boat, I got quite a bit of the write up done, then went to sleep for a few hours. I'm about to head to work, as night shifts beckon.

I came up to the boat this morning, arriving at lunchtime after a rather slow journey. There were a couple of reasons for the visit: I have a boat test tomorrow (when I fear the weather won't be as good as it has been today); and I had a visit planned from Dave from Boating Leisure Services, to sort out our starting problem. 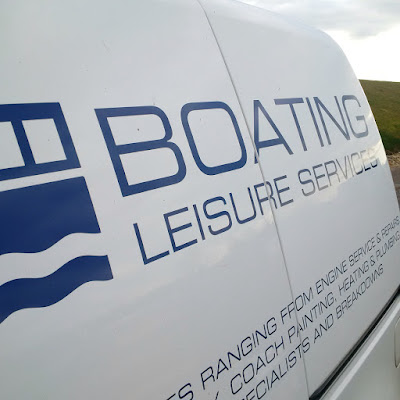 Dave tried various things to get the engine going -- with the possibilities narrowed down by knowing that we were able to start it by borrowing some power from the domestic battery bank. Within a few minutes he'd identified a battery terminal which was corroded on the inside. It was taken out and replaced with a new one -- and the problem was fixed. 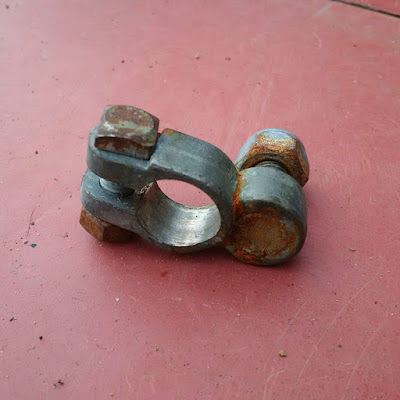 While he was here, Dave was approached by one of the other moorers with a question about something or other -- and it sounds as though he'll be back tomorrow to sort their problem out!

During the day, I've done quite a lot of cleaning through the boat. We haven't been on board since Christmas (an even then only for a couple of days) so everything was looking a bit unloved. I've also topped up supplies of coal and logs, and filled the water tank.