It's the end of our fourth year of owning Briar Rose.  This year we've covered 588 miles and passed through 402 locks.  We've spent 76 nights on board.  All of these are a little lower than the previous year, probably because our big September trip was three weeks rather than four, and also because we now don't seem to go so far each day.

Waterways travelled on were:
Changes to the boat include the fitting of a Smart Gauge battery monitor, which we now wouldn't be without, and replacing the pump out loo with a composting one.

One of the things we had done while Briar Rose was at Heyford Fields being blacked was a repair to the weed hatch.  I really like the Tyler Wilson design of weed hatch, which is completely separate from the engine hole, so you can't sink your boat by forgetting to tighten it properly.  Rather than a lid clamped on, there's a plate which sits over the prop, held in place by a bar and screw mechanism.

The problem was that over the years, the hole in the box section on top of the plate had worn larger and larger -- to such an extent that the screw could fit through it.  This meant the plate would usually fall off when I tried to lift the mechanism, and I was terrified of it hitting the prop, or of losing it through the hatch.  Putting it back on was also tricky.

So Heyford Fields have welded on a couple of semi-circles of metal to restore the hole to its original size.  They've also gone to the trouble of painting the whole thing. 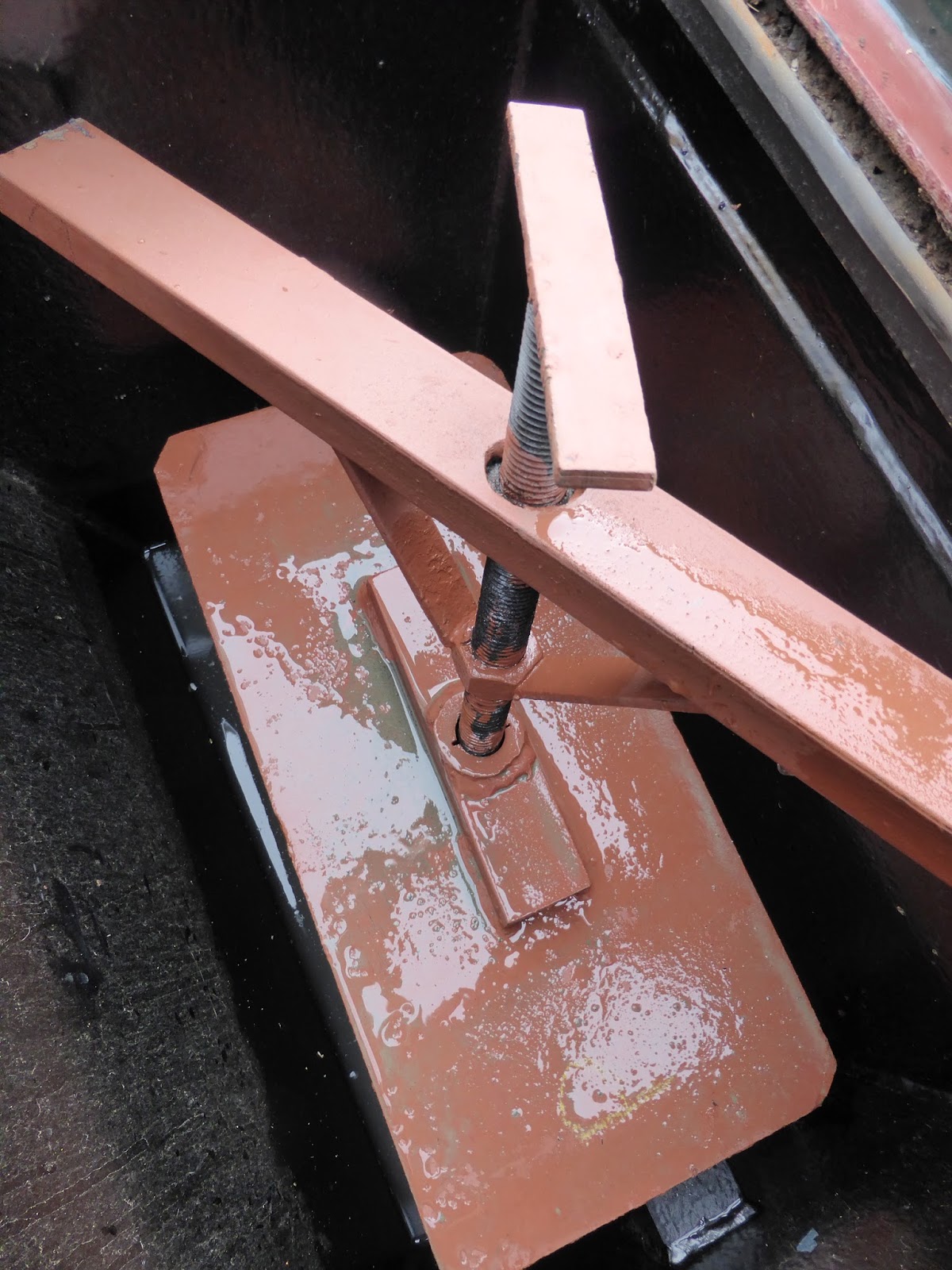 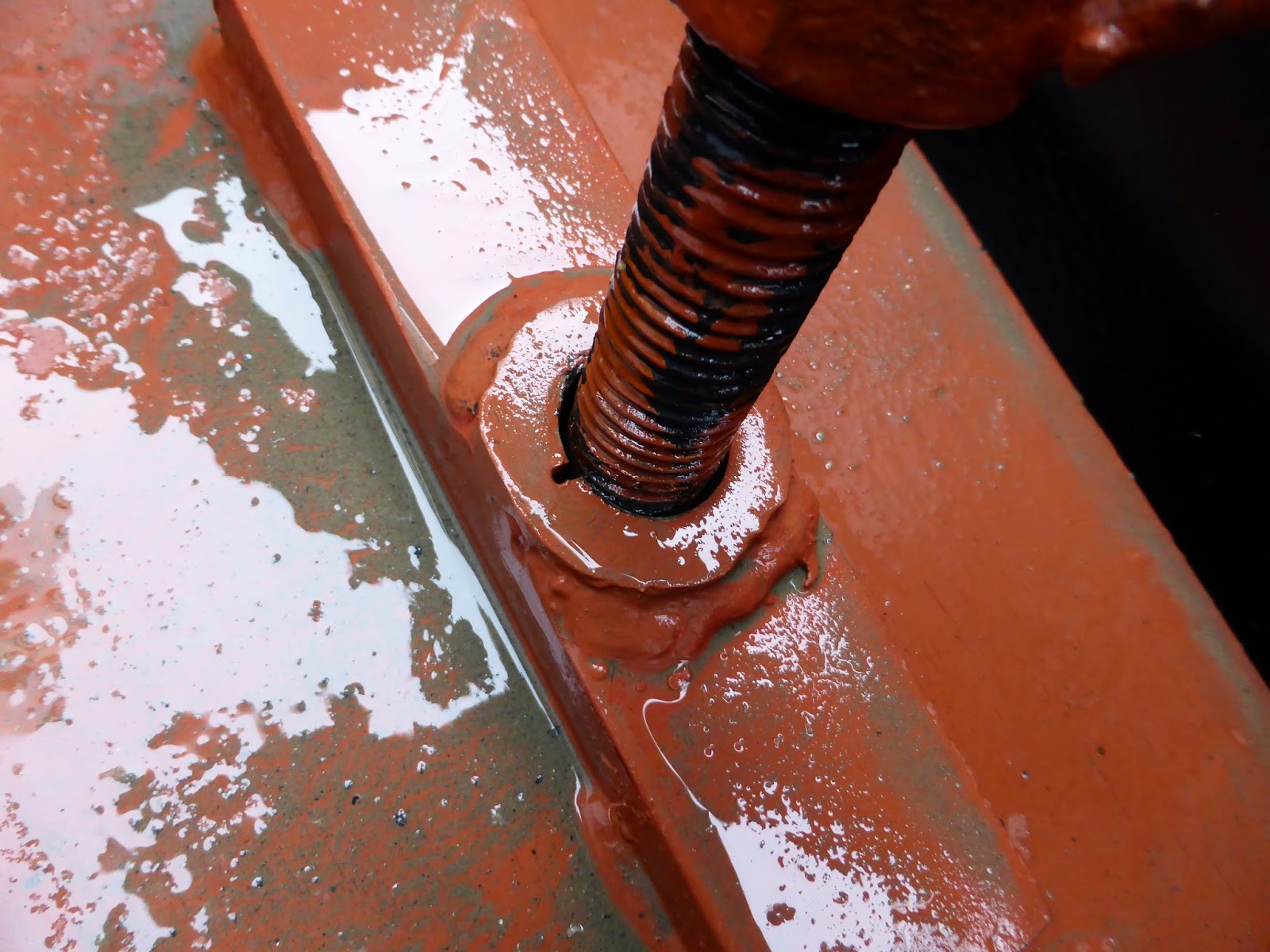 We've been pretty impressed with Boating Leisure Services at Heyford Fields.  They did everything we asked them to do, and nothing was too much trouble.  It's not surprising they always seem to be busy.
Posted by Adam at 06:27 1 comment:

Not so sunny today -- in fact, it was pretty chilly when we set off at around 8.15.  Everything looks very spring-like, even so, with the hedges and trees bursting into life.  As we headed back towards the marina, a swan took off up ahead, and flew right over the boat. 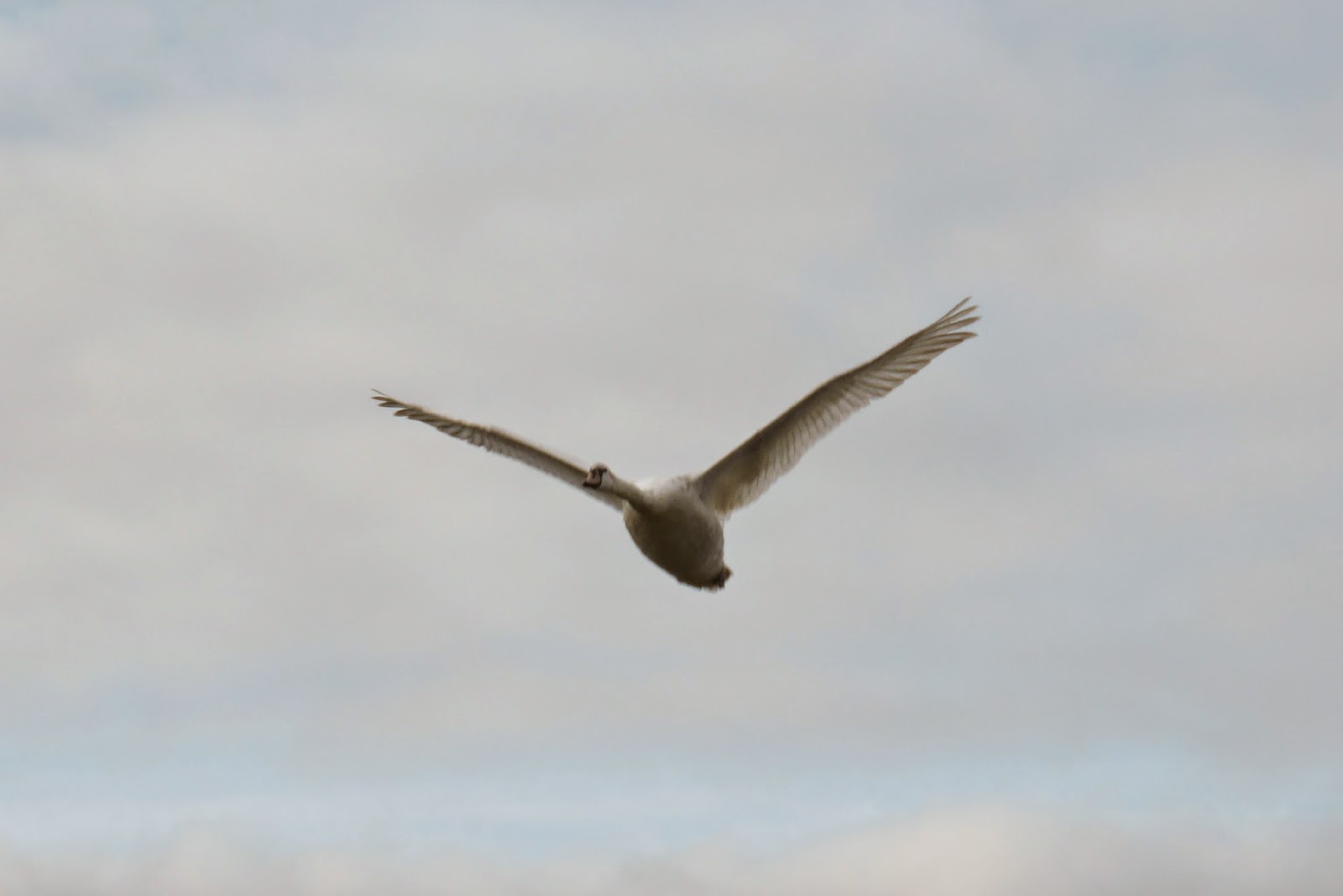 In around an hour, we were making the turn into the marina, and then spinning and reversing into our berth.  Fortunately there was no breeze, so it went very smoothly.  Our neighbour in the same space is out (we saw them yesterday), and we have a new neighbour sharing our jetty -- a very long tug called Herbert.

We packed up the boat, topped up the electric metre, and were heading out of the marina gate before 10am.  The drive home was quick too.  The reason for leaving so promptly is that I start my night shifts tonight, and want to have a nap this afternoon.

We slept well but were still awake quite early.  After breakfast, Adrian did some work and I continued writing up yesterday's boat test.  At one point I saw a bird with a long beak walk past on the towpath.  Having taken advice and looked at the bird book, I think it was probably a snipe.  It was gone by the time I got the camera out.

We set off in bright sunshine but a chilly breeze at around 8.30.  At Gayton Junction, a Alvechurch hire boat was turning into the Northampton Arm, a Canal Boat Club boat was coming the other way to do the same, and a private boat was just coming off the water point, so it was all rather busy. 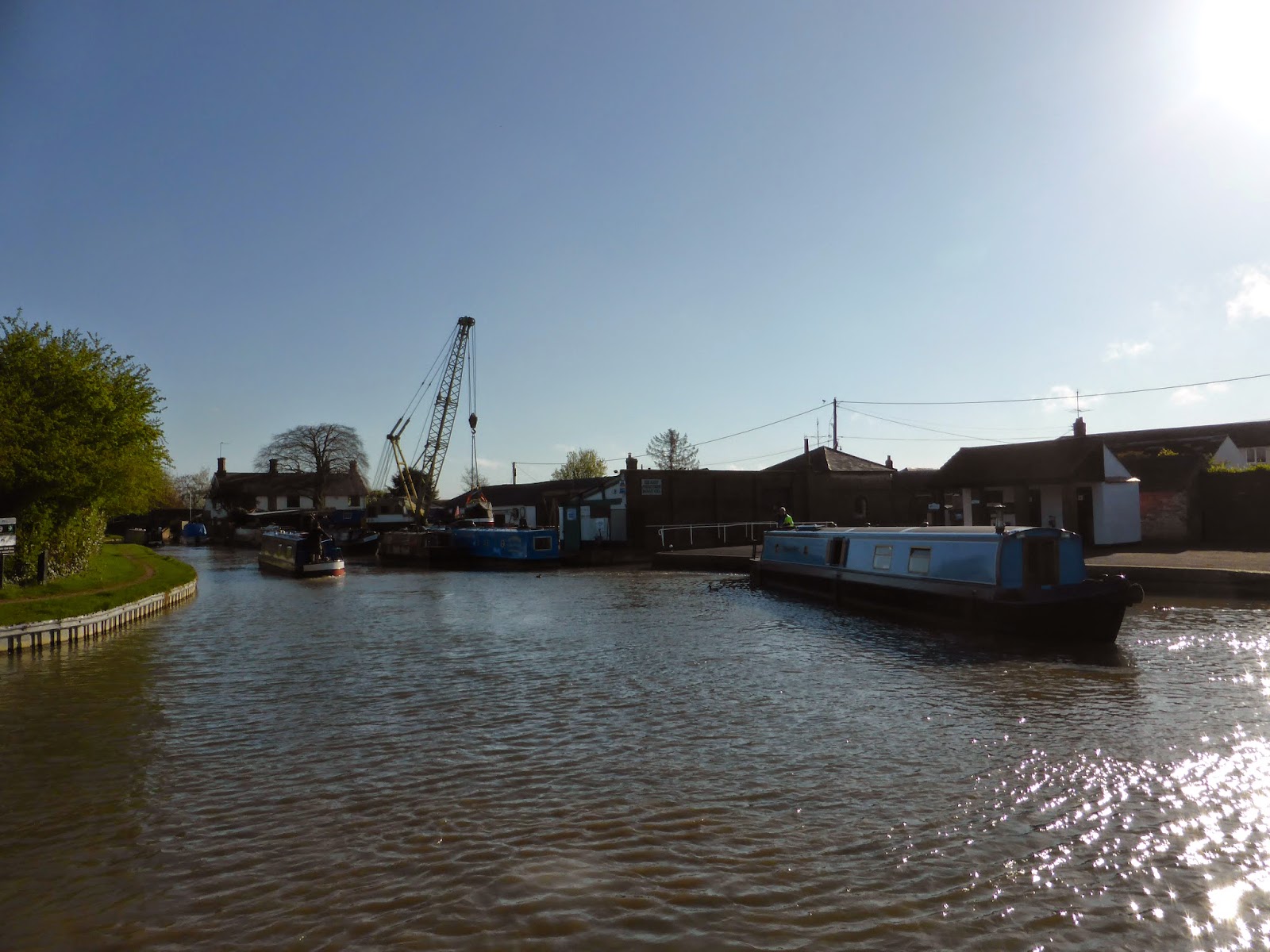 We tied up as Blisworth, both to make a quick visit to the little shop for bread, and because we'd arranged a family visit.  Catherine, Nigel, Grace, and Matthew arrived at 10 for a trip through the tunnel (except for Nigel who took the car over the top and down to the bottom of the locks).  Just before the tunnel there's a rope swing in the trees, and today two lads and their dad were making use of it. 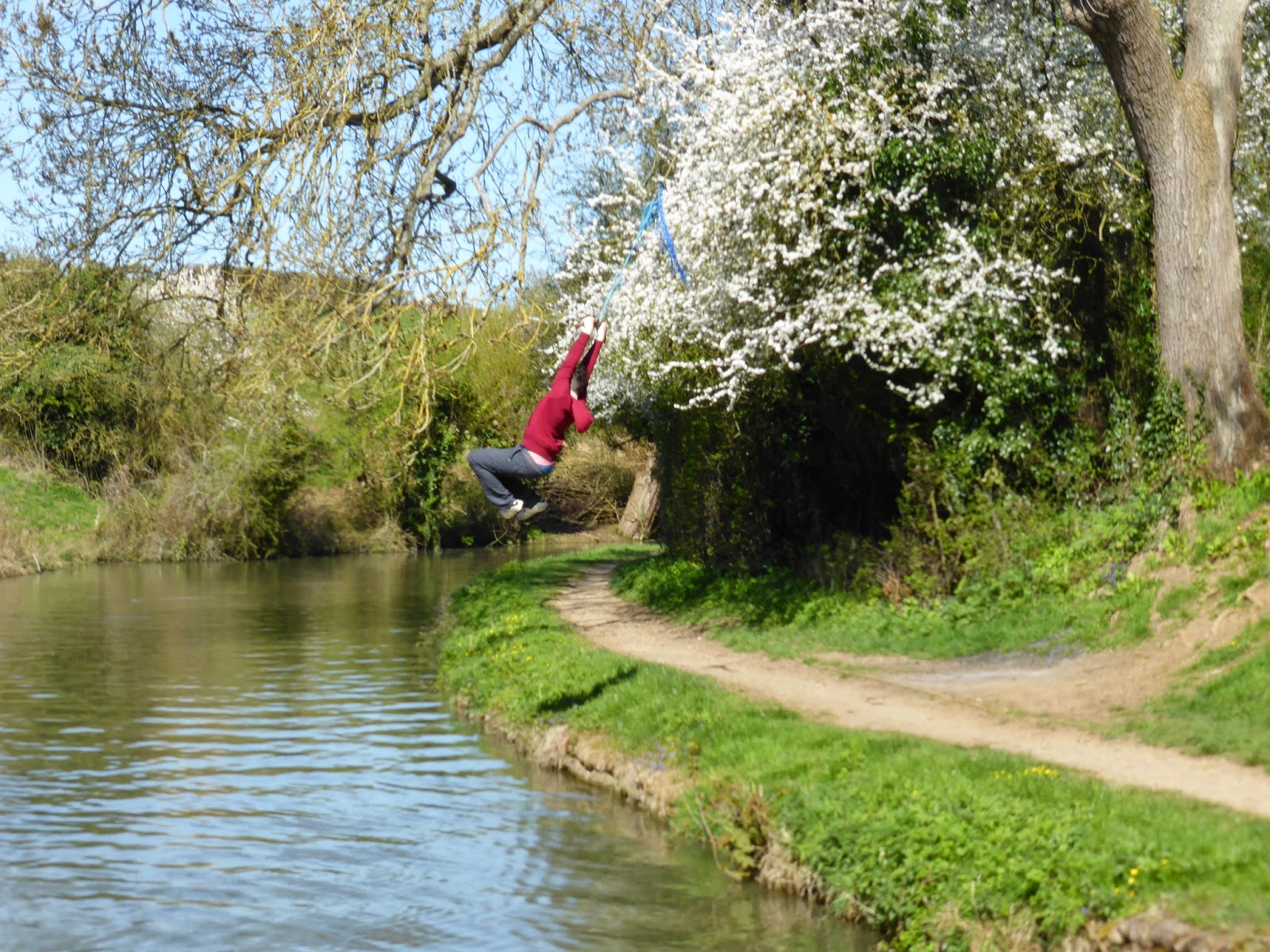 The tunnel passage took under half an hour, and there was plenty of singing and whistling as we went through.  We did the whole thing on our own, with no other boats in either direction.  By the time we emerged, Nigel had arrived at the south portal to get on board.

At the top lock a volunteer lock keeper set the lock for us.  At the third lock a couple of boats had come up, and we paired up with another boat on its way down.  Grace and Matthew did their fair share of pushing gates. 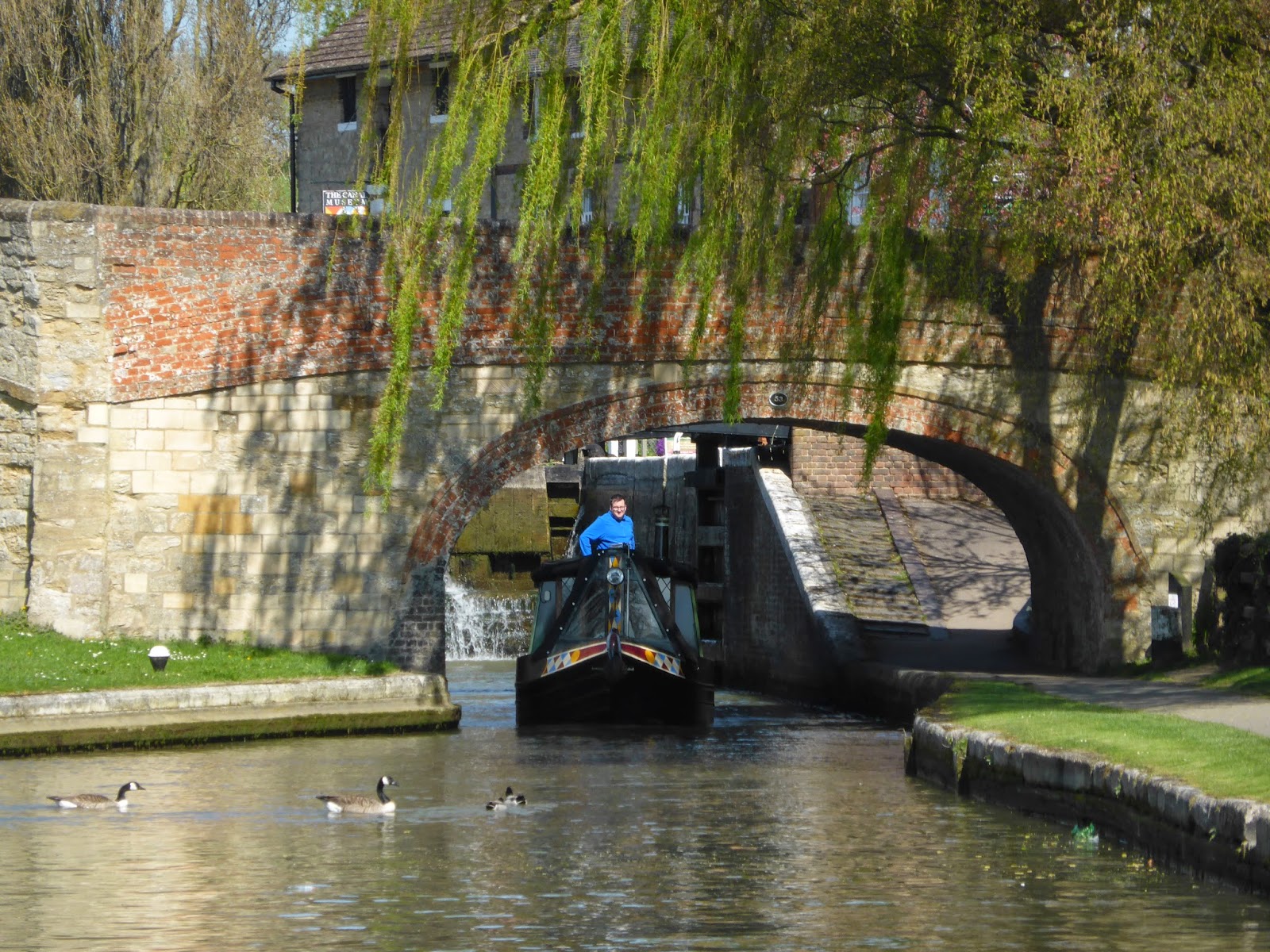 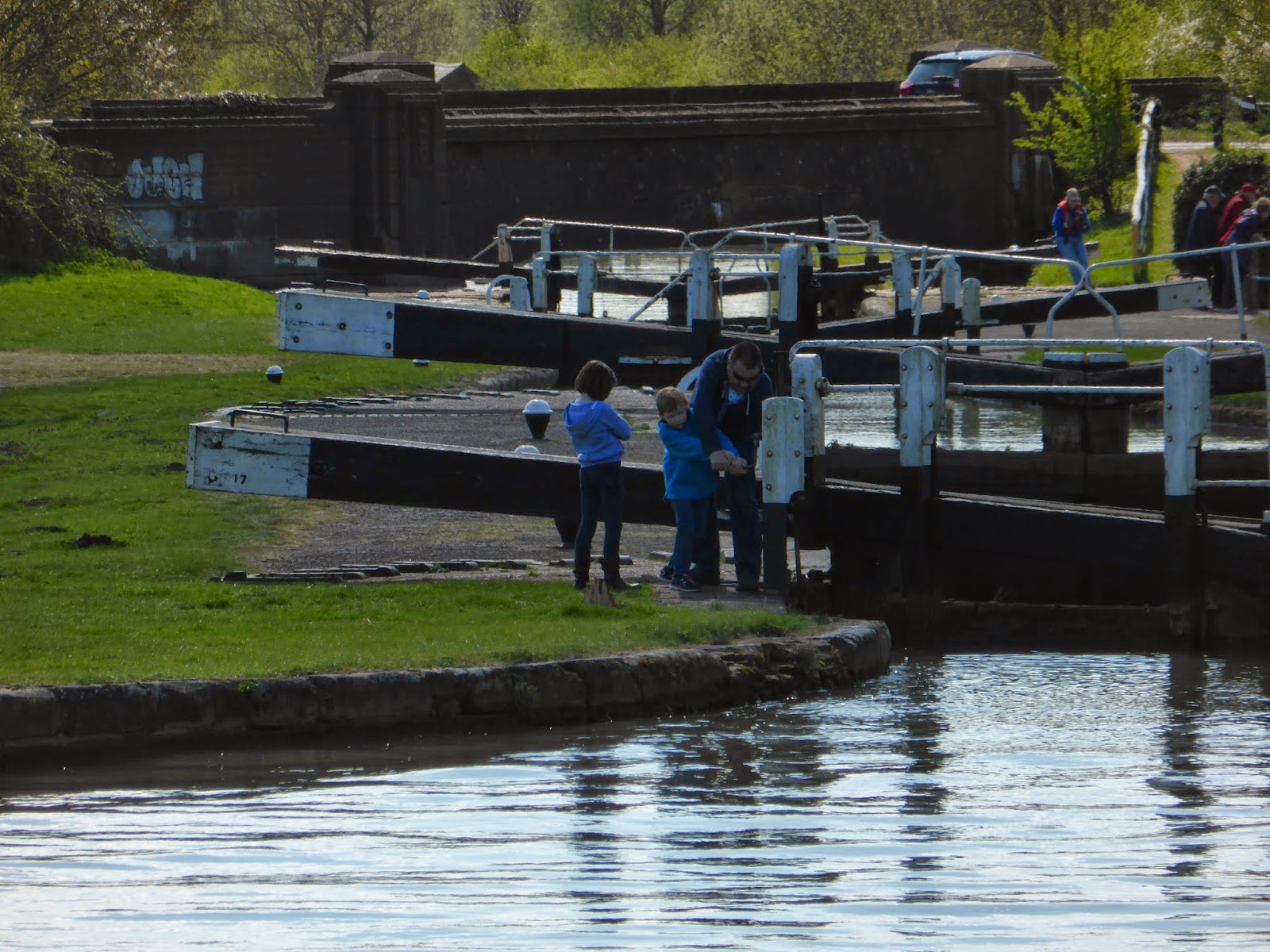 Thanks to boats coming up, and Nigel going ahead to set or help with locks, we made very rapid progress down to the bottom, where we stopped on a water point.  We had no idea how much water we had in the tank, so thought it wise to top up.  It appears we didn't have very much, as it took a while to fill -- which gave us plenty of time for teas, coffees and cookies.

Catherine and co said their goodbyes, and we set off again, continuing to just before Bridge 57 at Grafton Regis.  It's a popular spot, but there was plenty of room today and we've got a nice straight bit of piling to moor to.  We had a late lunch, then I washed the towpath side of the boat which was very dusty from having spent time In the workshop.  Out of the wind it's really quite warm, and the view from the cratch is pretty good. 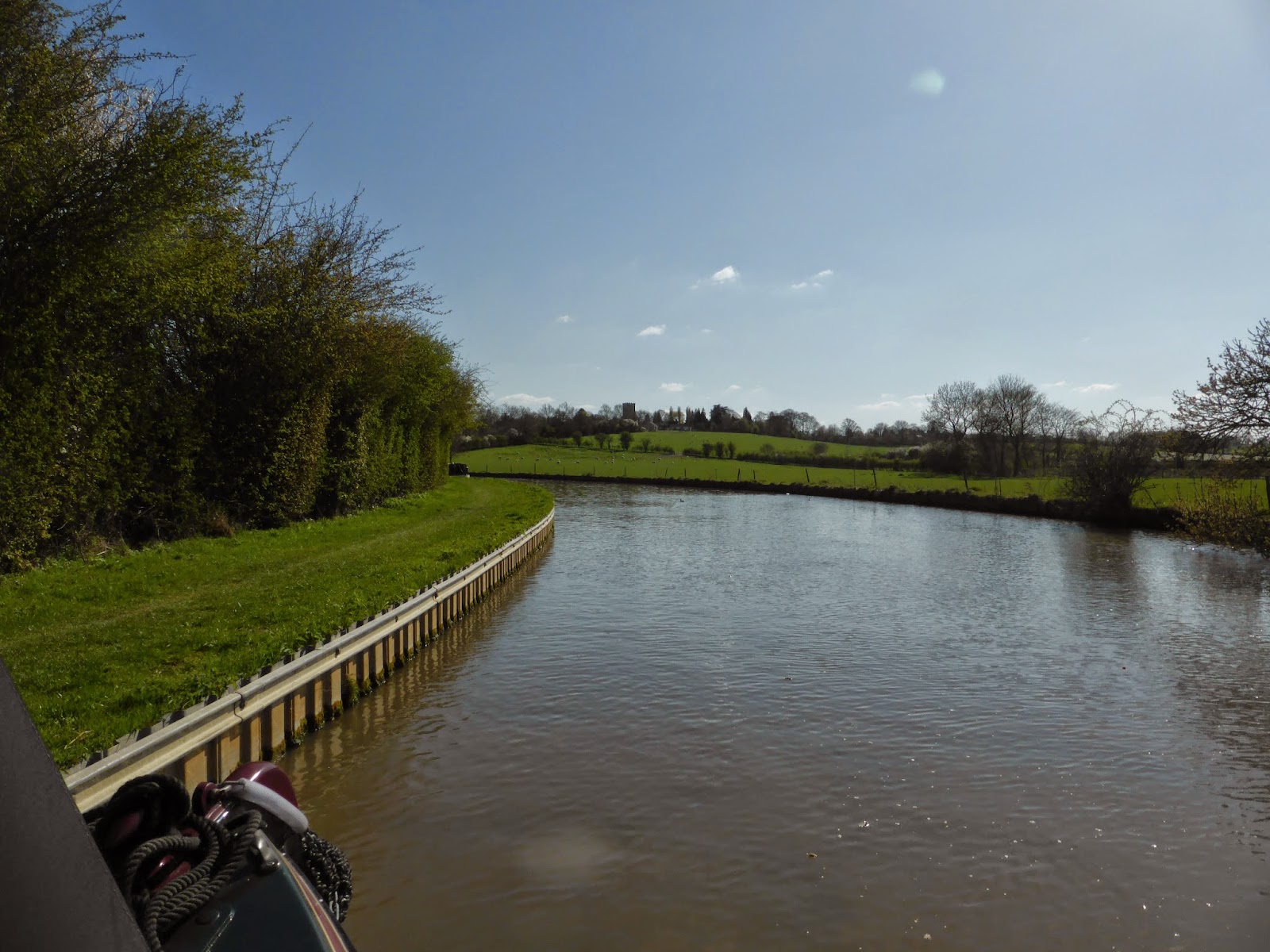 There have been loads of boats going past this afternoon.  One's just moored behind us, with the people saying they're on their way back from the Milton Keynes Canal Cleanup.  Apparently they pulled an amazing amount of stuff out of the water.

I had a boat test to do this morning at Yelvertoft Marina.  During the test, I heard a boat getting ready to leave, and it turned out to be Yarwood with Lesley and Joe on board.  We managed a brief chat before they headed off towards Foxton.

Once the test was done, I headed to Heyford Fields to drop things off at Briar Rose.  Then it was down to Wolverton Station, where Adrian was waiting having travelled up from London, and then to Thrupp Wharf to park the car.  Adrian had booked a cab, which took us back to Heyford Fields.

The next job was to pay for the work we'd had done, and then we were off.  It was about 4.15 when we reversed off the slipway mooring, and made the turn out of the marina.  As we headed south, there were lots of signs of spring, including fields of oilseed rape. 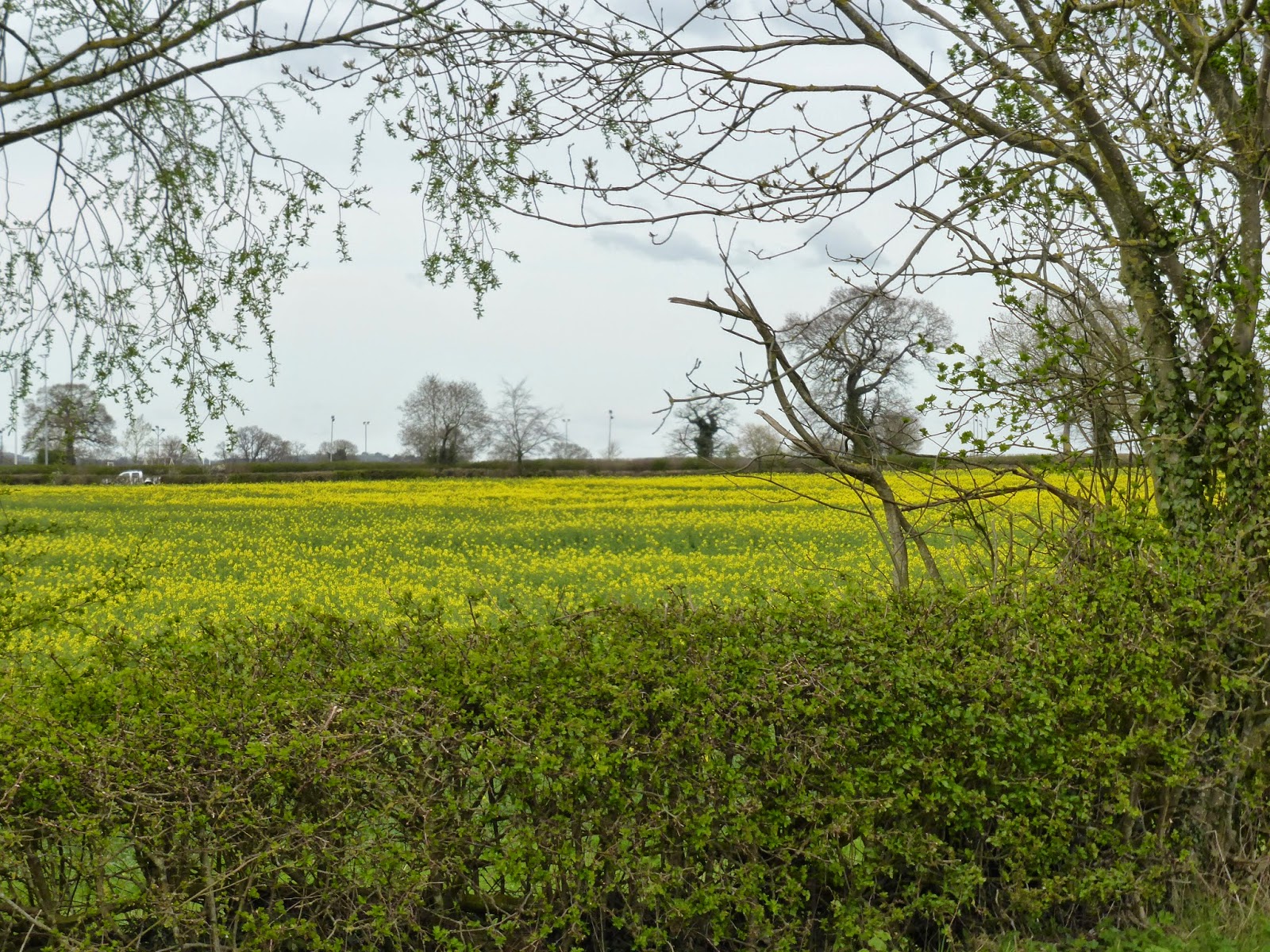 We boated for about an hour, passing a few moving boats on the way.  We've moored at a spot we've used before, just before Nightingale Bridge.  Surprisingly, there was no-one else here; it's often packed.

The reason we've had to wait so long to get the boat back is because we were waiting for our new loo to be delivered from America.  Our smelly tank has gone, and we've joined the composting club, with an Airhead toilet.  We'll see how we get on with it! 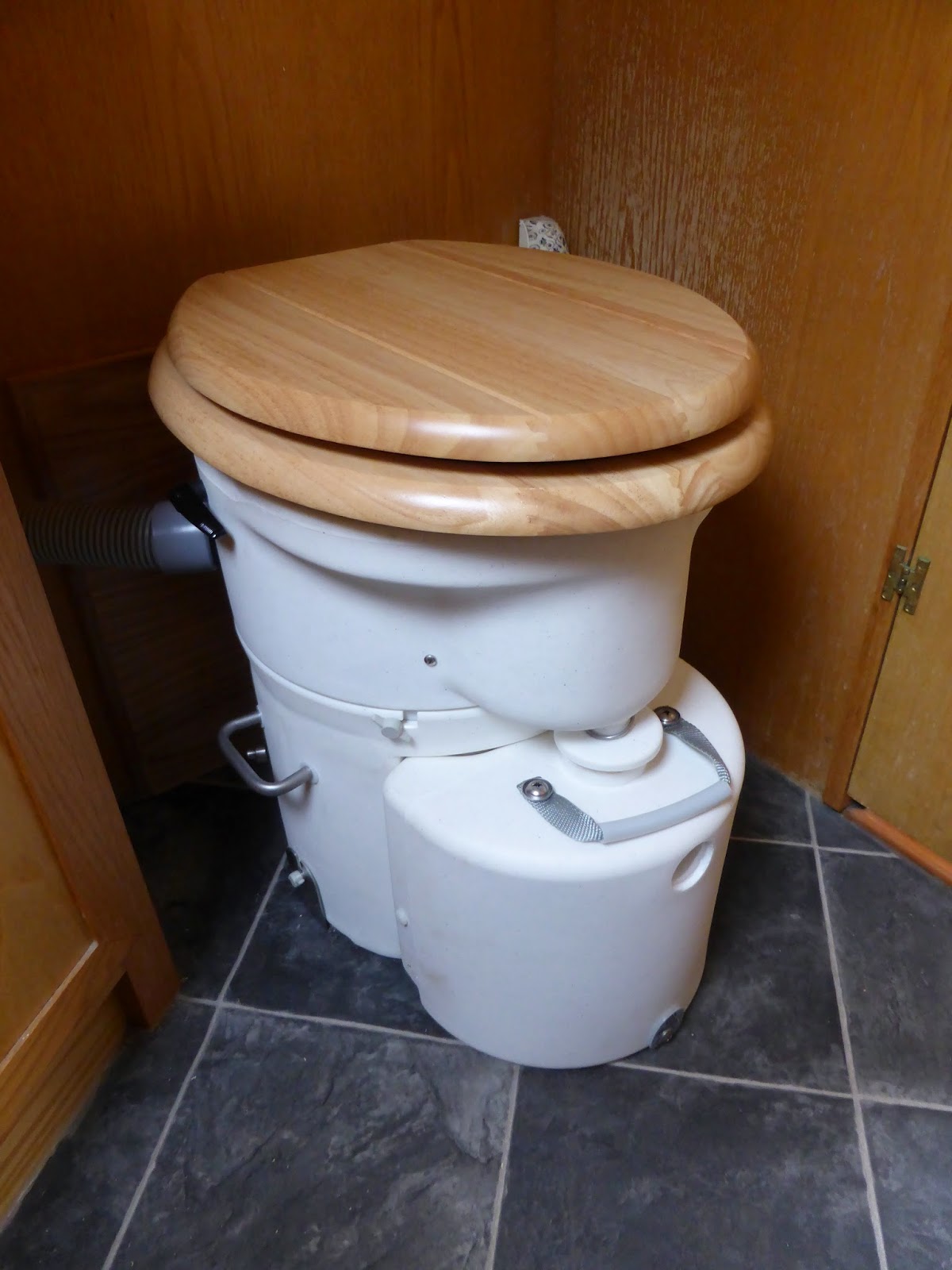 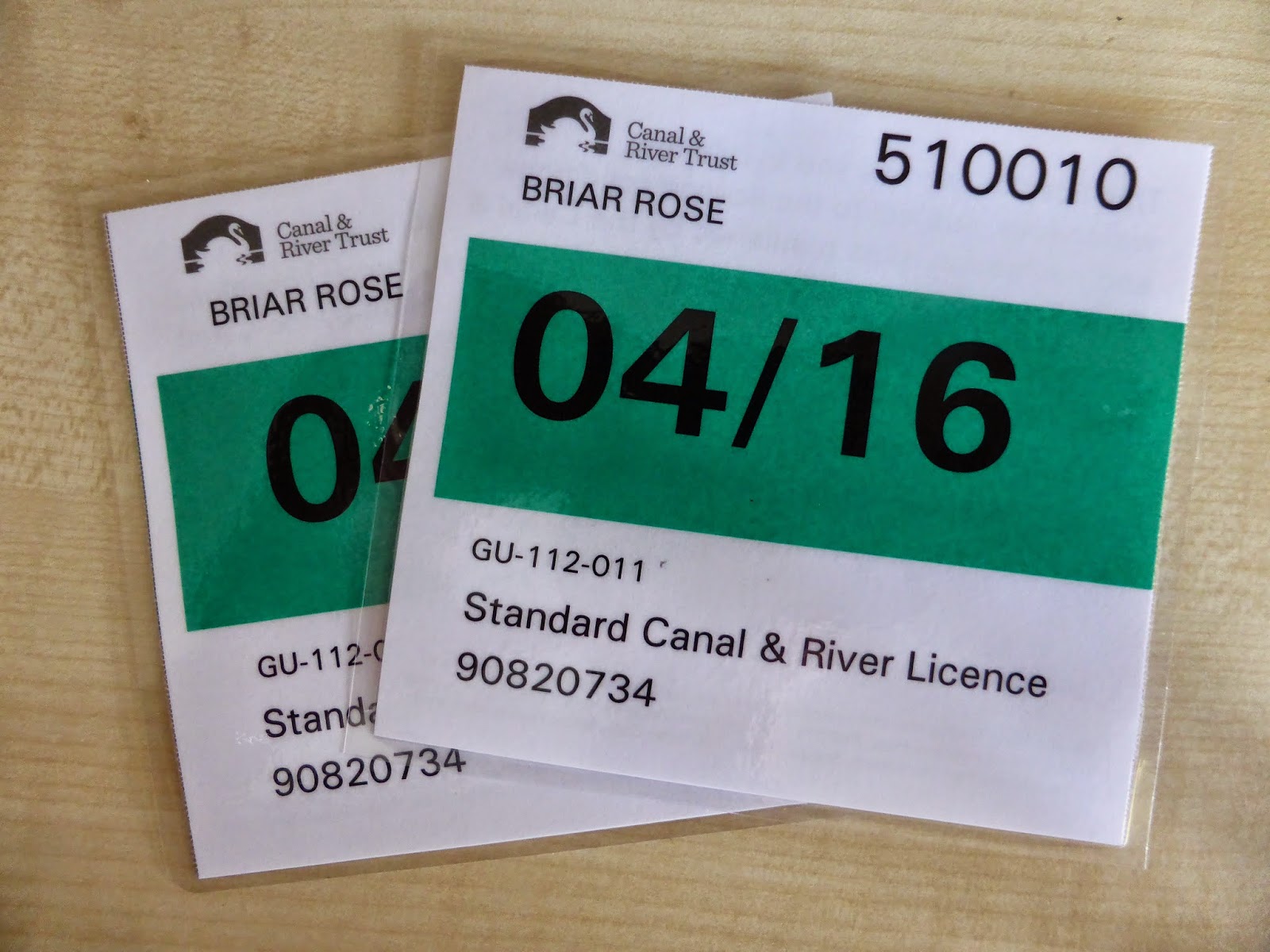 Our new licences have arrived -- and for the third year in a row they're green, which matches the boat.  As usual, I've laminated them.  We're going up to the boat this week, to take it back from it's blacking visit.  Briar Rose has been at Heyford Fields for much longer than expected, as we've been waiting for something -- something which I hope is finally being fitted this afternoon!
Posted by Adam at 14:47 No comments: 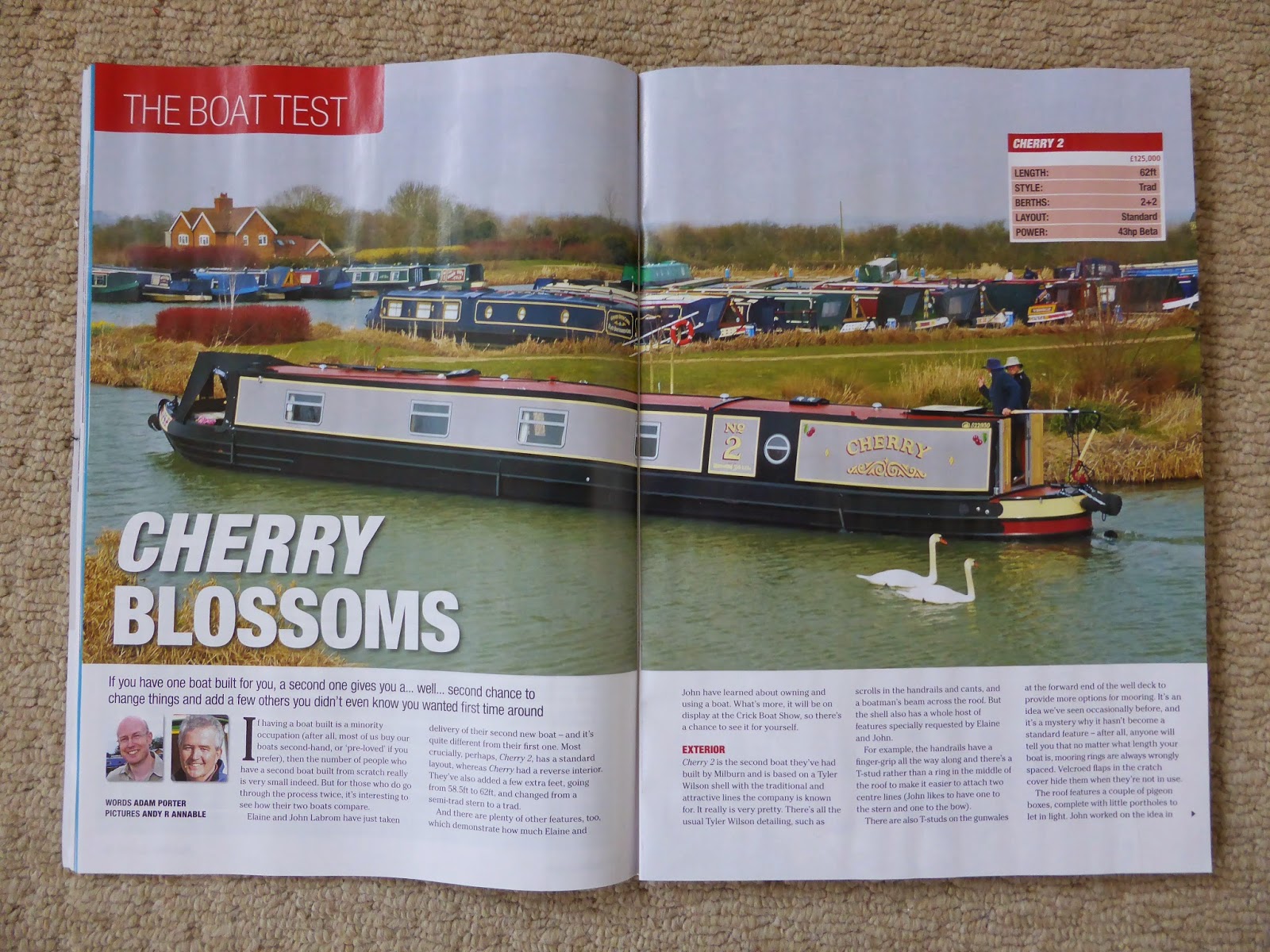 The May issue of Canal Boat is out, and includes my review of Cherry 2 by Milburn Boats.
Posted by Adam at 17:07 No comments: