A beautiful sunny morning to start, and after breakfast I washed the towpath side of the boat, as there’s clearly been some very dusty rain in the past week.  The other side is even worse, but that will have to wait until I have turned around.  At about 9.30 I set off walking back to the marina to get the car, and drove up to my second cousin Catherine’s house in Norton.  From there we all went in one car to Braunston.  Catherine, Grace, and I all got out there, while Nigel and Matthew carried on to Watford, where there was a classic car rally.  The three of us walked down Dark Lane to the bottom lock, and then down the canal to where all the historic boats were moored up. We wandered round the marina, where Catherine went to speak to her favourite canal artist, Pete Tuffrey, in the Guild of Artists tent.  Round the other side of the arm was Lamprey, owned by Sarah Edgson from Norton Canes.  A parade of boats was fairly imminent, so she asked us if we’d like a little jaunt on the boat; she was going to head home, so she’d drop us off after the junction.  So once she got the all clear from the organisers (in spite of appearances, there are organisers of the parades), we jumped in the hold and set off. 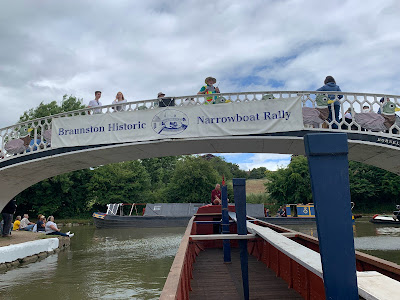 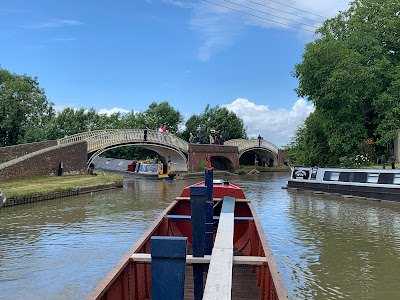 We got off at the road bridge just beyond the junction, and walked back to the junction bridges to watch the boats which use the triangular junction to turn around.  Quite a few boats were heading off, though, it being past lunchtime on the second day of the event.  We saw Ryan and Southern Cross and Alan and Kath on Sickle.  The stiff breeze across the junction didn’t help many of the boats do their manoeuvres. 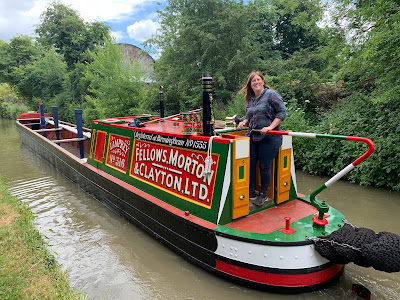 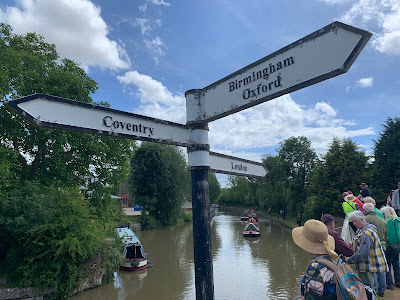 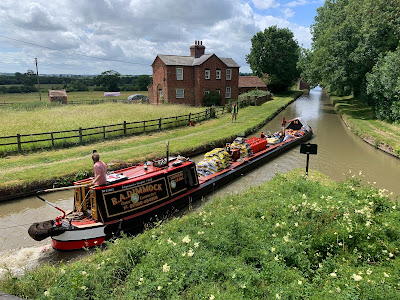 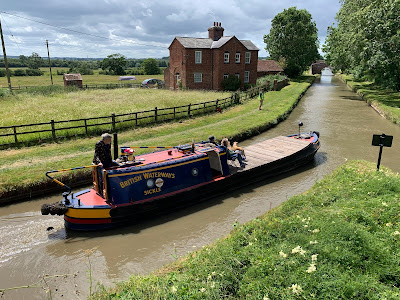 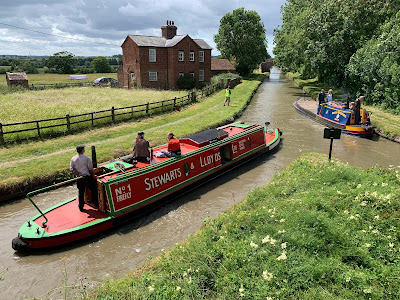 We walked back up the canal to the marina, mostly to see the chaos in the narrow sections, where historic boats in each direction are also passing moored boats.  There was a bit of gridlock for a time.  We had very nice bacon rolls from a van in the marina, and found some chairs so we could watch boats coming back into the marina.  Once Nigel and Matthew had joined us we had an ice cream, and did another circuit down to the junction and back, before heading for the car which was parked up in the village.

I drove back from Norton to our marina, dropped off the car, and walked along to the boat.  It was about 4.15 by the time I got back, so I quickly made some tea and got ready to set off.  I just did 2 miles to Grafton Regis.  Much to my surprise, my favourite spot, with views on both the canal and the towpath side was free so I pulled in and tied up.  It’s been a really lovely day, and thoroughly enjoyable.