Another beautiful start to the day, and we set off at around 8am. 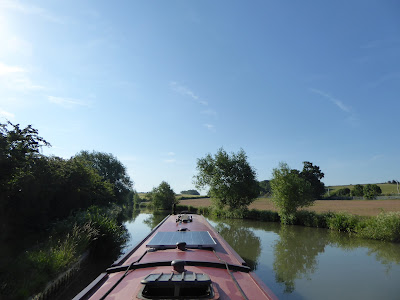 We made our way past Gayton Junction, through Blisworth, and through the tunnel without seeing another moving boat.  Stoke Bruerne looked lovely in the sunshine. 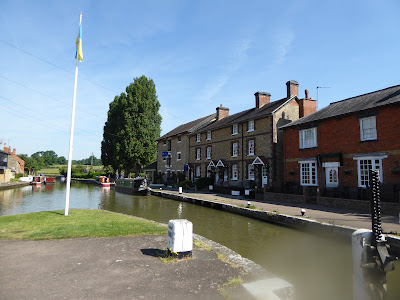 The first few locks were empty and needed filling before we could go down.  Then we could see that there was a widebeam going down ahead of us.  At the penultimate lock there were a couple of lock keepers, and then had taken the locking device off the second paddle, as the lock wouldn’t drain without it.  It turns out it’s there not because the paddle doesn’t work, but to prevent too much water going into the pound at once, as it was flood and affect the cottages alongside.  Once the widebeam was down, we then had to wait for a narrowboat coming up.  Even so the flight didn’t take much more than the usual hour and a half.  As we had plenty of time, we moored up in the prime position at Grafton Regis where you get views on both sides of the boat, and had a rare stationary lunch.  When I was here back in March, the River Tove was flooding the fields, and the weir from the canal was dumping even more water into it; today, you could only tell there was a river there by a lush green stripe of reeds across the field. 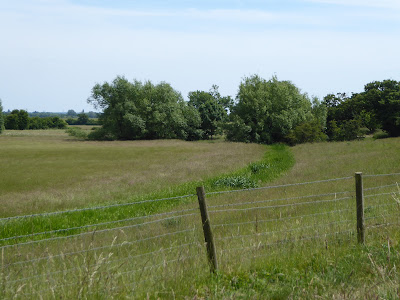 We set off again about 2pm and arrived back at our marina about an hour later.  Since then we’ve been sorting things out, including going to collect Adrian’s car from a car park in Milton Keynes.  Tomorrow we are off to the Black Deer music festival for the weekend, so everything we need for that is going in one car, and everything we’re taking back but don’t need there is going in the other.

I looked up Black Deer. Never knew you were into that stuff. I only knew 4 of the acts, but then I don't supposed it's aimed at 75yo's. I really like Imelda May and was bowled over by her work with Jeff Beck. Van Morrison? Well what can I say. Someone once told me that when it comes to VM, there are two sorts of people - those who like him and those who've met him. I really couldn't say.

I hope you and Adrian have a great time anyhow.