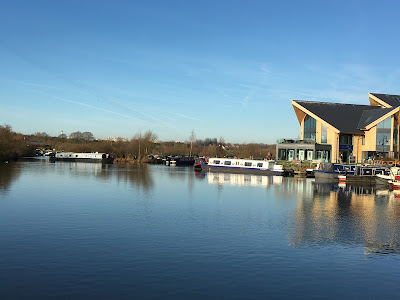 To a very sunny but cold and frosty Mercia Marina for a boat test today.  It was also good to catch up with Sheila from Sanity Again for a drink in the tea rooms before we got started.
Posted by Adam at 20:37 No comments: 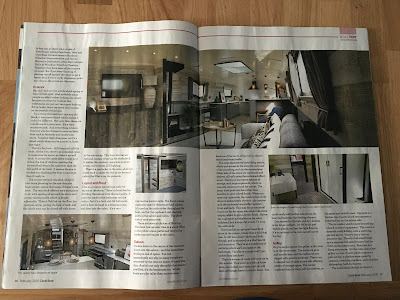 The February Canal Boat is out, and includes my boat test on Collingwood’s Hoxton widebeam.
Posted by Adam at 14:19 No comments:

I drove up to the boat after an early shift yesterday, and soon had the fire alight.  It was an early start this morning: I met Andy the photographer at the Bicester park and ride at 7.30 and we travelled up to Cheshire for a boat test together. The weather at Aqueduct Marina was better than expected, the locals were friendly, and the cafe was good. 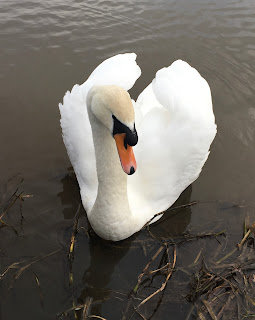 On the way back, I had a call from Tim Garland, the cratch cover man, to say ours was fixed.  So rather than head straight home from Bicester I went instead to Milton Keynes to pick it up, and then put it back on the boat in the dark.  With a drive home to follow, it was a fairly long day.
Posted by Adam at 22:30 No comments:

Dull and chilly today.  We set off at about 9.45, with just the familiar miles back to the marina to cover.  Little of note happened, but it was busy at Cosgrove Lock, with a boat on the water point, another waiting on the other side of the winding hole, and a little boat coming down.  It meant we had a bit of hanging about, but nothing too bad.

Back at the marina, I did probably my best ever spin and reverse into our berth, even if I do say so myself.  We tied up, packed, had lunch, did our bit of winterising, and set off for home.  On the way, I took the cratch cover to Tim Garland for repairs, following the M5 tunnel incident in September.

It was a bright but chilly morning, and we set off at 9am.  Once again there was very little water in the pounds at the Three Locks, but at least we were taking a lock full down with us.  The top two locks had a bottom gate left open, which didn’t help. 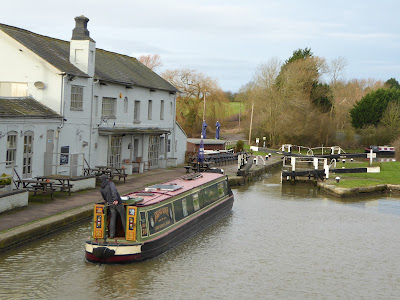 Stoke Hammond Lock also had a bottom gate open and needed to be turned. 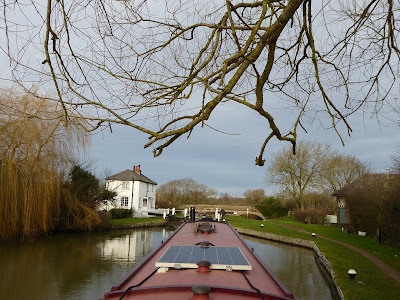 Fenny Stratford Lock was also empty.  As Adrian was swinging the bridge back over the lock, a cyclist who was waiting to cross commented that this lock was a lot of palaver for only a six inch drop.

We saw more boats on the move today than the past couple of days put together.  This was probably the most unusual. 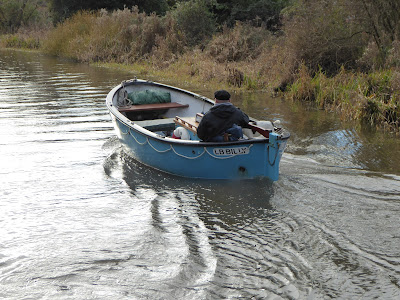 We counted off the bridges through Milton Keynes, making slow progress because of all the moored boats.  There seems to be a new sculpture, a dragon fly made from an old shopping trolley. 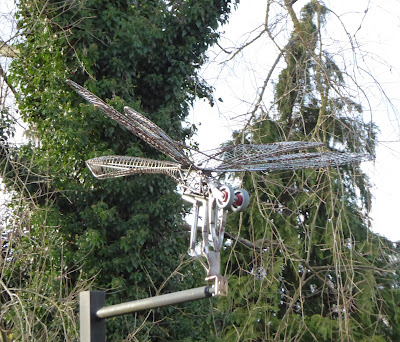 We were aiming for the moorings at Stanton Low, by Bridge 75.  There were more boats here then when we passed on Thursday, but there was enough room on the end, and we have a view of the ruin from the towpath side. 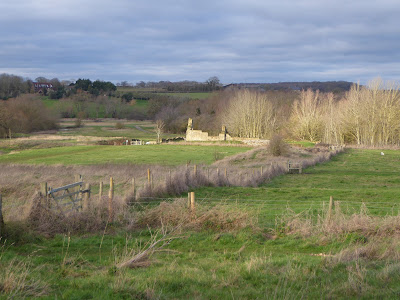 Having moored up, I walked down to the tip by Bridge 74 with some old engine oil that I found in the engine hole the other day, and which we must have been carrying around for some considerable time. Cars were queueing to get in.  I came back via the little Asda where I bought some battery top up water, and walked across the parkland.  The batteries have had a much needed top up.

It rained quite heavily during the night and there was another brief shower while we had breakfast, but it soon dried up and we set off at 9.20.  It was pretty grey and chilly.  Immediately after the first bridge we were interested to see how the building site had come on since we were last here at Easter; Campbell Park Marina is now pretty much full. 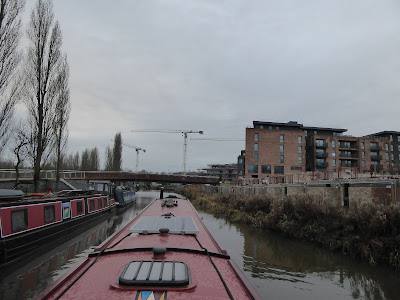 We plodded through Milton Keynes.  It’s pretty slow going because of all the moored boats.  I began to estimate how long we could go at a stretch without having to slow down to pass a moored boat — and I reckon it was no longer than two minutes.  I came over all Brenda from Bristol each time we turned a corner to find more boats sat there.

At Fenny Lock the gates were open but we still had to stop first because the bridge needed swinging out of the way.  Gradually the sky behind us was clearing, and by the time we got to Stoke Hammond Lock the sun was out.  We continued to the water point below the Three Locks, where we filled the tank while having lunch, which was the left over of last night’s chilli on toast. 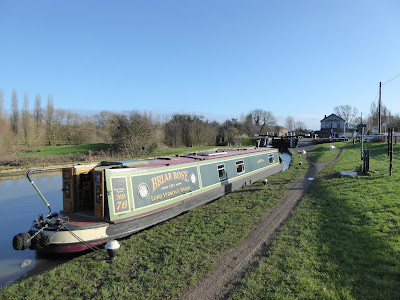 The Soulbury Three Locks either have masses of water or not enough.  Today was not enough.  A boat had gone up before us, and a lady who’d helped them and was returning to her car said it had taken them ages because the pounds were so low.  I walked up the flight emptying locks, and then ran some water through the top lock into the pound below.  I feel sure there must be a leak in that pound, because the level seemed to drop very quickly.

The Jackdaw Pound, above the locks, is really nice, and looked particularly good in the sunshine. 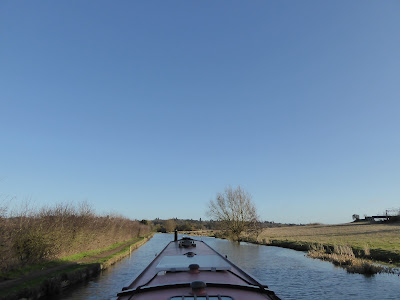 We carried on to the winding hole at Old Linslade, turned around, and returned to a favourite spot by Bridge 109.  We have a nice view out of the galley window — although the West Coast Main Line is right there.  We have been watching all the former Virgin trains going by, now naked of livery, but have also seen a couple in Avanti West Coast colours. 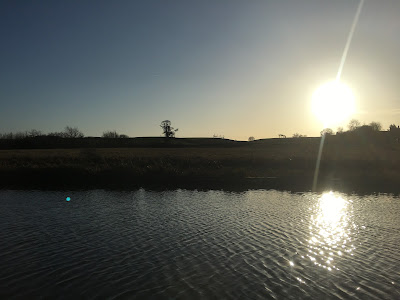 I had a pleasant surprise on the way home from work last night — the timetable suggested the train would take almost an hour to get to Milton Keynes, but in fact it was just 35 minutes; it was then due to wait there for 25 minutes.  It meant I was back at the boat before the train had departed again.

I had parked in Cosgrove, so needed to move the car back to the marina this morning.  While I was doing that, I made a quick visit to Tesco for a few forgotten items.  The walk back along the towpath between the marina and the boat was very muddy.

We set off about 10.15.  It was chilly and breezy.  We went down Cosgrove Lock, and headed for Milton Keynes.  There is a sunken flat on the aqueduct moorings and a CRT work boat was approaching to presumably try to raise it.  There were also a few other boats on the move, including one we met at the awkward Bridge 75.  Another was a wide workboat, which has a sign on the side saying it was going to help with the restoration of the Buckingham Arm.  It was pushed, slightly out of control, by a very small tug. 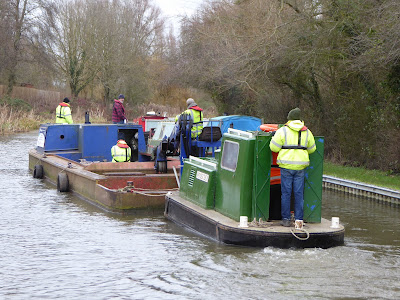 The moorings at Campbell Park were full, so we continued just round the corner and moored immediately before Bridge 82.  It was well before 2pm, but it’s a bit breezy and cold.  Adrian started making a chilli as we came along, and that’s now bubbling away on the stove.

I had a lovely New Year’s Eve evening with Catherine, Nigel, Grace & Matthew on NB Rowington. We had fun playing Articulate, a game both Grace & Matthew are masters at! Adam arrived at 11:30pm, just in time for a game of Uno!, and to see the New Year in with us. 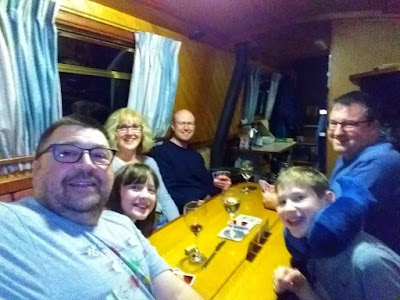 We watched the fireworks from London, and enjoyed a few drinks, before turning in around 1:30am.

Both boat crews were late to rise on New Year’s Day.  The Rowington gang joined us for breakfast on Briar Rose, well they brought their breakfast with them, and we provided the tea and coffee.  All too soon it was time for Rowington to head back up the Stoke Bruerne locks.  Adam helped them up the first couple of locks, before driving to Milton Keynes station to get his train into London.

I readied Briar Rose before setting off to Cosgrove.  As I approach the Navigation Inn I saw friends Thelma and Martin out on their New Year’s Day walk (they knew I’d be in the area, so seeing them wasn’t a total surprise!).  They came aboard at Cosgrove for a drink an a catch-up.

I spent a quiet evening on board, and was joined by Adam at 11pm when he got back from work. Adam is now off for the next few days, and we’ll be spending the next 4 days aboard.