Dredging on the Mac

This morning I left in the dark, and it was dark again by the time I got back. In between was a drive up to Cheshire for a boat test. The weather wasn’t as dull as forcast, and the prodicted showers never arrived. We’d planned to trun the boat at the winding hole by Bridge 20, but it was being dredged; fortunately there’s another one a mile further on. Just beyond Bridge 20 is where the dredgings were being dumped. As we came back, the process was in full swing, with a full pan being emptied. 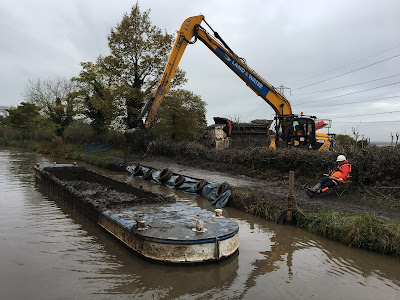 A digger was getting the silt out, and putting it in a machine just over the hedge which sifts out all the debris. Then the silt was beimg sprayed all over the field. The whole area looked a complete mess! Still, the Macc badly needs dredging, so you can’t really complain. Apparently all the dredging gear got stuck in a bridge hole on the way up, rather making the point.

Ian was doing the photos today, and we went to the nearby Miners’ Arms for lunch afterwards. The food was pretty good, but there seemed to be a bit of a staff shortage, with things taking quite a long time.

Tomorrow morning, another early alarm as I’m due at work at 6.30.

Kingfishers and other things

I mentioned during our September trip that I’d seen far more kingfishers than ever before — some days so many that I stopped counting them. So when the wildlife expert Chris Packham was in at work a few days ago, I took the opportunity while he was waiting to go on air to ask him why there appear to be so many this year.

He said the main thing that dents their numbers is a harsh winter — sixty per cent can be lost in a really bad one — but the past few years have been very mild, so their numbers will have been maintained. In addition, they breed very quickly, with pairs having two or even three clutches of eggs a year. They lay eight to ten eggs, and if all goes well, they’ll get six or eight chicks to fledge. That makes September prime kingfisher spotting month.  Chris also said that it’s very difficult to tell a mature adult kingfisher from a young one because they grow to full size quickly (they’re smaller than you think) and they get their adult feathers quickly too.  He said wrens follow a similar pattern, with their population taking a big hit in a hard winter, but numbers bouncing back rapidly over the next couple of years. Interesting stuff. 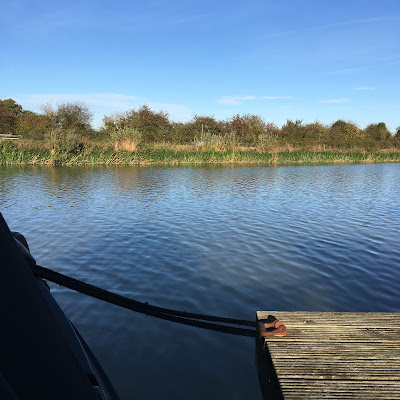 I’ve driven up to Briar Rose this afternoon, as I have a boat test tomorrow. It’s been much sunnier than forecast all the way up — and we could do with the same tomorrow, which isn’t forecast to have much sun at all.

I thought I’d better put aome water in the tank, as the last time we filled was in Braunston a couple of days before the end of the trip. It was really very pleasant out on the well deck, looking across the marina.
Posted by Adam at 16:17 No comments:

A first today — a bit of boating on the Lancaster Canal. Andy the photographer picked me up at Towcester at 7am and after a journey that was rather slow in places we got to our destination at 10.30. The weather was better than expected, at least at first, so we set off on the test boat to get the shots of it on the water. The section of the Lancaster we covered (only a couple of miles) was very pretty, with some lovely views — none of which I took a photo of. We were all done by about 1.30,and the journey back was a bit quicker. I’m staying on board tonight, and will go back home tomorrow morning.
Posted by Adam at 19:29 No comments:

When we had a visit at Kingswood Junction from my father’s cousin, Horace, (which makes him my first cousin once removed), he brought us a piece of art. Horace is a photographer, and Kaleidoscope IX from 2013 uses some of his photos cut up and rearranged.

The red parts are from photos of narrowboats — you can see occasional recognisable bits, like a dolly or a bit of sign writing. We’re keeping this lovely present on the boat, and it will remind us of that visit.

I came up to the boat this afternoon, as I have a boat test much further north tomorrow. Sunday lunchtime seems to be a good time as there was very little traffic. The boat was fine and the solar panel has apparently still be doing its thing as we’ve used nothing off the electric meter. I had a look at the loo, and as the contents looked very dry and crumbly (even after only a week away) I emptied it. Tomorrow will be a pretty early start.
Posted by Adam at 17:30 1 comment: 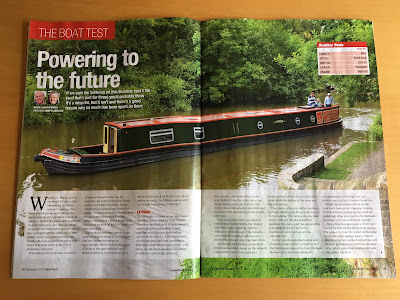 The November issue of Canal Boat is out, and includes my boat test of Jenny Rose by Braidbar Boats.
Posted by Adam at 19:10 No comments:

Here's the route we've covered over the past five weeks. 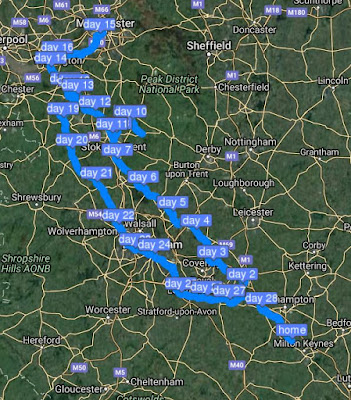 
Bold indicates waters we hadn't been on before.

We turned round at:
We travelled through fifteen different tunnels, and did seven of them twice (in bold).
In total, we spent just over eleven miles under ground.
Posted by Adam at 09:37 1 comment:

Just five miles to return to the marina, and we set off at 8 in rather dank and dark conditions. At times it rained a bit. Just past Grafton Regis bridge, a kingfisher was sitting on the tiller of a moored boat, and stayed as we went past. I still didn't manage to get a completely in focus picture. 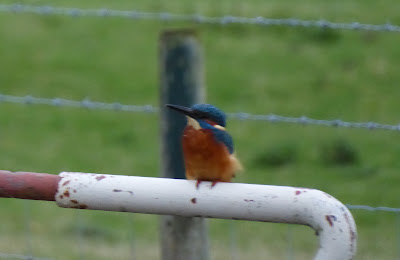 A bit further on, a squirrel was feasting on fallen apples. 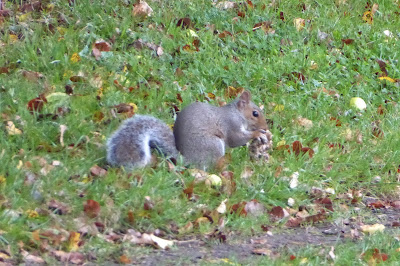 We made the turn into the marina after the usual hour and a half, and reversed easily enough into our berth. Adrian had spent the travelling time sorting stuff out, so it was just a matter of getting bags from the car, packing things, and loading up. Adrian left first but got home second, making the mistake of choosing the M40 rather than driving through the middle of Bicester.