Christmas Day dawned much calmer. We had breakfast and presents, and a very relaxed start to the day. We decided about 10am that we'd set off -- which was when we had a repeat of the engine starting problem from earlier in the year. The symptoms weren't quite the same, and will need further investigation at so,e point. We got the engine going by hotwiring it from the domestic batteries.

It wasn't as rainy as forecast, but it was predicted to get much windier during the day and even more so tomorrow. So we decided we'd head back to the marina so we could get back to our berth without having too much of a battle. We arrived back about 12.30 -- and then started cooking our Christmas dinner. It was ready a couple of hours later. 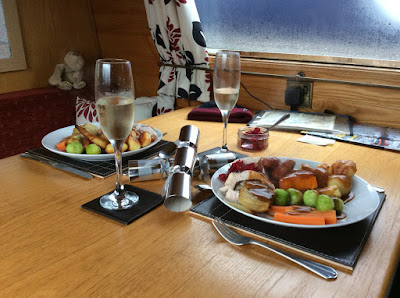 The weather has really taken a turn for the worse over the past couple of hours. There are waves on the marina, and the ducks are bobbing up and down like nobody's business! We'll have a quiet time for the rest of the day, and then tomorrow morning we're heading for home, via Kent.

It was exceptionally windy overnight and this morning -- the forecast was gusts of over 40mph. The tall buildings at Wolverton make things worse, and we were being rocked about quite a lot. Consequently, we delayed our departure until things had quietened down a bit. I wasn't idle in the mean time, though, making a dozen mince pies (with pastry I made last night) and a couple of jars of cranberry sauce. 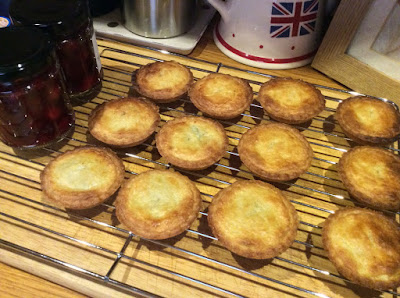 We finally set off at 10.30; it was still quite blustery, and as soon as Adrian let the rope go at the bow, the boat headed off to the far side of the canal. We winded at New Bradwell. The wind was from behind us, so I made an early turn into the winding hole and the back end shot round like nobody's business. I then had to use quite a bit of power to get the nose to turn back into the wind.

Shortly after we'd turned there was a brief torrential downpour. We carried on back towards Cosgrove, wondering how far we'd go. We decided to go up the lock, and as we did so we could see breaks appearing in the clouds. As we knew we'd have to run the engine a bit longer to charge the batteries, we decided to carry on with our original plan -- to go along to the bottom of the locks at Stoke Bruerne. In just a few minutes, there was blue sky and sunshine although it was still quite chilly and breezy. We had lunch of soup and toast on the move.

We moored up at the bottom of the locks, then in the afternoon walked up to the village to see Kathryn, who arrived home yesterday nearly eight weeks after tripping over and breaking her hip. We took her some mince pies and a jar of cranberry, and spent an hour or so hearing about her operation and treatment.

Tomorrow is supposed to be a lot calmer, so we'll head back the other way.

Adrian came up to the boat first thing this morning, arriving around 9.30. He got the boat ready for cruising, and did a few other jobs such as buying an electric card for the meter. He set off just before 12 bound for Wolverton. The main point of interest along the way was giving a tow to a boat which could only go forwards but wanted to go backwards! It sounds as though it wasn't an entirely successful enterprise. 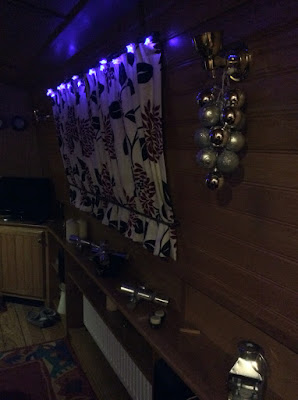 I've been to work, and then got the train up to Wolverton Station. It's just a very short walk round to the moorings.

I came up to the boat yesterday afternoon. It was much chillier inside than outside. I did a few jobs, like making sure the new shower mixer bar fitted and worked, and put some water in the tank. I lit the fire, and within a short while the boat was much warmer. 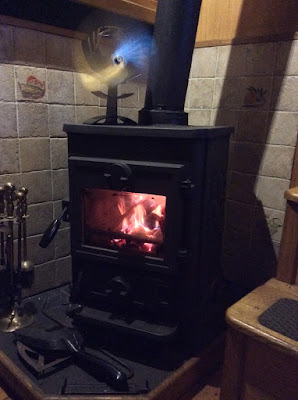 This morning was an early start, heading up the M1 and M6 to Northwich for a boat test. It was a nice enough day, and we did well to miss the sharp showers that blew through. In the afternoon, I went to visit my sister and family -- including going to cut their chosen Christmas tree, which my nieces, Rachel and Emily, then decorated back at home. 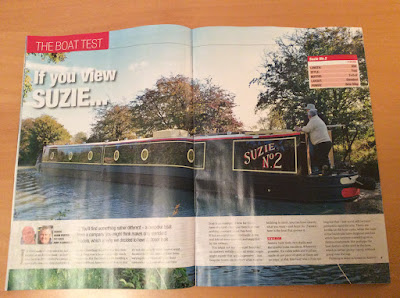 The January edition of Canal Boat is in the shops, and includes my boat test of Suzie 2, by Aintree Boats.
Posted by Adam at 16:23 1 comment: