I drove up to Briar Rose after work last night. I thought leaving at 6pm might mean a slow and tortuous journey, but in fact there was very little traffic and no delays. The same could not be said for the M1 southbound, where there were two accidents and long queues.

When I got to the boat I found the inverter/charger control flashing, and the batteries pretty much empty. I'm not sure what had gone wrong, but I turned it off and on again, which seemed to do the trick. It took a while to get the batteries up to a reasonable level, though, and it remains to be seen if they've suffered because of it.

As I was closing up the back of the boat at about 10pm, I took some photos of the Strawberry Moon, which this year coincided with the summer solstice, for the first time since 1967. 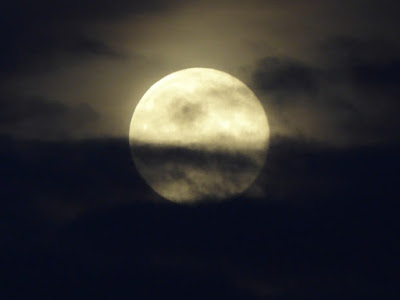 This morning was lovely and sunny, and I drove up to Weedon for a boat test. We used the winding hole by Weedon Wharf. 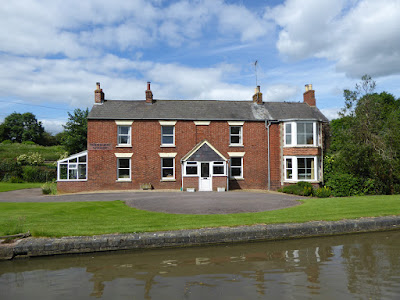 Just as I'd completed the turn, a boat came through the bridge so I waved it past; then two more came through, plus one going the other way. It didn't particularly matter, because by then the clouds had built a bit, and we were waiting for the sun to come out from behind a cloud.

By lunchtime, I was on the road heading home. 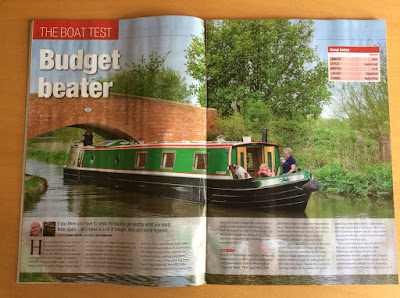 The July issue of Canal Boat is out, and includes my boat test on Hang Loose by Cherilton Narrowboats.

To Heyford Fields for a boat test this morning. I walked back to the marina to collect the car, and then drove up the A5. The weather was perfect -- I can't actually remember the last time we did a boat test in such nice conditions. We were all done in good time, and I was back at the boat in time for lunch.

I didn't want to leave myself too much boating to do this evening, so I moved the boat up through the lock. As I arrived, a boat was coming down; as I went in, a Wyvern hire boat arrived to share the lock with me; and as we left, another boat turned up to go down. I moored in Cosgrove village, and as my night shifts start tonight I wanted to get some sleep. It wasn't really ideal for sleeping, being very sunny and hot -- so I left the stern doors open to get some air through, and just closed the bedroom doors. 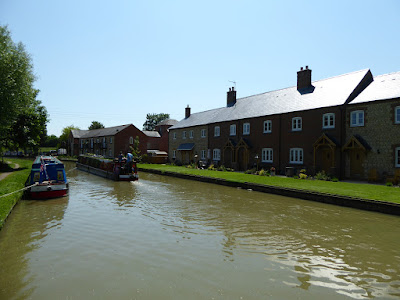 This evening I had dinner, made a phone call to the test boat's owners, and then set off back to the marina. People look at you rather oddly when you untie at 7.15pm, but it's a really lovely time to be boating. It was sunny, warm, and very still. A hot air balloon floated overhead. 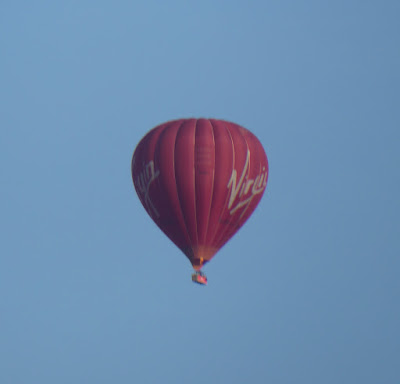 The one disadvantage of arriving back at the marina at this sort of time is that there are lots of people about, including our neighbours sitting out on their back deck. So I was glad to make a pretty good spin and entry to our berth. I have a little bit of packing up to do, then in a few minutes I'll be in the car and heading down the M1 to work.

I came up to the boat after a late shift yesterday, as I have a boat test to do. It was originally planned for today, but has been shifted to tomorrow instead -- which meant I had a spare day on board. I needed some food, so had the choice of spending an hour going by car, or all morning going by boat; naturally I chose to go by boat.

I set off at around 9.30 from the marina, and was glad I was heading towards Cosgrove rather than Stoke Bruerne, as there was a boat moored opposite the marina entrance, right in front of the no mooring sign, which would have made the turn north a bit tricky. It wasn't as sunny or warm as forecast. At Cosgrove Lock, a boat had just gone down, so I had to turn it. I was keeping an eye on possible mooring places, and there were several in Cosgrove and more below the lock.

When I got to Wolverton (having spent most of the journey at tick over because of the number of moored boats), the moorings were completely empty. There was no breeze either, so it was probably the easiest I've ever moored there. I made a quick dash to Tesco, then prepared to set off again heading for the winding hole at New Bradwell. Just before the Grafton Street aqueduct was a heron. 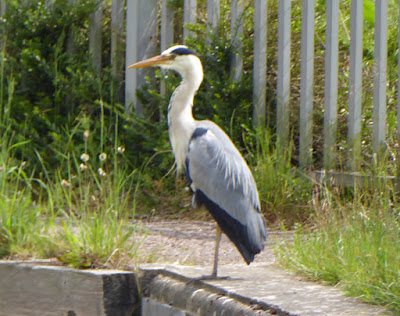 A Wyvern hire boat was close behind me, so I let them pass me before the aqueduct, rather than hold them I while I turned. When I got to the winding hole, a little cruiser was coming the other way, so I was slightly later making the turn into the hole than I would have liked. However, all went well and I was round pretty quickly; a little Sea Otter which had been behind me waited while I turned, and joked that he was able to turn around pretty much anywhere. On the return journey the sun came out. I tried a panoramic photo of the Grafton Street aqueduct.

I carried on across the Wolverton aqueduct, and pulled into a nice sunny mooring between the aqueduct and the lock. This afternoon I've done lots of jobs: I've taken everything off the roof and scrubbed it (although it was too hot, really); I've checked the batteries, and topped up the few cells which needed it; I've checked all the fire extinguishers; I've swept all through the boat and cleaned the shower room.

It's been quite busy, with plenty of boats going past, and lots of people walking, running, and cycling on the towpath. The forecast looks good for tomorrow, too.

I went to the Heron Maps stand at the Crick Show, to collect a couple more maps that have my photos in them. 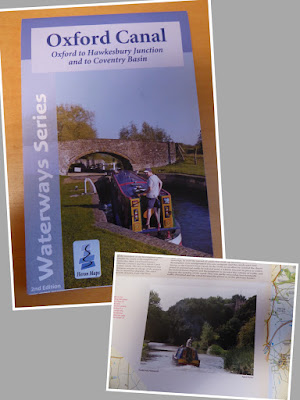 The Warwickshire Ring map has a photo of Sickle passing Pooley Hall inside; but the Oxford canal has a photo of mine on the cover -- Adrian and Briar Rose in one of the diamond shaped locks.

Flaming June dawned grey, dank, and drizzly. We were up pretty early again, and set off about a quarter to eight; at Gayton Junction we reversed onto the service wharf to fill with water -- not that we particularly needed water as it was the last day of the trip, but so we could put a wash load on, for towels which live on the boat.

Through Blisworth tunnel, I managed to get decent shots of the two side shafts which link to an air vent which is off the line of the tunnel. 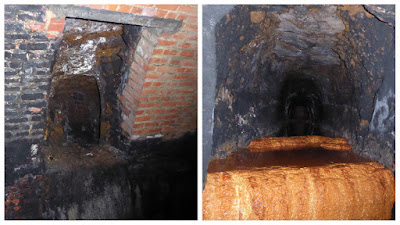 On the Stoke Bruerne side of the tunnel was a fairly dramatic scene -- a tree had come down on top of a moored boat. We saw some of the owners later, and they said it happened at half past midnight, and that because of the shape of the tree, the boat looked pretty much undamaged. 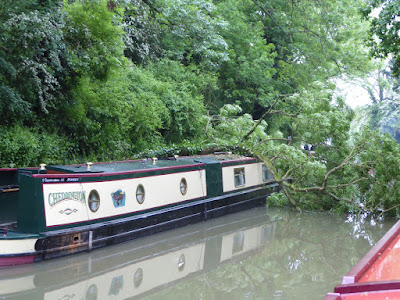 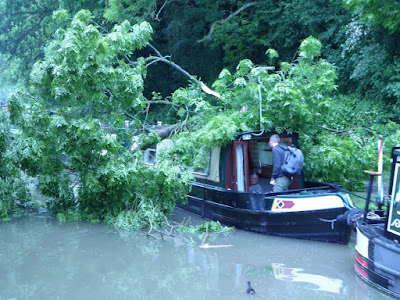 There was just enough room to get round the tree, so we made our way to the top of the locks. We had a quick chat with Kathryn while the lock was filling, and Mike from the trip boat. The volunteer lock keeper told us that a hire boat had gone down the second lock, and he'd asked them to wait for us at the third. When we got there, they were already going down with another boat. Two small boats, both single handers, were next in the queue. As we came along the long pound, two more boats pulled out to go down, and we knew there were two more behind us -- so seven boats in total waiting for the third lock. When it was our turn, neither of the pairs of boats behind us wanted to split up, so we went on alone.

After the locks, Adrian made some toasted cheese sandwiches for lunch as we went along. We got back to the marina at about 1pm, and although the direction of the wind didn't make it easy to get into our berth, we managed ok. About 45 minutes later we were in the car and heading home.