Ann came with us on several boating trips, when we had a share in Debdale.  The first time, it's fair to say she was rather worried by the whole thing and arrived by train and taxi at Calcutt (where we'd done our Helman's Certificate) in a state of some anxiety.  That evening, we just went up one lock from the wharf and moored.  The next day turned out to be one of my favourite ever days boating.  It was warm and sunny; the Napton flight was busy, and it took much longer than it should have done.  In spite of the slow progress, everyone was in good spirits.  When we reached the summit pound, I steered while Adrian and his mum sat in the well deck talking, taking in the views, and enjoying the sunshine.  It was just glorious.  We finished the day at Fenny Compton, and the Wharf Inn, and the trip took us all the way down to Oxford and back.

After that, she booked herself into our plans regularly.  Ann came with us to Foxton and Market Harborough on one trip, and another when we went to the end of the Ashby and down to Coventry basin.  She also came to Stratford, and Birmingham, which she was fascinated by.  On that trip, we went to the Black Country Museum, my lasting memory of which is leaving her sitting outside the coal mine, while we did the tour.  When we emerged, it seemed that she'd chatted to most of the other visitors to the museum.  We also took her along some of the waterways that I suspect may serious boaters haven't travelled, because from Dudley we turned onto the Wyrley and Essington (where Adrian steered while Ann and I stood at the bow pointing out the worst of the rubbish, so we could avoid getting it round the prop), and onto Walsall basin for the night; we returned to central Birmingham via the Walsall canal.

When Debdale moved to Norbury Junction, Ann came with us to Stourport and then down the Severn to Worcester.  She wasn't keen on the river (not as much to look at as on the canals), and took against Worcester quite understandably when we were woken in the early hours by drunken students running up and down the roof.

Then we had a new year trip to Audlem.  New Year's Eve was spent at Market Drayton, and at midnight we watched the canal starting to freeze.  The next day, we were ice breaking for quite a while.

On every trip, you'd suddenly become aware that towpath walkers were chatting away to the front of the boat, and you'd realise that Ann was in the well deck.  Barely an hour went by without tea (and more than likely biscuits) appearing at the back of the boat for the crew.  And through the course of the week, anything brass got cleaner and cleaner.  In fact, everything got cleaner and cleaner.

Ann wanted to visit Briar Rose, but she was never well enough, which is a source of great regret.  However, it was a great pleasure to introduce her to the canals, and I was so pleased that she enjoyed her weeks on board with us -- and not just the countrside but the gritty industrial areas too. 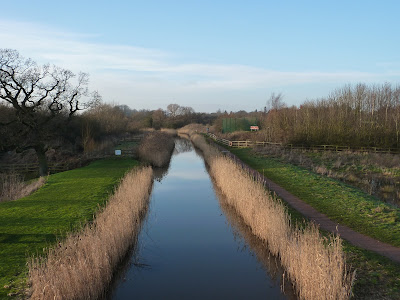 A day trip to Droitwich today for a boat test.  Having driven through spectacular sunshine, I was dismayed to find the whole of Droitwich shrouded in fog.  But it cleared by lunchtime, and in the afternoon there was plenty of winter sunshine.
Posted by Adam at 18:21 No comments:

An update to yesterday's post about the photo of Briar Rose in Towpath Talk.

The photo is credited to Waterways Images, so I emailed Harry Arnold to ask if he knew when it was taken.  He's replied this afternoon, saying it was 28 July 2004.  He's also sent another photo from the same time, which shows BR rather better, and has given permission for it to be posted here. 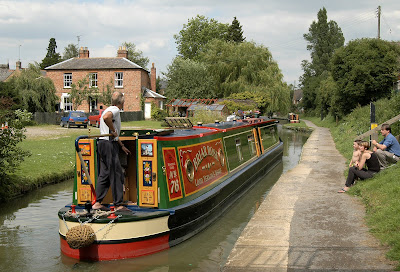 I'm not sure exactly when in 2004 Briar Rose was finished.  On the Braidbar Owners' Group list of boats, it's the first one with a 2004 completion date; the the following one was Sanity, which was the Crick Show boat that year and was finished in April.  That suggests BR was probably completed early in the year, so was probably five or six months old when these photos were taken.

The steerer must be the original owner.  We understand that he died not long afterwards; his wife sold the boat on 1 June 2005; we have the bill of sale from Cowroast Marina.
Posted by Adam at 14:12 1 comment:

I had a text from Stephen and Jayne on Dolce Far Niente earlier, saying there was a photo of Briar Rose in the January issue of Towpath Talk.  I looked up the online edition, and there it was, on page 17, being used to illustrate a promotion for the new Cropredy Marina.

I'd love to know when this picture was taken.  Judging by how shiny the original paintwork was, I think the boat wasn't very old.  It's not the previous owner steering, either.  I suppose it could have been his dad, who used to go boating with him; but it could be the original owner, who had the boat only a year or so.  Either way, it's nice to have a picture from BR's past
Posted by Adam at 15:28 3 comments:

Heyford Fields on test, and Ivy on the cover 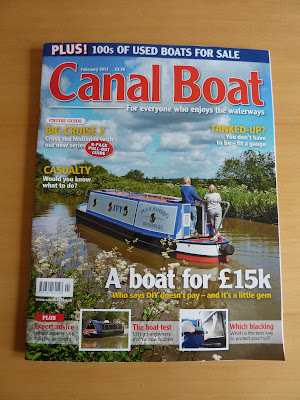 The February edition of Canal Boat is out, and it has one of my photos on the cover.  It's of Ivy, a self-built boat (and that includes the steelwork), which is the subject of a feature inside. 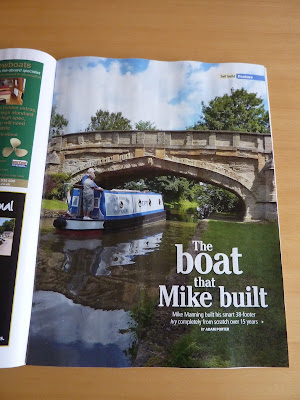 My second piece is a boat test of a 57 footer by Heyford Fields. 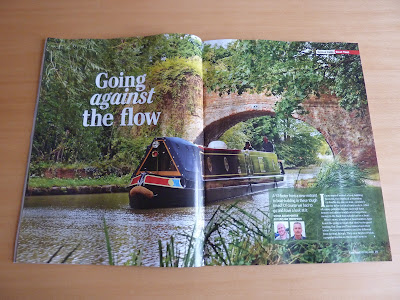