Adrian came up to the boat yesterday, got the fire going and did some shopping.  I was working a night shift, and got the train up this morning.  After breakfast, we set off at 9am, on a chilly but pretty still day.  We saw a couple of kingfishers along the way towards Stoke Bruerne, and one even sat still long enough for a photo. 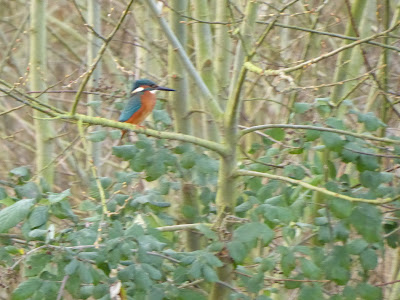 At the bottom of Stoke Bruerne Locks, we turned in the arm and reversed onto the service point.  Topping up the water tank took very little time at all as it appeared it was already pretty full, but we also did a full empty of the loo; as it had been left for three months, everything was well composted down.

We moved to the moorings, tied up, and had lunch.  We then had a phone call we’d been expecting from my cousin Catherine, to say they had just come through the tunnel on Rowington.  We got ready and walked up the flight to help them down.  By the time we got to the second lock from the top they were just arriving there.  Two boats were already going down, but one was stopping, so the other said he’d wait for us at the next lock. 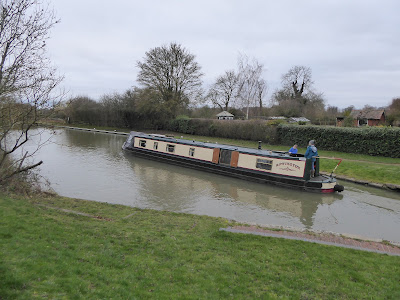 With plenty of crew, we flew down the flight, as each lock could be set ahead.  Our locking partner, an actor called Matt, proved to be great company. 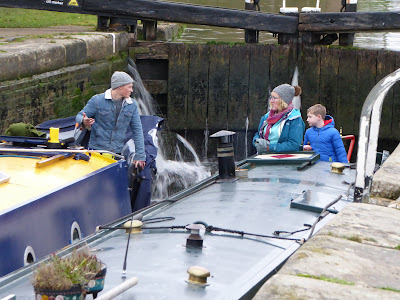 At the penultimate lock there’s a lot of machinery so a stoppage must be coming up.  I must check the list to see what they’re doing.  At the bottom, we’d hoped to moor Rowington as a neighbour to Briar Rose, but other boats had arrived in the meantime, so we’re a boat apart.  We went on board for tea, and will be back later this evening.  Adrian has cooked a main course and Catherine is doing dessert. Having been up all day following a night shift, I’m not sure whether I’ll last until midnight. 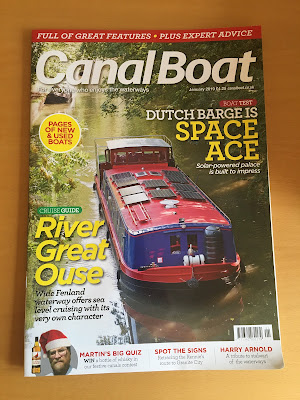 The January edition of Canal Boat is out, and includes my boat test of Sacred, a bit wide beam by Elton Moss.
Posted by Adam at 11:57 No comments: 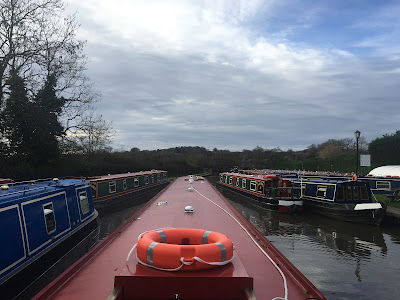 To Alvechurch today for a boat test.  Right by the marina there were lots of moored boats to weave through.
Posted by Adam at 21:20 No comments: