Boats kept coming past all evening yesterday, the latest at well past 9 o'clock.  I heard them drop the engine revs, but the boat still went past with a huge bow wave and a significant wash.

This morning was beautifully sunny.  I set off just before 9, heading for the winding hole at the entrance to Kingfisher Marina. 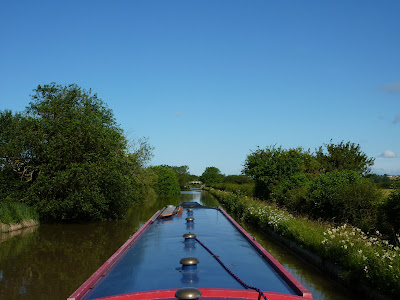 I turned without difficulty and made my way back to Thrupp Wharf.  Yet again there was someone moored in front of the no mooring sign, which adds another dimension to the tricky turn into the marina.  Then I turned the boat to reverse onto our pontoon.  It all went well, which was just as well because our neighbours were watching as they had breakfast in the cratch.  Our other neighbours are out at the moment, so I had a bigger slot than usual to aim at.

At about 10.30, I walked to see a boater I'd arranged to meet for a magazine article.  He agreed to take his boat down to Cosgrove lock and back, so I could get photos.  I was doing my own photos on this occasion, so I took dozens in the hope of getting some good ones.  The sky was blue with white fluffy clouds, so that helped.

I returned to Briar Rose for lunch, and pretty much wrote the article.  It's amazing how easily 1400 words come these days.  Mid-afternoon, I headed for bed for a couple of hours sleep, in preparation for night shifts which start tonight.  I'll be setting off for London in about an hour's time.

During the afternoon, Alan Fincher left an interesting comment on a previous post, about the side shaft in Blisworth Tunnel.  I had a conversation with him about it at Stoke Bruerne last month.  I'm clearly going to have to do a bit more research to get to the bottom of this mystery.

There was, eventually, exceptionally heavy rain last night, but not until gone 10pm.  It was coming down so hard that the mushroom vents were ringing.  This morning it was also raining, but much more gently.  As it was wet, it didn't make much effort to get going very early as it looked as though the rain was here to stay -- as it turned out, although the rain was fairly constant, it was the sort that doesn't really have much effect.  I never felt particularly wet, the day was reasonably warm, and there was very little wind.

Before setting off I made a cup of tea.  At the same time, a cyclist came haring along the towpath, skidded in the mud, and ended up in the hedge right opposite the galley window.  He was OK, just a bit embarrassed.  He quickly got up, brushed himself off, removed the mud wedged in his pedals, and set off again, although rather more slowly.

I finally got under way at around 10.15am, heading for the winding hole at Great Linford where I turned around.  Just as I was completing the turn, a Wyvern hire boat came through the bridge.  Because of the permanent moorings at the Black Horse and at Great Linford, it's a pretty slow section, so the best part of an hour had gone by before I passed my overnight mooring again.  It was then an uneventful run back to Wolverton, where I moored up by the new flats and made a dash to Tesco for some fresh bread.  I had lunch before setting off again.  It turned out that the boat at the other end of the moorings was Summerlea, owned by Douglas Nethercleft, with whom we did out RYA Helmsman's Certificates on Debdale back in 2007.  He said he was off to the Olympics -- I didn't have time to get more details, but as he usually helps out at the IWA National Festival, it may be that he's helping with the Olympic moorings, which the IWA are running.

By now the rain had stopped, and the weather was showing signs of improvement.  I decided to go up the lock at Cosgrove.  There's an enormous amount of water going down the by-wash, which comes out at the far side of the winding hole below the lock.  It means there are some very unexpected currents as you approach the lock.  I had to turn the lock, and as I did so I could see another boat approaching.  I took my time, but even so I was in the lock with the gate closed for quite a while before the boat arrived.  When it was clear they were going up too, I opened the other gate so they could go straight in.  The helmsman seemed to be on his own, but his wife and dog arrived up the towpath a few minutes later.

I continued past the marina, aiming for the mooring near Bridge 62 which I used a couple of weeks ago.  By now the sun had made an unexpected appearance, and conditions were very pleasant.  I moored up in the same spot, in deep undergrowth, but with the stern next to a slight break in the vegetation. 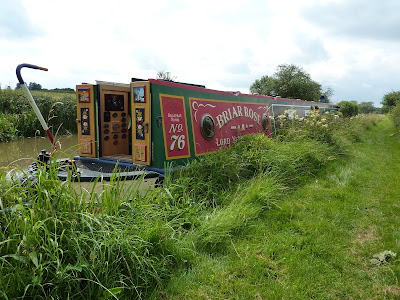 I noticed from the guide book that there was a footpath on the other side of the canal, so I locked up the boat and went for a little walk.  I went back to Bridge 62, where an Alvechurch hire boat with an extraordinary number of people on board went underneath. 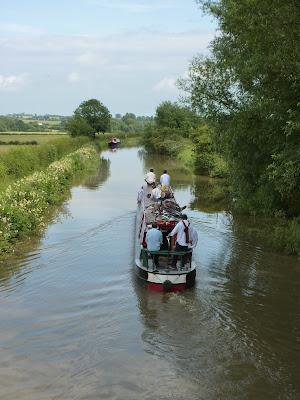 Once over the bridge I turned along a ridiculously muddy path through a small wood.  At one point I thought the mud was going to come right over my boots. 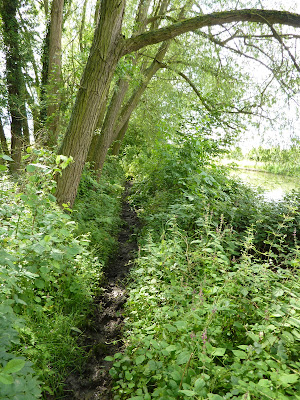 The path soon emerges into a corn field, and I was opposite Briar Rose's mooring. 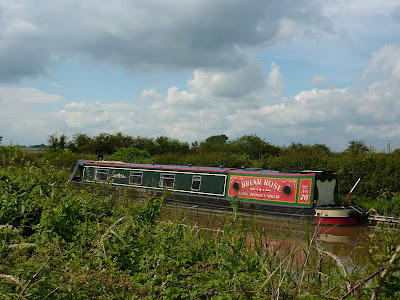 I carried on to Bridge 61, from where there was another nice view of Briar Rose in the distance, and where I could rejoin the towpath. 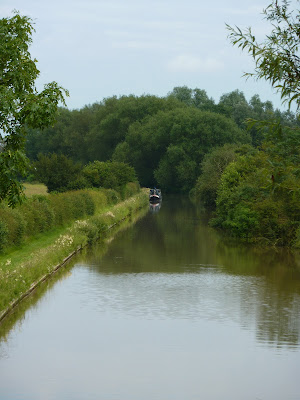 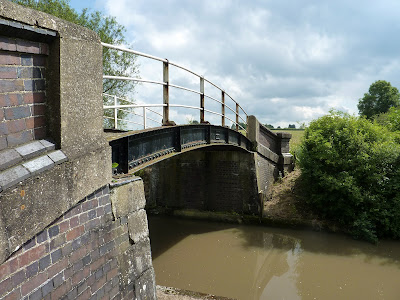 Since then, I've been sitting in the cratch in the sunshine with a cup of tea.  There have been numerous boats past, the majority of which haven't slowed down at all.  Tomorrow morning, I'll turn round and head back to the marina, before my appointment.  The forecast is for sunny intervals, which should make for some nice photos.

I've got a little job arranged for Sunday morning in Northants, and Adrian is visiting his mum this weekend, so I've taken the opportunity for a couple of days out on Briar Rose.  I left home mid morning, and had rather a slow journey to the marina: there was a mattress in the outside lane of M3, and delays at various other places too, as well as a few downpours.  I arrived at 1pm, had a quick lunch, prepared the boat for cruising, and set off at 1.45pm.

The weather was much better than forecast, with plenty of warm sunshine.  There weren't many boats about; just two little boats were on the visitor moorings at Cosgrove, both of them regulars, otherwise it was deserted.  I had to turn Cosgrove Lock, but was soon down and heading for Wolverton Aqueduct. 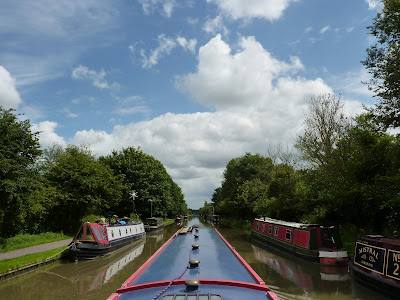 At the aqueduct, I could see a big group of workmen in high-vis suits.  As I went across, I could see that they were taking down an old gantry which crosses the river just downstream from the aqueduct; at the time I passed, it was down in the water, and they seemed to be trying to work out how to get it out.  Its removal will certainly improve views of the aqueduct from that side.

I carried on through Wolverton and New Bradwell, where the fuel boat, Towcester, was alongside a boat.  I moored up just before Bridge 75 in exactly the same place as the last time I was here (which was the night England were knocked out of Euro 2012), except that I'm facing the other way.  Not long after I'd moored, Towcester went past. 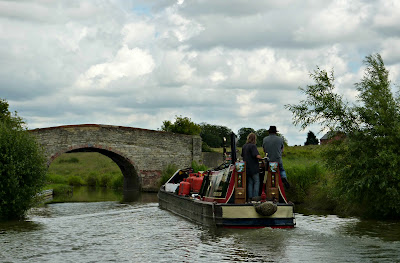 It's lovely at the moment, with blue skies, sunshine, and white fluffy clouds.  There are warnings of torrential showers for this part of the midlands tonight, so it'll be interesting to see whether they arrive. 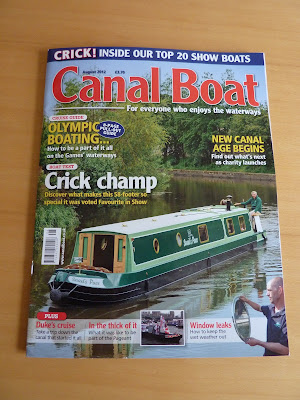 The August edition of Canal Boat is out, and includes my boat test of Snail's Pace, the winner of Favourite Boat at the Crick Show this year. 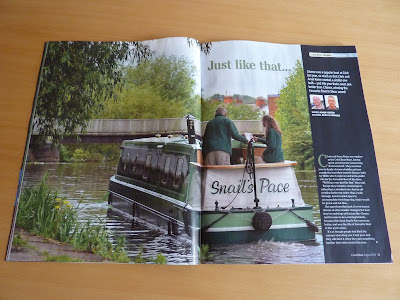 There's also the Crick special feature, with mini-reviews of twenty other boats. 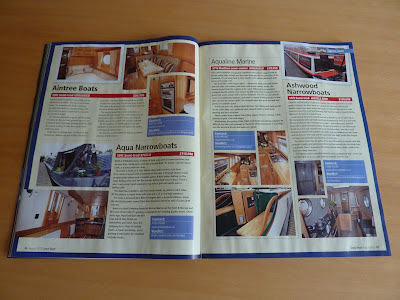