Another clear night and another very frosty morning. 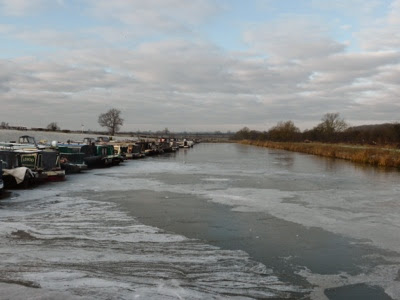 With no prospect of going anywhere, we drove down to Cow Roast, and visited Les and Jaq on Valerie.  It was great to see them again (and for Adrian to meet them for the first time), and especially to see Lee feeling so much better, and stronger every day.  We spent an hour and a half or so there, being plied with tea and excellent cake, and chatting about all sorts of things.  On the way back we stopped at the Grand Junction pub at Bulbourne for lunch.  It's opposite the old waterways workshops, and we got a nice table right by the fire. 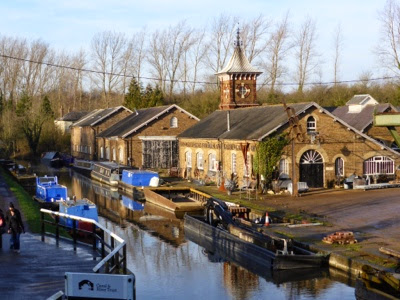 By the time time we got back to the marina it had warmed up a little.  The ice on the canal looked well broken, and someone had either left or entered the marina, as the entrance was similarly broken up.  We decided we'd attempt to spend a night out on the cut.  Getting out of the marina wasn't too bad (although it wasn't as clear as it looked, as there was still ice under the water).   A few yards out of the marina we decided it was madness, so went back in and back to our berth.  At least it checked that the engine still worked.

This evening we've got a nice bit of lamb so we'll have a nice roast dinner, and do our best to stay awake until midnight.  Happy New Year!

We woke to another hard frost, and another very sunny day.  The ice on the marina was still thick -- it was even a job to break it by bashing it with a pole. 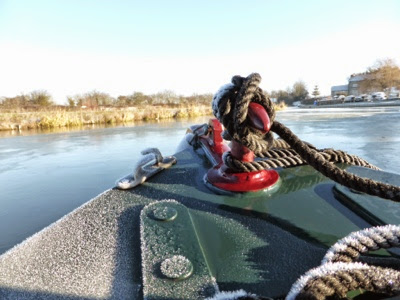 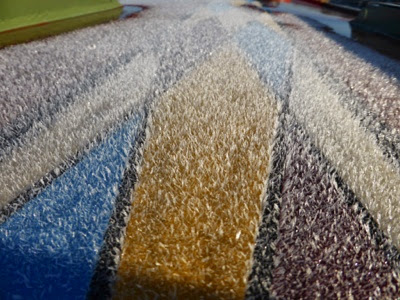 An exchange of texts resulted in a plan for the day.  We went to visit my second cousin, Catherine, husband, Nigel, and kids Grace and Matthew, who often come and help us with locks or for a ride through a tunnel.  After coffee at their house, we all went for lunch at the Admiral Nelson at Braunston. The food took a while to arrive, but when it did it was very good.  There were a few boats moving up and down the locks, even though there was quite a lot of ice. 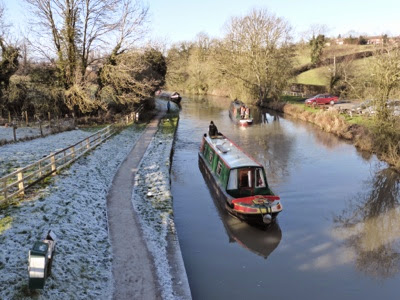 In fact, we've seen a few moving boats.  As we crossed the locks at Stoke Bruerne this morning there was one coming down, and we also spotted one at Watford Locks as we came past.

No idea whether we'll get out tomorrow.  If not, we'll have to come up with another day out.
Posted by Adam at 16:26 3 comments:

It was a very cold night, but the fire stayed in so it wasn't too bad on board.  It takes a while for the fabric of the boat to feel warm, though.  It was a lovely sunny morning, but the marina was frozen; birds were walking about on the ice. 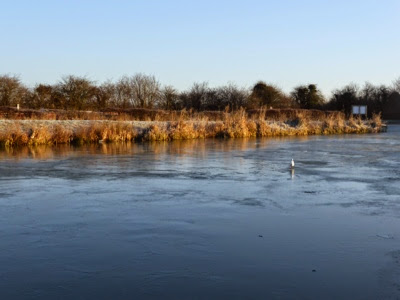 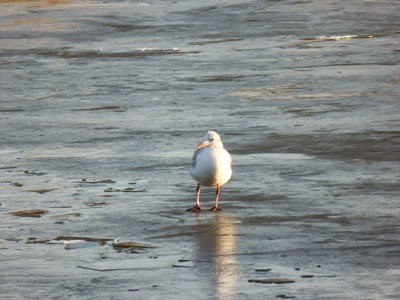 We had breakfast, and as we did so heard a boat breaking the ice on the cut past the marina.  Then I had a text to say my mother was in hospital again.  So at around 10.30 I set off for Kent.  Fortunately the traffic wasn't bad at all, in either direction.

Back at the marina at about 6pm, I noticed that Jubilee seemed to be occupied.  So in the evening an exchange of texts resulted in John and Jan coming round for a drink, and a very welcome catch up -- particularly since we haven't seen them since they came back from their ten week retirement cruise.

It's another cold night tonight with a hard frost.  We'll have a look at the ice tomorrow and decide whether to attempt to get out.
Posted by Adam at 21:22 1 comment:

Adrian came up to the boat during the day, driving up from Weymouth where he'd been seeing family. He got the boat into habitable mode, and got it warmed up, with both the central heating and by lighting the fire.  I came up after work, arriving at about 11.15pm.  It was a very clear, cold night, and the marina was already frozen.
Posted by Adam at 23:59 No comments: