Another late shift today, and another day without running the engine. Adrian arrived back at the boat early evening; I got back much later. Tomorrow, we're off.

Another day at work -- a late shift this time. Beforehand, I made a trip to the nearby Tesco to continue the restocking of the cupboards. Sunny too, so the solar panel has been doing its work; this is the second day we haven't run the engine.

I was up at the crack of dawn (actually, before dawn) and on the 0517 train from Wolverton to London for an early shift. Adrian did some work, and made a trip to Tesco to start the stocking up of the cupboards. He said the canal had been very busy, and a whole load of boats had stopped for shopping trips, and then moved on.

I got back to Wolverton at about 3pm, and a little more than an hour later Adrian headed off to the station to get a train to London, ready for meetings tomorrow. At about 5pm I heard a vintage engine approaching, which turned out to be The fuel boat, Towcester, with its butty, Bideford. I flagged down Richard to get some diesel; these boats take quite a while to stop, so by the time he'd come to a halt, and brought the butty alongside, they were a little way past -- and had a bit of reversing to do to come alongside us. A Wyvern hire boat was waved past. 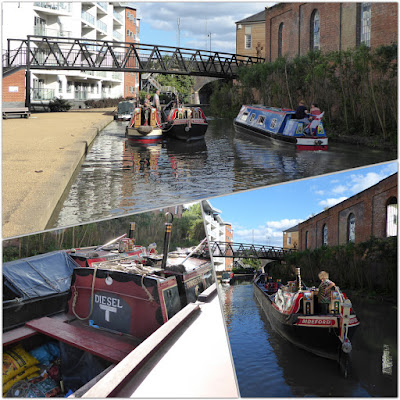 We took on 84 litres of diesel, then Richard slid Towcester out from between Briar Rose and Bideford, and then took the butty on a longish line. Richard said they'd been planning to stop back opposite The Galleon, but the noise of Bank Holiday musical entertainment was too much! It worked in our favour, as we won't have to stop over the next few days to fill up.

We both slept very well, and so had a pretty slow start this morning. After breakfast, we went for a walk down to Willen Lake. One of the main attractions was the water skiing, with people being pulled round by a cable. One girl was very good, and did tricks as she arrived back at the end of the circuit; so,e of the others didn't even manage to stand up before they were flat on their faces and swimming back to try again. We had tea in the cafe, while we continued to watch. 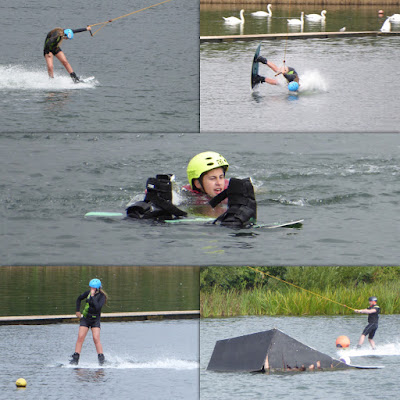 Back at the boat, I checked the batteries, then we had lunch. We set off in decent sunshine at about 1.15pm, heading for the winding hole just through Bridge 82. No sooner had I pushed the bow off than a boat came round the corner, so I tried to keep out the way so they could come past; there were also two boats coming the other way.

Heading north again we kept catching up with people, but managed to get past either because they pulled over, or stopped for one reason or another. Having seen surprisingly few Wyvern hire boats yesterday, we've seen dozens today -- and only one of them in the offside bushes.

We followed a boat across the Grafton Street aqueduct, while a boat held back coming the other way. I'm not sure why, as it's plenty wide enough for two narrowboats to pass. He set off as we passed him, just as the boat behind also started to come across. We heard the helmsman comment that the other boat would have to back up because he wasn't waiting any more -- but in fact they proved that two boats can pass with room to spare. 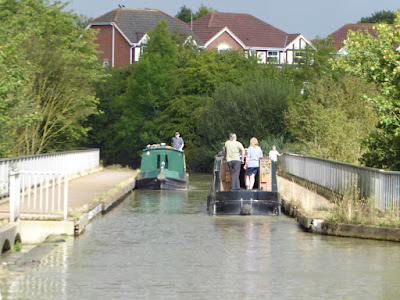 We arrived at Wolverton and moored up in a decent space, complete with a BT Wifi hotspot. There was a big black cloud up ahead, and within a few minutes of getting ourselves secure the heaves opened, with a real deluge. It lasted ten or fifteen minutes, and then the sun came out again. 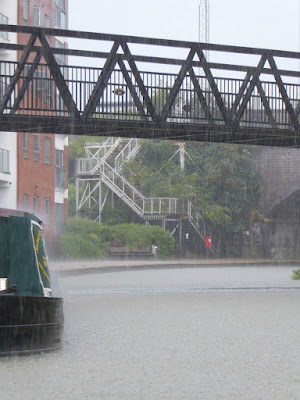 We came up to the boat last night -- having decided that we had a better chance of a decent journey on Friday evening than Saturday morning; we were right, as it took only just over two hours, and I'm sure would have been much longer this morning.

We can't start our big Autumn trip until later next week, but thought we'd spend these few days on board anyway. So this morning, after topping up the water tank, we set off -- in the opposite direction to the way we'll eventually be heading. Only a few minutes after we'd left the marina, there was a torrential downpour -- but it didn't last long; by the time we got to Cosgrove lock it had stopped. The sun shone for most of the journey towards Milton Keynes, where some of the parks seem to have new works of art. I'd don't recall seeing this chap before, and the other one is so new it's still fenced off. 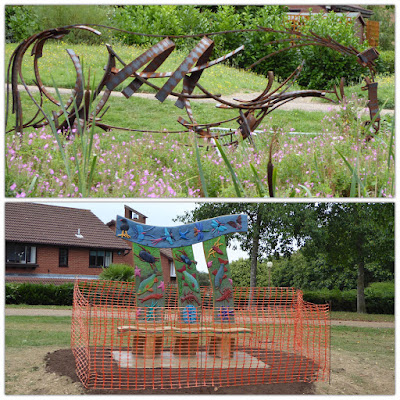 There was another heavy shower just before Campbell Park, but we managed to moor up in the dry, between bridges 81B and 82. There was rain and thunder while we had lunch, and then it brightened up, so we decided to walk up through the park to central Milton Keynes, mostly to use our soon-to-expire vouchers for tea and cake at John Lewis. We made it almost all the way there in the dry -- and the walk back was also dry, although we could see lightening in the distance. We came back via the pyramid beacon, no the cricket ground. 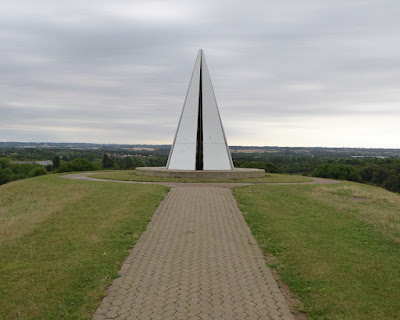 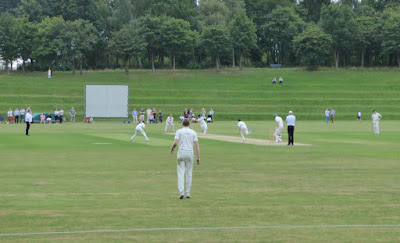 There have been more downpours since we arrived back, as well as more thunder, so I reckon we've done well not to get wetter today. Tomorrow is meant to be better, although we don't have far to go. 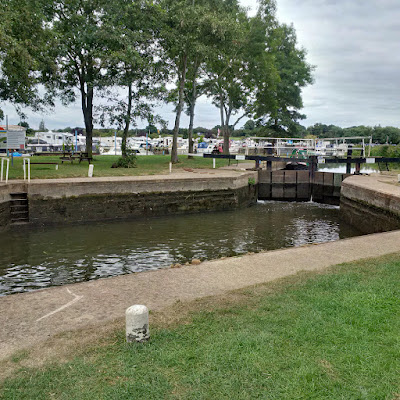 Quite a long drive this morning to Wyre Piddle on the River Avon for a boat test. For the photos we went down the diamond-shaped lock and back up again. It's a lovely area; we came down the Avon on our first big trip on Briar Rose, and came through this lock back in June 2011.

I had a call from a delivery driver at 8.45 this morning, saying he'd be at the marina in about an hour -- and he was. It was a huge lorry, and by 10am there was a fridge on a pallet sitting outside the boat. 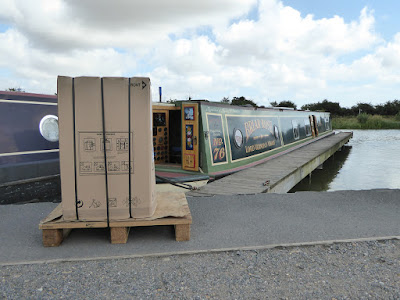 There was commendably little packaging. The cardboard box lifted off, and then there was just a bit of polystyrene. The fridge was sitting on a corrugated plastic base, which meant it was easy to drag along the pontoon to the cratch, and not too difficult to get into the boat. I wired it up and turned it on, and it all seemed to work ok. 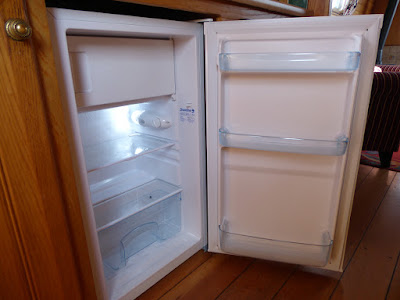 The main advantage is that the fridge is bigger. The old one had a freezer which took about a third of the space -- which suited the previous owner of the boat, but not us. So when we noticed that it wasn't really getting cool, and then that it was running all the time and taking lots of power out of the batteries, it seemed sensible to make a change. The new one has an ice box which will be plenty big enough for us.

I was back home early afternoon, and made a quick call to Shoreline. It was their mistake that the delivery was on its way to the wrong place ever yesterday so I suggested they might like to refund the delivery charge. They agreed without hesitation; they hadn't actively suggested it, but a no quibble refund is the next best thing, so they get a point for that!

Wrong end of the country

I came up to the boat after work last night, as we were due to have a new fridge delivered this morning, between 9 and 12. So at about half eight, I got the old one out of its space, managed to lift it first onto the well deck and then out onto the jetty, along to the end, and into the car. My delight at receiving a call from a delivery driver at just gone 9 turned to dismay when it became clear that he thought he was delivering it to home, rather than boat; there had been an error between billing address and delivery address. The delivery company got on to Shoreline, who apparently admitted their error -- and delivery has been rearranged for tomorrow.

With the day not going to plan, I thought I might as well go to the tip at New Bradwell in Milton Keynes with the old fridge and some used engine oil I'd found when clearing out the engine hole a few weeks ago. I also now needed to get for food for lunch and dinner. While I was at Tesco, I bought a bag of ice cubes to help with an impromptu fridge -- formed of a bucket and a bag. 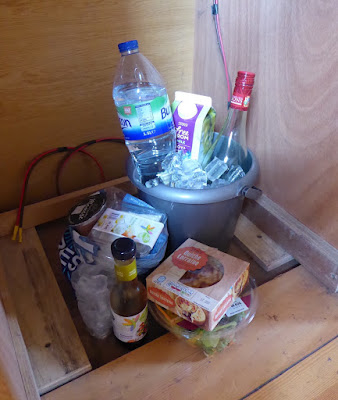 I thought I'd do a maintenance task that was overdue: changing the oil in the gear box. This should really be done every two engine oil changes, but gets a little neglected. James from Chance showed us what to do not long after we got the boat (2011, it turns out) and I think it's been done just once since then. There's not much room round or under the gearbox, so you can't get a big container down there to catch the oil. So I cut holes in the side of two plastic bottles, and put them in position. The oil is released by unscrewing a nut on the bottom; when one bottle was full, I switched it for the other, and mangled not to get too much oil in the bilges. Refilling the gearbox with 1.4 litres took every last drop out of the big oil container, which also answered the question of how much was left in there. As we normally end up doing an engine oil change at some point during our big September trip, I went online and ordered some oil, then after lunch went into Milton Keynes to collect it -- making a second visit to the tip on the way back, the get rid of the old oil, the containers, and all the oily rags etc.

This afternoon I have tried, not entirely successfully, to get some boat test related work done. The good news is that the solar panel has been performing very well, with the batteries up at 100 per cent. I hope the fridge turns up early tomorrow, so I don't have to wait about all day. 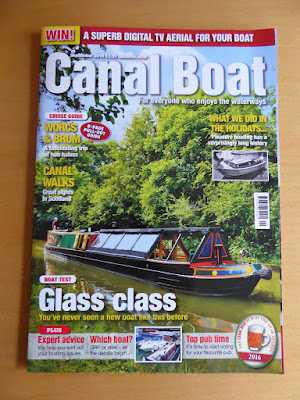 The September issue of Canal Boat is out, and includes my boat test on the runner up at the Crick Boat Show, Betty. It's by Mel Davis and Jim Birch. 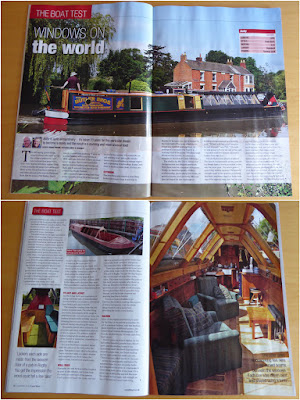