We still had our share in Debdale, and we were in the middle of a two week cruise, going slowly round the Black Country Ring.  On the 27th of November we'd battled ice to get from Fradley Junction to Tixall Wide; on the 28th, we were frozen in; on the 29th, we left the boat there are came home.  Debdale stayed there for another six weeks or so, during the severe cold snap.

This year could hardly be more different -- there's hardly been a frost, let alone snow falls and several inches of ice.  But out love of winter boating remains, so we're hoping to fit in a weekend on board Briar Rose before Christmas.
Posted by Adam at 17:41 3 comments:

With nothing particularly planned for today, I got off to a rather slow start.  The fire had stayed in all night again, so the boat was nice and warm.  I didn't put any more coal on, as I'd like it to be pretty much out by the time I head for home.

Doing two boat tests in two days has meant I haven't had much time to do any jobs on Briar Rose, let alone leave the marina.  Actually, that's not quite true, because on Tuesday evening I hung the framed waterways map over the dinette.  This was the 1985 map we bought for £1 from a second hand bookshop in Tewkesbury when we did the Avon in June. 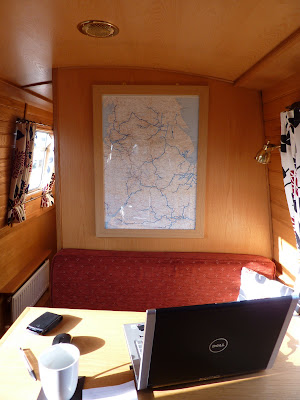 Today's first job was to replace a broken cabin hook which keeps the rear door open when cruising.  In chandlers, these seem to cost more than £10.  I got two at £2.50 each from eBay.  I replaced the one on the other side too so they match, and have kept the old one as a spare. 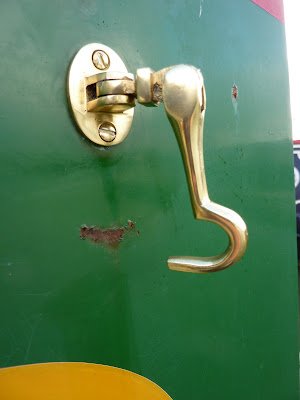 Then I decided to check the levels in the batteries.  Briar Rose has expensive Rolls batteries, so we want to look after them and try to remember to check them every month or so.  Last time Adrian did this job, he enthused about the filler bottle I'd bought -- it's much easier to use that trying to pour top-up water into the hole, and has a valve on it, so puts in as much water as the battery need, before cutting off.  It's just as well it's useful because it cost about £20, which seems a lot for a plastic bottle!  Checking the batteries is quite a time consuming job as each one has six cells.  It's a matter of methodically working through all 24 of them, unscrewing the cab, checking the level, topping up, and screwing the cap back on again.  Then there are six more on the starter battery, but those are trickier as they need a screw driver to undo them.


I realised that time had moved on, and I wouldn't be home by lunchtime, so decided I might as well have lunch here and then head home.  I tried phoning the owners of the two tested boats, neither of whom were available.  I could quite easily spend all day pottering about doing little jobs, and if I hadn't got a meeting to go to this evening, I probably would have done.
Posted by Adam at 11:54 No comments:

I had a relaxed start to the day, with poridge for breakfast, before setting off on the short drive to Calcutt Marina for today's boat test.

It was a misty, murky morning, so we decided to do the interior shots and examination of the boat first, in the hope the weather would improve a bit.  After a couple of hours, the cloud was beginning to break a bit, with one or two small patches of blue sky.  We set off on a short cruise to get running shots of the boat.  The conditions weren't ideal -- but hopefully it'll mean the photos will look atmospheric rather than dull!  We went down to Stockton top lock.  There's not enough room to turn a full length boat above the lock, so we had to go down and turn in the pound below. 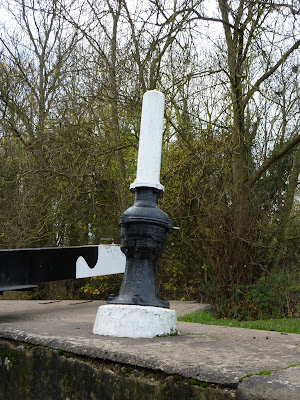 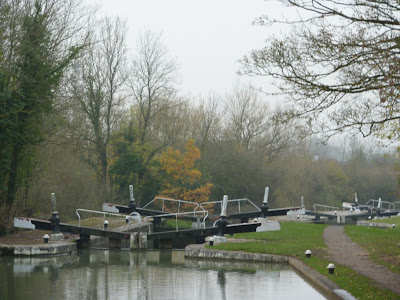 Back at the marina, when it was too late, the sky showed real signs of clearing.  Before leaving I bought a couple of bags of coal, as supplies on Briar Rose were running very low.  David the photographer came back to Brinklow on the way home, to have a quick look at BR.
Posted by Adam at 18:15 1 comment:

Sometimes you have have to sieze the moment, and today was one of those days.

The original plan had been to do two boat tests over two days -- one at Redhill Marina this afternoon and one at Calcutt tomorrow.  However, the weather forecast for today was pretty awful, so yesterday we made the decicion to postpone the test (which was a shame, because we'd already had to call it off a number of times last week); the forecast for tomorrow was good, so I decided to come up to the boat as planned.

So this morning, I finished my third night shift at 8am, had a meeting about pension changes at 9am, and by 10am was on the M1 heading north.  It was surprisingly sunny in London, and indeed all the way north.  I kept wondering when I'd reach the forecast heavy cloud. The fifteen miles of roadworks with a 50mph limit get more tedious each time, even in sunshine.

When I got to Rugby, I stopped as Tesco to get some food for a couple of days.  While I was there, I had a text from the boat builder's wife saying it was a shame we'd postponed today, as it was actually very sunny!  This seemed like too good an opportunity to miss, so once I got to Briar Rose, I started making phone calls.  I knew Andy the photographer wouldn't be able to get up here in time, but his predecessor David lives quite close to Redhill.  Within a few minutes, everything was in place; I made a quick sandwich for lunch, then set off up the M1.  It was still sunny, and we made the most of Redhill Lock (which is open at both ends under current conditions on the River Soar) and the bridge which goes over it, as a backdrop for the photos. 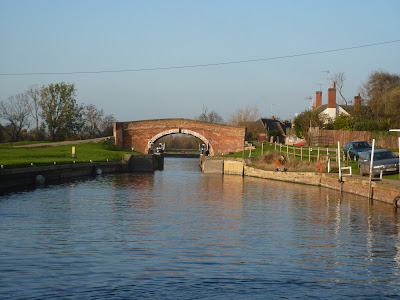 The whole area is dominated by the Ratcliffe-on-Soar power station, now probably best known for the attempted invasion by environmental activists. 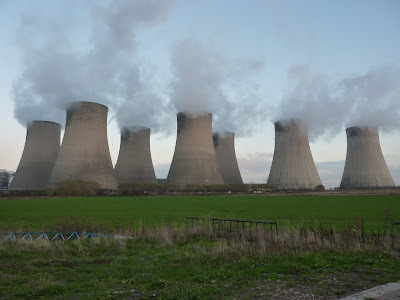 By the time I got back to Brinklow it was almost dark, and was getting quite chilly.  I've got the fire going, and as I've now been up for 26 hours, will soon be off to bed.

Of course tomorrow's forecast has gone from good to bad, so I'm hoping it'll be as wrong as today's was.
Posted by Adam at 19:39 1 comment: 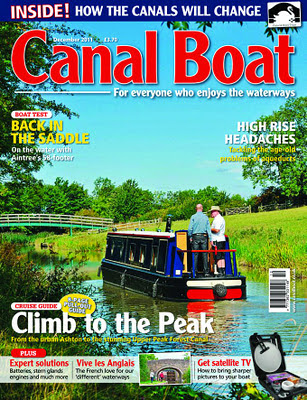 The December issue of Canal Boat is out, and includes my review of a boat by Aintree Boats.  This was the day when I forgot my trademark hat, and the forecast sunny intervals turned into a beautiful day without a cloud in the sky! 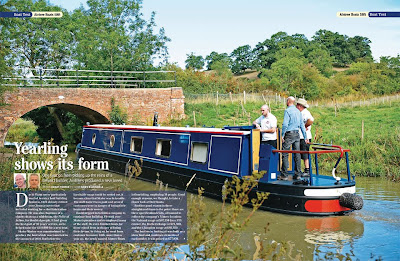