It's my birthday today, and we were due to pick up the boat from being blacked. We had a slow drive up, as for the first part of the journey we went cross country due to an accident a severe delays on the M27. We dropped off one car at our marina, having a quick chat to Hallie as we left, who was also doing a car shuffle. When we got to Heyford Fields, Briar Rose was still in the shed, as they were waiting for the farmer to come with the tractor to put the boat back in the water. It meant we got to see the process, involving a big hydraulic cradle, which lifts the boat in a very gentle way. 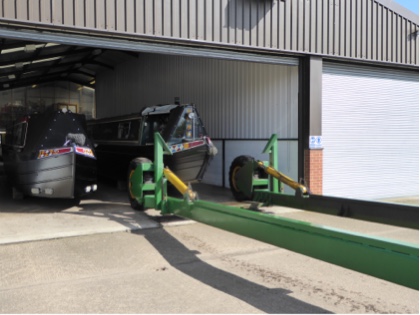 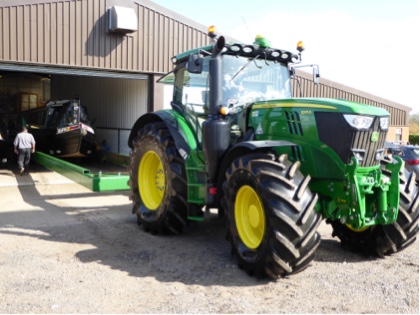 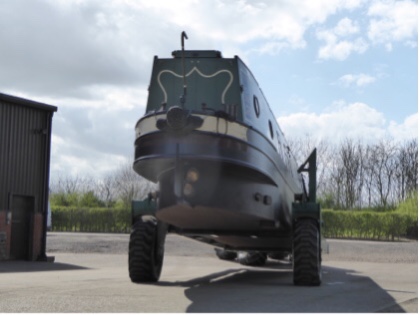 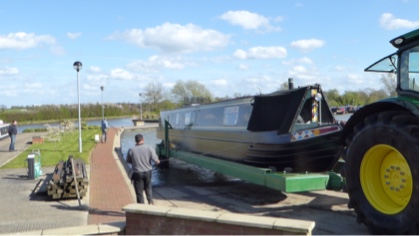 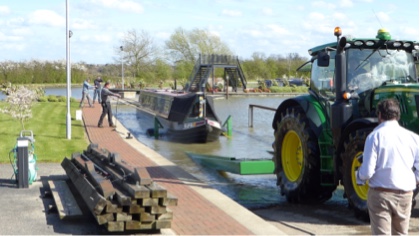 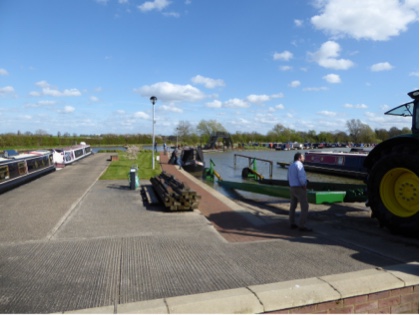 It was very windy, so getting out of the marina was a real challenge. It also made it hard work just keeping in a straight line in places. We've come along to Blisworth and moored up just by Bridge 49. We have a table booked at the Walnut Tree this evening; we're being joined by my second cousin, Catherine -- her husband Nigel was also due to be coming but their Matthew isn't well so he's staying to look after him.

Email ThisBlogThis!Share to TwitterShare to FacebookShare to Pinterest
Labels: Blisworth

The clocks changed to summer time during the night -- but some of us were so tired we put our watches forward at about 9pm, to justify going to bed right away! During the evening, there had been a robin singing his heart out in the hedgerow right next to the side hatch. 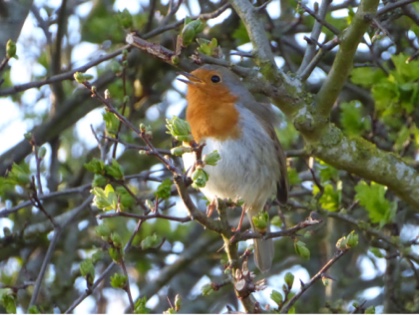 This morning we were up and ready in good time, and set off just before 8.30. It was another fine day with a chilly wind. Brian and Mike got off at a bridge to walk for a bit. 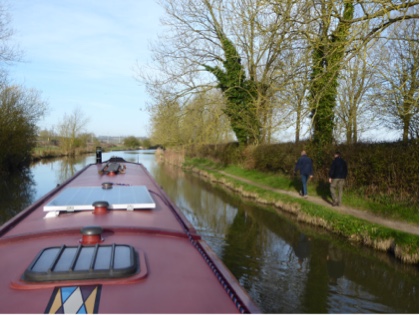 Adrian was packing up as we went along, so by the time we had turned into Heyford Fields Marina and moored at the bottom of the slipway, we were pretty much ready to go. It was just a matter of transferring stuff into the car, and heading off back to our marina to pick up Brian's car. They headed off, and as it was still really early in the day, we called in at Stowe Landscape Garden in Buckingham on the way home. There are 250 acres to walk round, with more follies than you can shake a stick at. 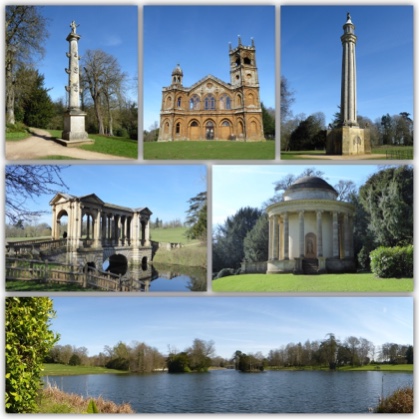 We had an early lunch and then headed home on very quiet sunny Sunday lunchtime roads.

We woke to sunshine but a chilly wind. Having had breakfast, we set off at 9am towards Cosgrove Lock. This is Mike's photo -- in which the sky looks amazing. 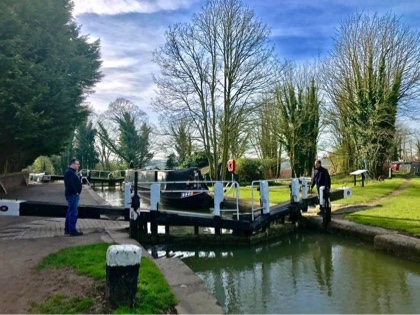 Brian and Mike walked all the way from there to Stoke Bruerne locks, which is a good few miles. Along the way we saw Fields of tiny lambs. 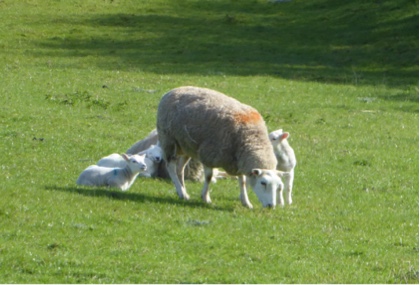 We gave our guests a necessary coffee at the bottom of the locks, and then set off. It soon became clear that we were following a boat up, which turned out to be a widebeam. It also became clear that they were having trouble with low pounds up ahead. The problem seems to have been that the lock by the A508 bridge has new bottom gates, with new paddle gear -- which is very stiff. That means it's easy to not fully wind down the paddles, meaning the pound above is drained. So with up waiting in that lock, and the widebeam in the one above, I ran some water down through the lock from the long pound. 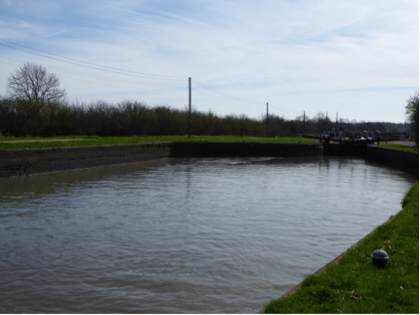 The long pound was also getting quite low, so I phoned Kathryn and asked her if she could run some water down from the Stowe Hill pound. After a bit of a pause, we were on the move again, and we met up with Kathryn below the second lock. Stoke Bruerne was busy in the lovely spring weather. 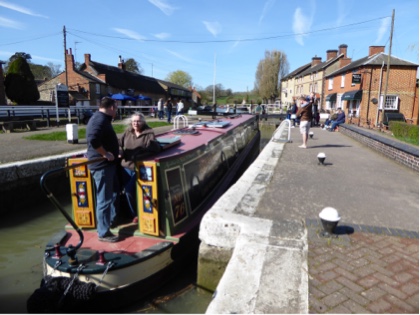 We moored up just beyond Sculptor for lunch, and Kathryn joined us -- so we had a very merry hour or so. We set off again at around 2.30 for the tunnel, which was very cold and wet. We came through Gayton Junction and continued to a spot we haven't moored at before, just short of the new Banbury Lane Bridge. Here the trains aren't quite as noisy. This evening we have a roast going in the oven.
12 miles, 8 locks. (14 miles, 9 locks)

After a slightly complicated process involving meeting up, a course, shopping, and a car shuffle, four of us (we have our friends Brian and Mike with us) were at Briar Rose at about 3.30, and ready to set off. We're heading up to Heyford Fields for blacking -- but actually set off in the wrong direction, towards Cosgrove. It's just that we have plenty of time overall, but not much this afternoon. We went down Cosgrove Lock, went along towards the Galleon where we turned around, and came back to moor just past the aqueduct. Brian and Mike had got off at the lock to have a walk, and Adrian joined them for the last bit and went down below the aqueduct to take a photo of Briar Rose going over. 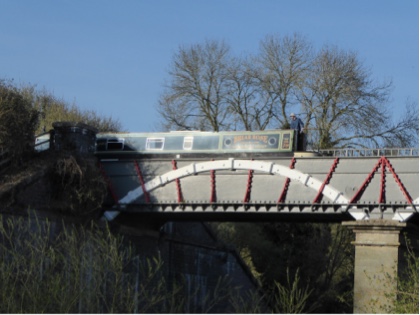 It's been lovely and sunny this afternoon, but with a chilly wind. Tomorrow is also forecast to be nice.

Wine Not Whine on test 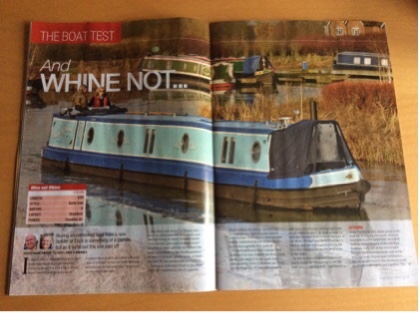 The boat test in the April edition of Canal Boat is Wine Not Whine, built by Smithwood Narrowboats. It was at the Crick Show last year unfinished, but has now been completed for the people who bought it.