Yesterday morning we were at the Premier inn at Walsall, right by the canal basin.  Adrian had stayed there overnight, having been at a conference in Liverpool for a couple of days; I drove up after a night shift.  This is the hotel that has a wall filled with one of my photos of Briar Rose in reception.  Adrian, who was steering, has been airbrushed out (along with a factory), so he stood in front of it instead. 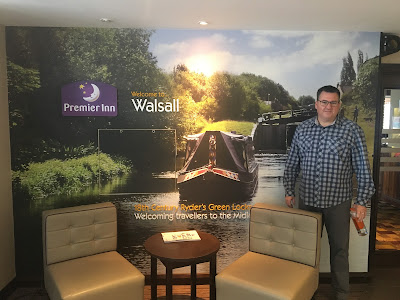 The reason for being in Walsall was that we were going to the 30th anniversary lunch for Andy and Helen from the Jam Butty.  There were people from all parts of their life, and the boaters section also included the Halfies, Bones, and Sandra from the Homebrew Boat.  This photo was posted to Facebook by Sandra. 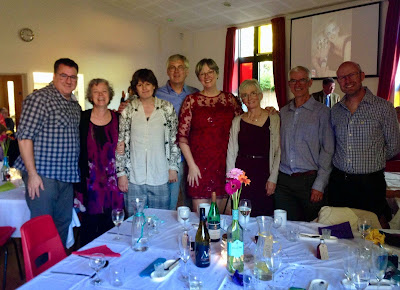 We enjoyed great food and great company, and the tables were full of typical Andy and Helen touches, including little things to take home. 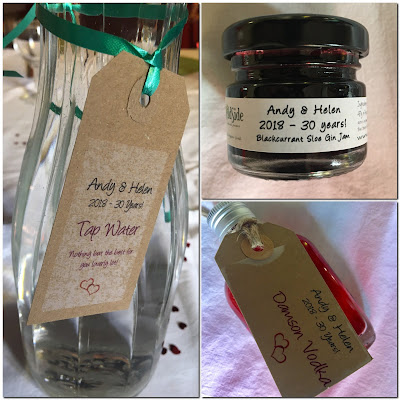 We’d considered staying on the boat overnight but things are so busy at the moment we decided to drive home.  One advantage of this was that we could give Bones a lift back to her boat, and get to know her a bit on the journey.  All in all, a very enjoyable day.
Posted by Adam at 08:25 No comments:

This little ferry across the Thames is one of London’s secrets.  It being a nice, warm, calm, and sunny day, and needing to get to North Greenwich to meet a friend for lunch, I decided to take the ferry rather than the tube.  Down at Trinity Buoy Wharf, you have to phone a mobile number, and the boat comes to pick you up from the pier.  This morning, I could see the boat on my side of the river, it just had to come round the corner to the waiting area. 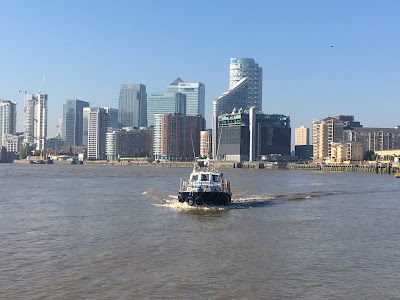 The boat just puts its nose up against the pier, you step on, and you’re off. 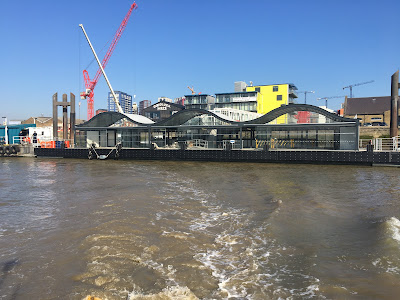 There was a fair amount of traffic on the river today. 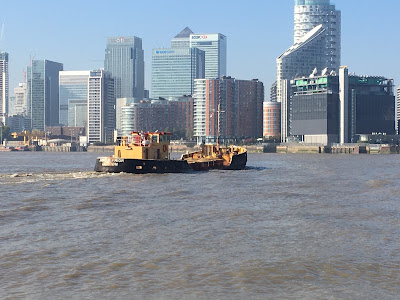 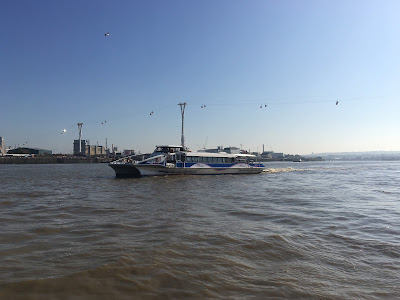 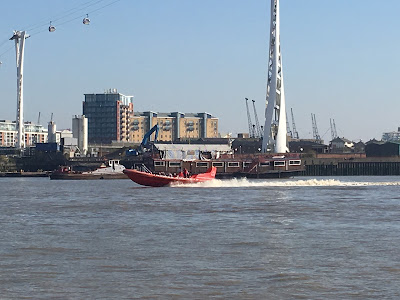 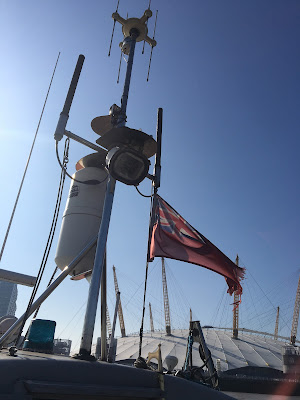 At the pier on the O2 side of the river, the ferry noses in to a specially designed space, you pay your £2 fare, and off you get. 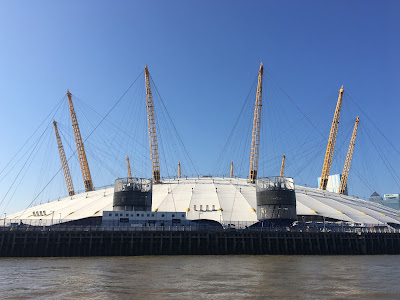 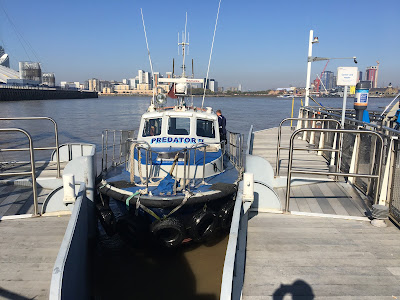 The boat is mainly used for staff for the clippers, so the ferry service is a bit of an extra.  The crossing is just a couple of minutes, and you can sit inside or out on the stern deck.  The service runs from 5am to 7pm, but not between 11 and 11.30.
Posted by Adam at 16:39 2 comments:

Thoughts on the River Nene

We thoroughly enjoyed the Nene, but it was much smaller and much prettier than we’d been expecting.  It came as a bit of a surprise that the only really wide bit is through the Northampton Washlands — but after that it’s much more intimate, with some very bendy sections.  There are some extremely pretty sections.  I particularly liked the reaches other side of Denford Lock, and around Oundle. 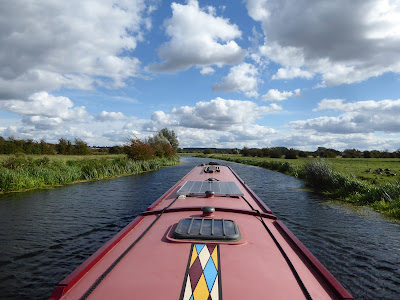 Moorings are a bit few and far between in places, nd you really need to have an idea of where you’re heading for because you can’t just stop anywhere like you can on a canal.  We joined the Friends of the River Nene for £12 to give us access to their moorings, of which we used three, at Hardwater Mill, Ashton Carr, and Peartree Farm.  We also liked the look of some of the others, particularly Ditchford and Stanwick Lakes.  We also paid £5 to moor at Fotheringhay (as must stop, really) £10 at Northampton Marina, and had lunch at the King’s Head at Wadenhoe to pay for our mooring on the pub garden.  We used Environment Agency moorings at Peterborough, Irthlingborough, Wansford Station and Northampton Washlands.  Ferry Meadows was a great place to stop: it’s unusual being in a lake, and even though the Country Park is busy during the day, it’s very quiet at night.  It’s also a great place for visitors because there are things to do.

For planning, I used the new Pearson’s which covers the Nene, because I like the commentary and I can have the book in a map case and it doesn’t really matter if it gets wet.  The Pearson’s also gives lots of information about what’s in the nearby towns and villages.  I also used Paul Balmer’s Waterway Routes maps on my iPad.  They’re great because they show exactly where everything is, and give useful extra bits of information like the depth of locks. 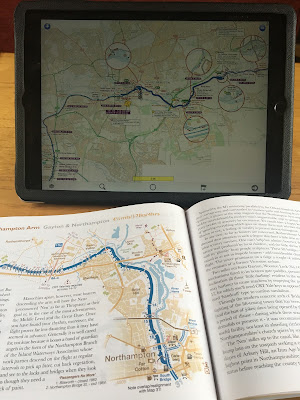 The Nene is blessed with lots of pretty places to stop.  We thought Wadenhoe was lovely, and that Oundle was rather special.  Fotheringhay is well worth an explore, and while Thrapston isn’t in the same league for looks, there are plenty of useful shops there.  Peterborough has lots of shops, and we enjoyed the Cathedral.

Facilities on the river are a bit scarce.  There are enough water points, but Elsans are rare and rubbish points are non-existent.  We ended up sneaking the odd bag into the park bins in Wellingborough and Peterborough.  When you consider that our two week EA licence cost £128, the lack of facilities seems even worse.

The locks make the river fairly hard work, and I can see why many people don’t want to travel it very often.  While most of the locks are automated, the ones that aren’t take a lot of effort — and even the automated ones take a lot of time, because they have to be left with the guillotine gate up.  At the Northampton end of the river the locks come very frequently, too.

All in all, we’d recommend the Nene as a somewhat undiscovered gem.
Posted by Adam at 08:31 4 comments:

Ohm from ‘ome on test 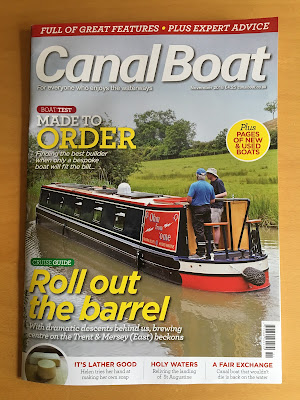 The November edition of Canal Boat is out, and includes my boat test of Ohm from ‘ome by Tristar Boats. 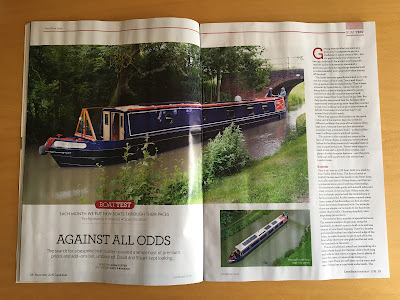 Up fairly early this morning, to pack up ready for home.  With the car packed I headed off to the new marina at Dunchurch Pools for a boat test.  There are great views from the marina, as it appears to be on the top of a hill — but it does mean it’s a bit breezy. 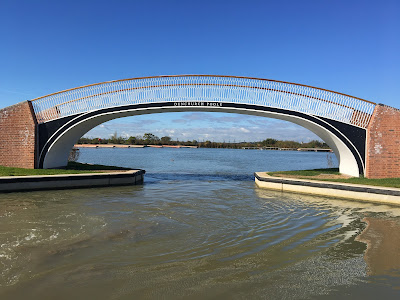 With the boat test done around lunchtime, I headed home.  Later in the week, I’ll post some thoughts on the River Nene.
Posted by Adam at 19:19 No comments: