Adrian went shopping today, to stock up.  We will be setting off soon, honestly!  (These posts are really just so my record of nights spent on board is correct).
Posted by Adam at 23:30 No comments:

Email ThisBlogThis!Share to TwitterShare to FacebookShare to Pinterest
Labels: Calcutt

I have to work all weekend, but Adrian went up to the boat today -- taking much much longer than usual because of all the bank holiday traffic.  While Briar Rose has been at Calcutt, the leaking radiator in the shower room has been changed for a heated towel rail. 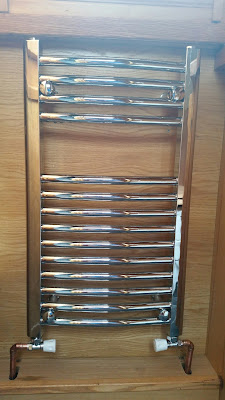 Email ThisBlogThis!Share to TwitterShare to FacebookShare to Pinterest
Labels: Calcutt

A much sunnier morning than forecast greeted us when we woke up. After scrambled eggs on toast for breakfast, we set off a bit before 9am -- us on the boat, and Brian and Mike determined to walk the whole way. We pulled in briefly at the Elsan to empty the 'p-can', and then it was on to Braunston Turn, with Adrian acting as lookout. There was nothing coming, so we turned left. Looking back, there's a great view of Braunston church. 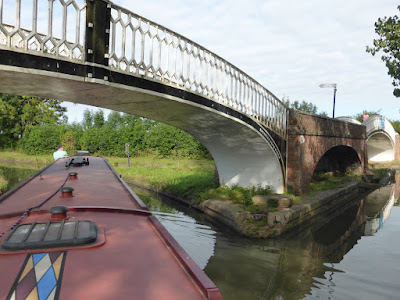 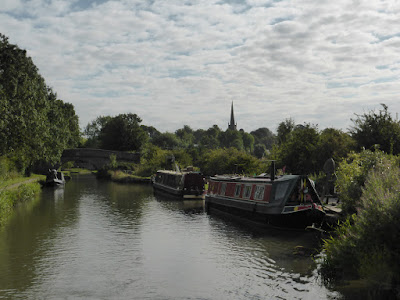 One of my favourite bits of canal trivia concerns this section between Braunston and Wigram's, which is shared between the Graund Union and the Oxford. We were heading north on the GU -- but if we'd been on the Oxford, we'd have been going in the same direction but heading south! Anyway, the countryside is lovely, enhanced by the warm sunshine. 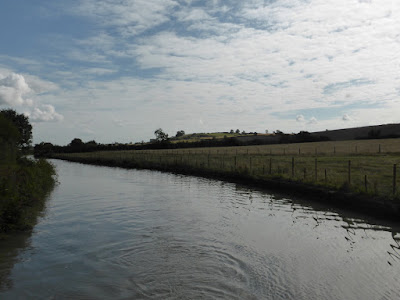 After a couple of hours we reached Wigram's Turn, or Napton Junction, and made the right hand turn onto the GU towards Birmingham. 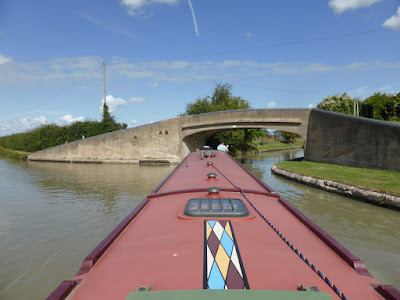 Brian and Mike were waiting for us at Calcutt locks. They'd been there fifteen minutes, so had had time for a coffee from the machine at Calcutt Boats.Two boats had just gone down the top lock, so we and the crew of a Viking Afloat hire boat from Rugby refilled it and then we went down. 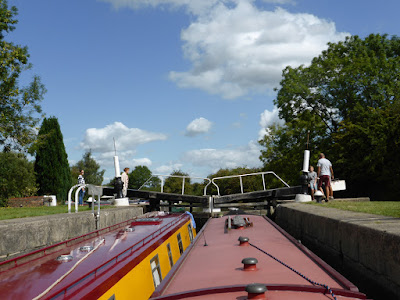 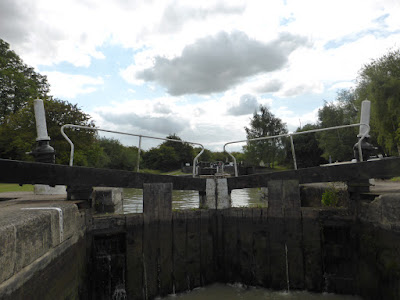 By now the middle lock was empty so we waited for a pair of boats who were coming up the bottom lock. At the bottom of the flight, the Viking boat headed off on the Warwickshire Ring, while we turned into Calcutt Marina. Adrian had already been into the office to find out where we should go -- which was at the back of the original marina. I did a nice turn to come along side the boats already there, when the owners of the outside boat asked if we'd mind swapping with them (so they were still on the outside, and not between two boats) as they are there for another few weeks with engine trouble. So we pulled away again, hovered while the other boat was pulled and poled along a bit, and then we slotted into the space.

Once tied up, it didn't take to long to pack up. Then it was in the car back to our own marina for Brian and Mike to collect their car. We thought about having lunch in the newly refurbished Navigation Inn next to the marina. But it was packed; so we stopped at a garden centre in Buckingham on the way home.

We'll be back at Calcutt in a couple of weeks to start the big autumn cruise.

A much better day weatherwise today -- bright, sunny, and sometimes even warm. We set off at a little after quarter past 8. A little while later, Brian and Mike got off for a walk. They went via the little Tesco's express in Weedon, and caught up with us at Buckby locks. We went up alone, but met boats coming down at every lock. 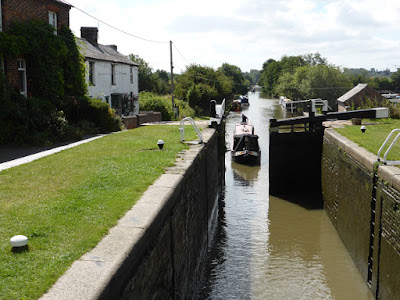 We stopped for lunch just after Norton Junction. Epiphany was moored there, so I went for a chat with Fiona and John; it was good to see them, if only briefly. The stretch from the junction to Braunston Tunnel always takes longer than I expect. The entrance to the tunnel is very overgrown -- which became particularly obvious as a couple of boats came out as we approached. 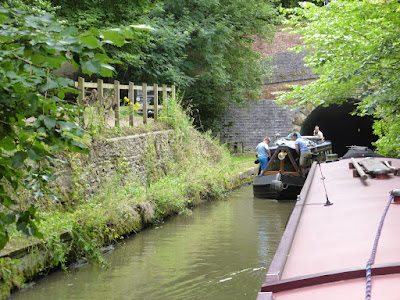 We passed two boats on the tunnel, fortunately neither of them at the very uneven sections. We had to turn the top lock, where a volunteer lock keeper was in attendance. A boat which had gone gone before us waited in the third lock. They turned out to be a very nice couple, and the lady steerer and Adrian did some excellent synchronised boating between locks. 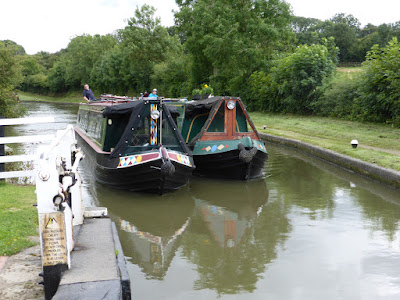 At the Admiral Nelson I chatted to a boater and blog reader who'd been perching on the balance beam; at the bottom lock, I popped into the shop for ice creams, and then walked down to see what the mooring situation was like. We squeezed into a space just past the first marina entrance that was about three inches longer than the boat -- but before we'd even finished tying, the people on the Rose hire boat ahead returned and headed off, so we were able to spread out a little. The fuel boat, Southern Cross, is moored just along, so we bought a gas bottle.

Email ThisBlogThis!Share to TwitterShare to FacebookShare to Pinterest
Labels: Braunston

We came up to the boat last night; Adrian drove up after work, and then met my train at Wolverton at 11.30pm. This morning began with a car shuffle. I drove to our destination for the weekend, and met our friends Brian and Mike there. We drove back to the marina, getting back at a little after 9am.
At around 9.30, our neighbouring boat reversed out of their berth and we followed. It was distinctly murky. 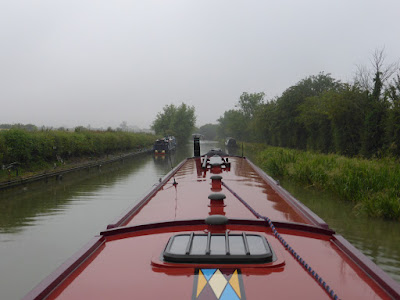 The trip to the bottom of Stoke Bruerne locks took the usual hour and a half. We shared the bottom lock with our neighbour, but a single boat ahead waited for them in the next lock so we were on our own. I feared this would mean a slow ascent, but there were boats coming down (all singly) which helped. Plus, of course, we had crew which meant Adrian could go ahead to the next lock.

At the top, Adrian knocked on Katharine's door and she came out to say hello. We then moored up for a lunch stop. Setting off again, we entered the tunnel to see a number of headlights coming towards us; in total, we passed five boats in the tunnel -- which came as a bit of a shock, as the last several passages have been completely alone. 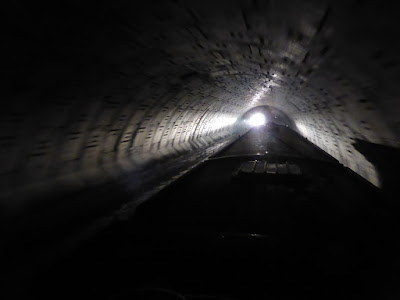 We carried on in drizzle, until Bridge 38, just on the approach to Bugbrooke. We've got the Virgin trains for company, but that's true all along here. There's a massive bridge over the railway line, which Brian and I went to have a look at -- and look down on Briar Rose. 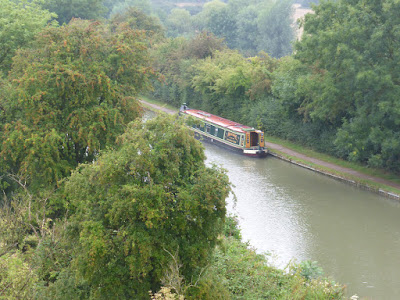 A fairly early start this morning. I drove up through Towcester and met Andy the photographer on the A43 so we could travel together up to Sheffield for a boat test -- the most northerly one so far. The weather wasn't great, but at least it didn't actually rain while we were there, and we made the best of the ten minutes of brightness.

I've never been to Sheffield before, and in truth didn't see much of it this time. But here's the windlass operated swing bridge across the entrance to the basin. 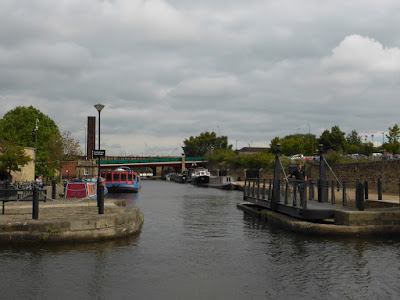 The basin itself is surrounded by rather smart buildings, and there's plenty of room to turn. 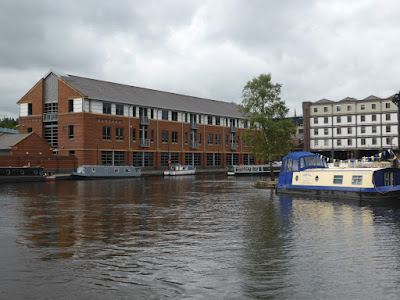 The journey back south was rather slow in places. I've come back to Briar Rose, and will stay the night and go straight to work tomorrow. We'll be back on board later in the week, though, for the preliminary part of our big autumn cruise.

I have a boat test tomorrow much further north, so I came up to Briar Rose this afternoon to break the journey. The drive up wasn't too bad.

It's a while since we've been on board, and walking through the boat was a bit like being on a ghost train such was the number of cobwebs all over the place.

I did a few jobs, including putting some more coir in the loo. The fan has been working well -- everything inside was very dry. The strength of the vent was illustrated by the cover on the vent on the opposite side -- it was covered in dust, so I cleaned it. 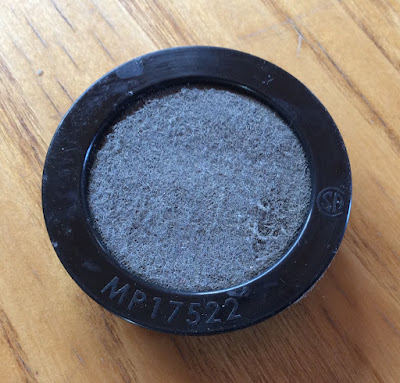 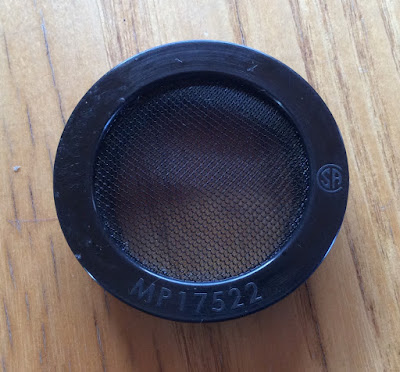 I topped up the batteries, and had to pop out to a garage to get some more top up water.

Tomorrow will be a fairly early start.

We knew Carol and George from Still Rockin' were on the River Wey, the closest connected waterway to home, so we got in touch and arranged a visit for the afternoon. The result was a big boater's barbecue, because Sue and Vic of No Problem were also moored at Send, with family visitors. 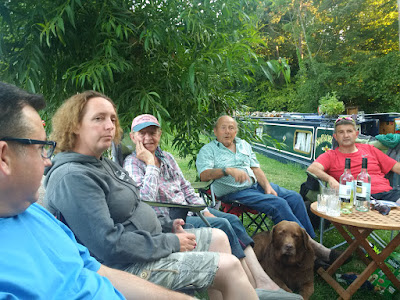 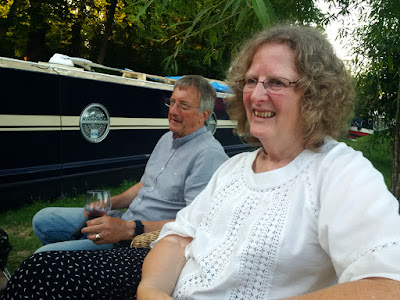 The smallest of the assembled dogs, Molly from Still Rockin' also looked the most relaxed. 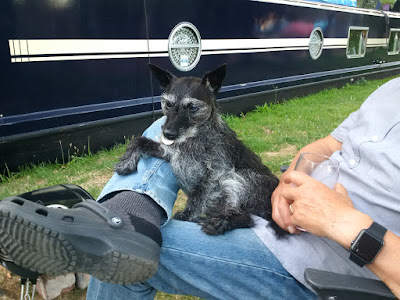 It was a great evening, with good company, and an excellent barbecue by George. 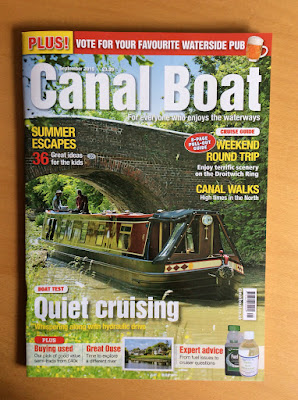 The September issue of Canal Boat is out, and includes my boat test on the Braidbar boat, Integrity. This boat was the runner up at the Crick Boat Show. 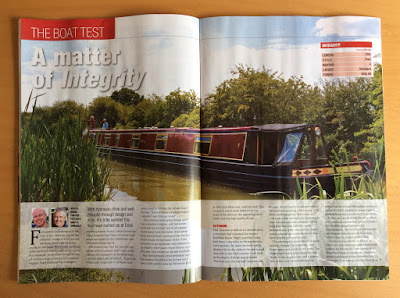