We had a great evening yesterday with Bob and June.  Bob picked us up at the bridge near where we were moored, and took us back to their house, where June had cooked a lovely dinner.  We had plenty to catch up on over the past year, and then we were delivered back to the boat.

This morning we were up early, on a nice sunny day.  We were on the move at 7.40, starting down the remaining 15 Lapworth Locks.  It’s a very pretty flight, one of our favourites. 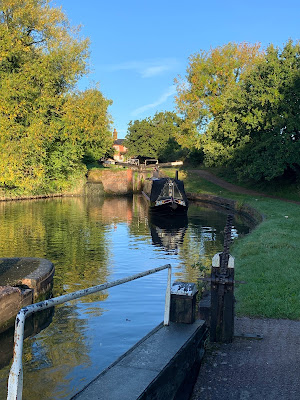 In the thick of the flight we met two boats coming up, but at least they were in pounds where passing each other wasn’t too tricky. 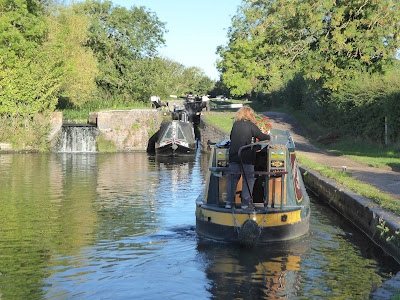 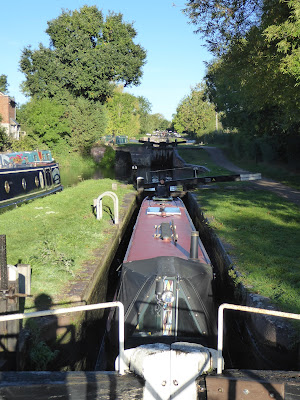 At the bottom, we met a volunteer lock keeper who lives on a boat there, and has a Braidbar on order, so we had a good chat about that.  A boat was coming up the bottom lock, so that was one of the few we didn’t have to turn. 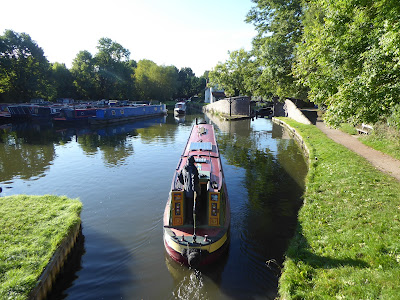 We got to the Lapworth Link in just under two hours, which we thought was pretty good going.  We turned right out of Kingswood Junction, with bright sunshine in our eyes.  The scene as we crossed the Rowington Embankment was glorious.

The sunshine also made some great reflections at the far end of Shrewley Tunnel, which was extremely drippy inside. 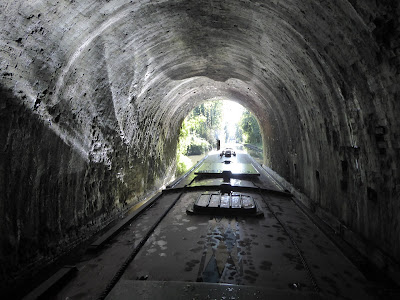 We got to the top of Hatton locks just before 11.30, and Adrian set the top lock.  While the boat was going down, he went to set the second lock, and then a volunteer lock keeper who’d gone to get a coffee from the cafe came up and offered to help.  He started setting ahead, which was great as each lock was ready by the time we got there.  About six locks down we had a few minutes pause, as a boat was on the way up and the lockie with them had set ahead perhaps slightly too many locks.  We made use of the time by having lunch, which Adrian had prepared in the lock-free section, and admiring the view down the hill to Warwick Church. 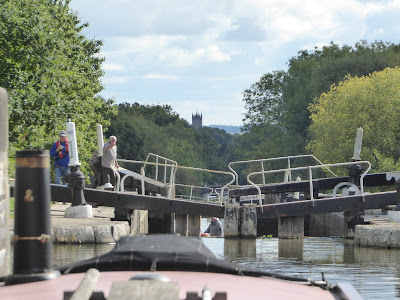 Our lock keep stuck with us all the way down to two locks from the bottom, but because he was setting ahead we hardly saw him.  His help was really useful, though, and he really knew what he was doing.  It also helped that the weather was beautiful. 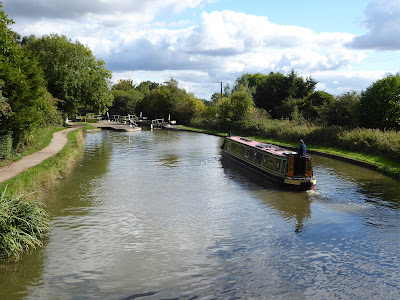 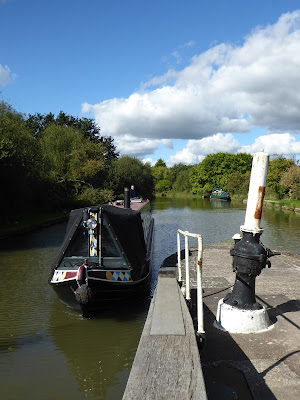 We completed all 21 big locks in two and three-quarter hours, which again was good going.  We moored up along at the Cape, where there was only one other boat; a couple more have arrived since.  Adrian had a call at 4pm, so while he did that I walked up to Sainsbury’s for some shopping, so we don’t need to stop tomorrow.  It’s been a thoroughly enjoyable day’s boating, and with 36 locks in the day we know we’ve done some work!

So pleased that you had a lovely day for you trip down all those locks, just sorry we were not available to help.
It was great to catch up with all your news, exciting times lie ahead.
Looking forward to our next catch up.

Seriously impressed with that day.