Last night’s mooring was particularly quiet — we wondered whether their might be early morning goings on at the farm yard over the hedge, but no.  It was a very murky morning, and our view has disappeared in the mist.  We set off about 8.15 and while the sun made an attempt to break through, it never really managed it. 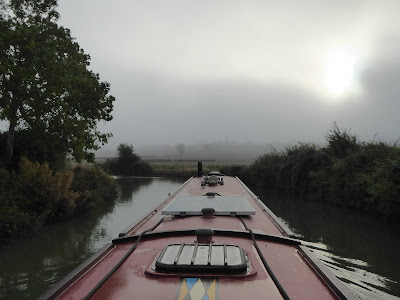 The good thing was that it wasn’t raining, in fact the forecast now said rain from about 2pm.  We were soon at Braunston Turn, and took the right hand bridge towards the locks. 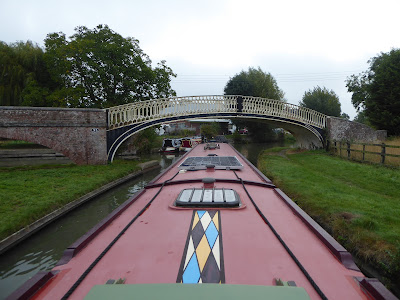 A boat on the water point by the Stop House made frantic efforts to set off as we approached — then waved us past once he’d got to the wide bit by the marina entrance where he wanted to turn around.  Not sure why he didn’t just wait for us to pass before setting off.  At the locks, there was a boat to come down the bottom lock, then we could go up.  The lady lock keeper remembered us from back in June, when we helped a hire boat with Canadians on board.  I went to set the second lock, which was almost empty, and a boat moored in that pound was then ready to go down.  One of the volunteer lock keepers came up the flight with us to lend a hand. The penultimate lock was full with one of the top gates swung open, and I could see a boat going into the top lock so I left it for them.  It was a Clifton Cruisers boat, which the helmsman was complaining was very difficult to steer.  It turned out he’d forgotten to put the tiller arm on!  Before long, we were going up the top lock. 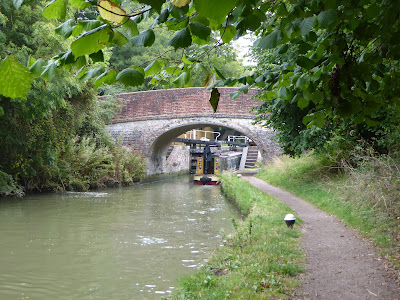 It was only just after 10.30 so we’d made remarkable progress.  We moored above the locks and walked back down to go into the village.  After buying a couple of things at the village store and the butcher, we went into the Community Cafe for tea and cake.  They had a much wider selection of treats on offer today, after a MacMillan coffee morning yesterday.  Anyway, it was a lovely friendly place, with excellent tea and cake. 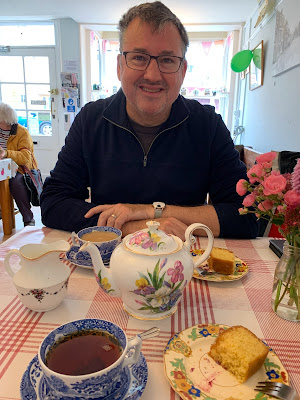 We walked back up to the boat and set off, thinking that if we went now we’d have more chance of beating the rain.  As we approached the tunnel entrance I could see a headlight coming the other way, so held back.  That boat came out and said there was another behind; then there was another, and then a fourth!  One of the privateers at the back said it had been a painfully slow passage, behind two Black Prince hire boats.  We moored just before Norton Junction, a little further back than we’d have liked so we don’t have the view across the valley this time.  We walked to the post box to post a birthday card bought in Braunston, at which point it began to rain.  But we got back before the really heavy stuff.  This afternoon I have refilled the stern greaser, and made an apple crumble (minus blackberries because they all seem to be over already this year).  My cousin Catherine and family are coming this evening, with fish and chips from Norton.

Plenty of blackberries at Bascote! I wrote myself a note on Nicholson's years ago so I'd remember to look.
best wishes
Debby

Yes to be fair we di pass plenty on that whole stretch — but no time to pick them! It’s about the only place we’ve seen decent ones this year.