When I looked at the remainder of our trip on CanalPlanAC last night, it turned out we had 45 miles and 45 locks to go, to get back to base.  Today looked as though it was going to be ok weather wise, while tomorrow looks wet, so we thought we’d get a decent chunk of the journey done today.  We set off at 8.15, straight into the two Cape Locks. 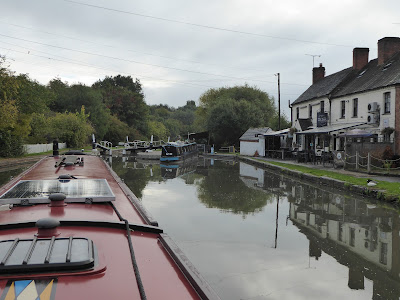 In Warwick, the Kate Boats base, from where we hired twice years ago, looked deserted; they are doing all their hires from Stockton Top this year.  There’s also a lot of building work going on nearby.  In Leamington, the cat mural is still there, and there was a very stiff man steering a moored boat. 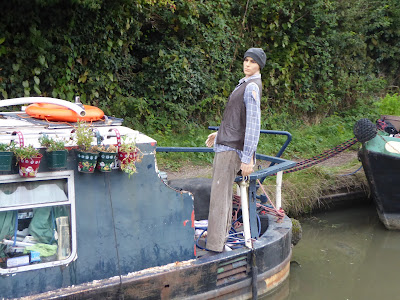 We were following a Napton hire boat, and at RadFord Bottom Lock we went in with them.  The crew turned out to be four American guys who’d been hoping to do the Warwickshire Ring, but had been thwarted by the Curdworth closure.  They did do a mini loop through Birmingham, though, going in via the North Stratford and out via the Grand Union. 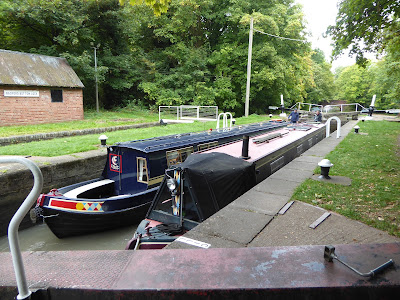 With extra crew on the ground, I was able to walk up to the next lock each time to set it, and we soon caught up with boats in front.  The HS2 works are huge, and there’s now some sort of bridge over the canal, I think carrying some sort of conveyer.  At Welsh Road Lock, one of the uphill boats stopped, and the other was in the lock when we got there.  It had just left and we were about to turn the lock when downhill boats appeared.  One of them turned out to be Bonjour, the new boat of Debby and Dave, formerly of Chuffed.  We’ve been following each other’s blogs for years, so it was great to finally meet. 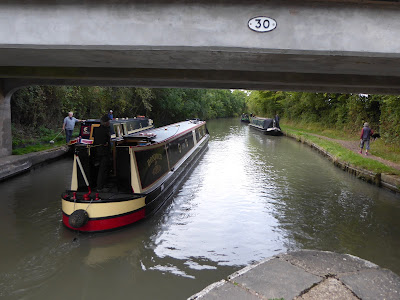 There was very little water at the four Bascote Locks, with the pound below the staircase about two feet down.  The boats just managed to scrape their way across. 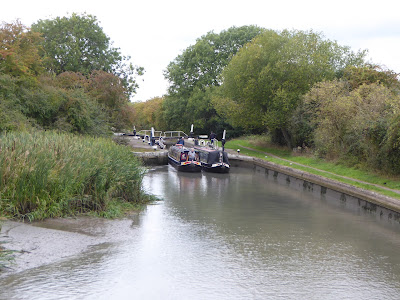 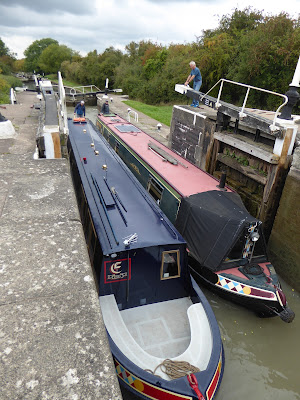 Our locking companions were stopping for a walk into Long Itchington, so we pulled up at Bascote Wharf to top up the water tank, dump rubbish, and check the weedhatch, where I removed a load of plastic from around the prop shaft.  We also had lunch.  Long Itchington had been our first option for stopping, but we’d made such good progress that we carried on to the Stockton flight.  It also helped that the sun had come out.  A boat had just come out of the bottom lock, so that was in our favour, but we had to turn the rest as a boat was going up ahead, although almost out of sight.  It’s a very pretty flight though, and another of our favourites. 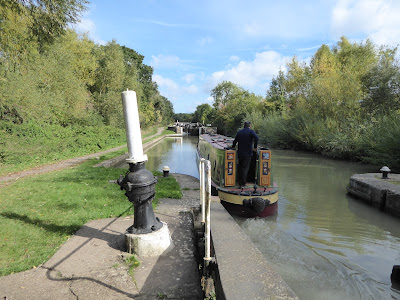 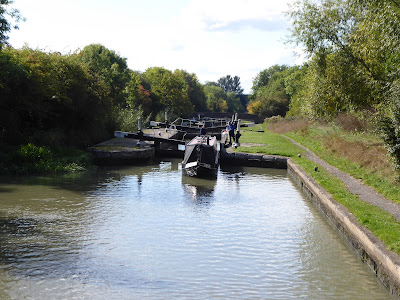 We were at the top at 2.30 so again decided against another possible stopping point, opting instead to go up Calcutt Locks.  As we approached we could see a boat in the distance, which was going up the bottom lock when we got there.  We thought they might wait for us at the middle lock but they didn’t, but it turned out not to matter much as we benefitted from hire boats needing to be back at Stockton Top in the morning.  Two came down the middle lock, and two more at the top one.  We carried on to Napton Junction where we turned left onto the GU/Oxford shared section, and moored up before Bridge 102 in a very quiet spot.  It was almost 5pm, so a very long day for us!  Our new American friends have just been past, calling out to us as they went by.  With a bit of luck they’ll leave a comment here.

Lovely to spend a little time with you both through the locks yesterday and hope to follow more of your adventures in the future.
Keep Smiling
Jim and Ken
Orcas Island WA

Good Morning Gents! Great to have met you both yesterday as we maneuvered the locks. We will be thinking of you as you return to work on Monday. We will be soaking in the Blue Lagoon on Tuesday morning. Hope to cross paths again sometime. Doug and Ernie. eeb0229@gmail.com or dcw22.dw@gmail.com