We were a bit later setting off this morning, probably due to a General Reluctance to end our trip.  It was 8.45 when we left our mooring and headed for the lock. 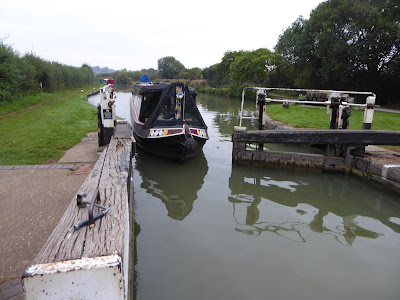 A single hander was going down ahead, so he waited for us at the third lock.  At the next one, the pound was so full of water there was no chance of getting the top gates open, so we had to run some water off to lower the whole pound.  A CRT man turned up and did the same at the bottom lock.  Once we were down we made a brief stop at the services to use the Elsan and top up the water tank — it’s easier to do it here than at the marina.  It had begun to rain at the bottom of the flight, so I put my waterproof trousers on, at which point it promptly stopped.  It stayed pretty much dry for the whole journey back to the marina.  We were tied up on our pontoon by 11.45.  Adrian had been packing as we came along, so after some lunch we’ll be loading up the car and heading home.