The rain was little more than drizzle when we set off this morning a little before 8am.  It took around an hour to get to the bottom of the Atherstone Locks.  I’d been gradually catching up to a boat ahead, so I was pleased when they pulled onto the water point before the locks!  The first couple of locks were empty, which was good, but they takes ages to fill.  A boat then arrived behind us, so as we left the second lock I lifted a paddle to empty it for them.  At Lock 9, a CRT man was prodding about on the cill with a spade with a hugely long handle.  There was still plenty of water coming round the gate, though, which he took photos of.  The pound above was well down, so he ran some water through Lock 8 as we came up in 9; it was still very shallow though. 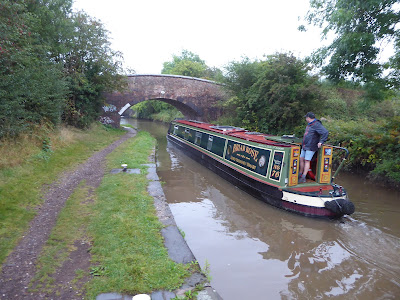 As we rose in Lock 7, I could see than someone was coming down the lock ahead, number 6.  It turned out to be an old working boat going to the Brownhills Festival.  As he came out of the lock I waved so he knew to leave the gates open for us, so we could just swap locks. 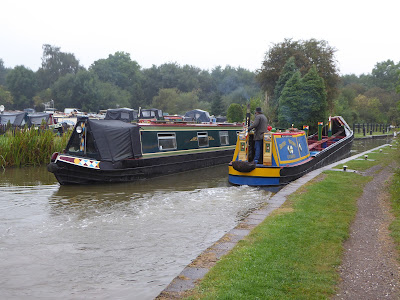 There was another historic boat above the lock waiting to come down, also going to Brownhills, but basically just pleased to be going anywhere.  The locks in the top part of the flight continued to be in our favour, right up to Lock 2 which needed emptying.  By now it was properly raining, and we were getting pretty wet.  I’d put my waterproof trousers on at the start of the day, in the hopes that would ward off the rain — but it hadn’t worked.  As we rose in Lock 2 I walked up to Lock 1 which was also full.  It turned out there were five volunteer lock keepers there, huddled in their hut out of the rain, who hadn’t even noticed us coming.  By the time we were coming into the lock, there was a lockie on each bottom gate and one on each top paddle!

The flight had taken around two hours, which is not bad going.  We carried on, with the rain pretty steady. At least there was no wind though, because vertical rain is much more manageable than the horizontal variety.  Mancetta Marina, which is fairly new, now looks to be full of boats, and has a very impressive canal frontage, with rock gardens and the planted-up front half of an old boat. 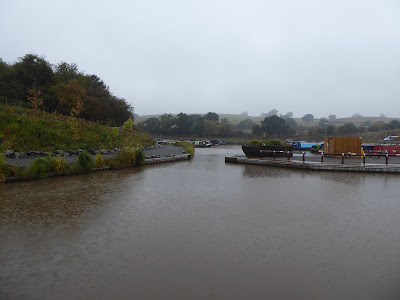 I was surprised by where moored boats had congregated.  We’ve often stopped near Hartshill, one bridge back from the yard, and sometimes struggled to get in there.  Today, there was no-one moored at all, either on the official moorings or the piling before them.  Instead, everyone was a couple of bridges back towards Atherstone.  I was aiming for the bridge just beyond Springwood Haven Marine, which it turns out is now owned by ABC leisure (like Fazeley Mill Marina which we passed yesterday).  We moored up about 12.30; it was a soup-for-lunch type of day.  This afternoon I have written up a boat test I did a few weeks ago, and which I’ve been meaning to start the whole trip.  At least it’s now mostly done.

Email ThisBlogThis!Share to TwitterShare to FacebookShare to Pinterest
Labels: Springwood