Some days everything seems to take a long time, and some days things seem to happen quicker than usual.  Today was one of the latter sort.  We started with a plan, having heard how busy Hillmorton Locks can be, especially since the hours were limited: they open at 8, so we’d aim to be there about then.  So we set off at 7.45, and arrived at the bottom of the locks at about the same time.  One boat we passed was just about to set off, and another was already going into one of the bottom pair of locks.  The other was empty and we could go straight in. 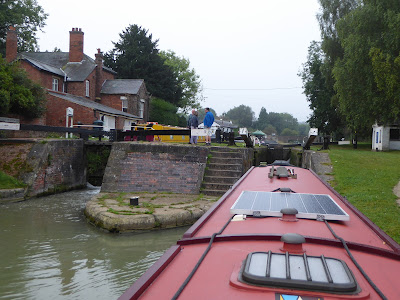 As we rose in the middle locks, boats were coming down, so the top locks were also ready — by when a volunteer lock keeper had arrived. 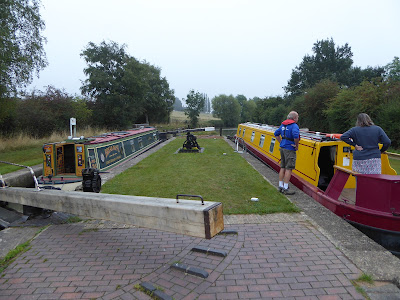 The other boat, an ex-Viking Afloat, stopped at the top for breakfast while we carried on towards Braunston.  It had been quite chilly, but the sun came out and the temperature went up, and before long the spire of Braunston church came into view. 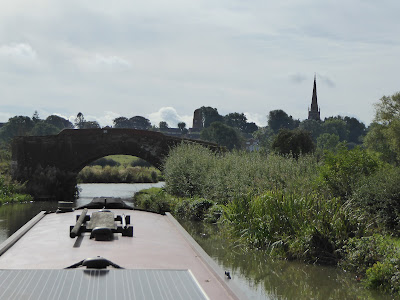 We made two brief stops in Braunston, the first at Midland Chandlers for boat was and polish.  We stopped on their mooring right opposite the junction. 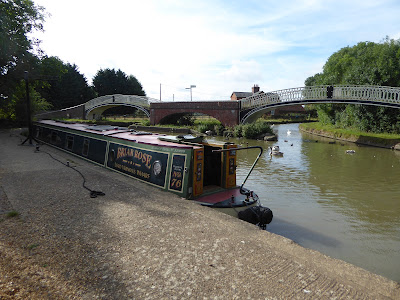 Then we pulled in outside the marina for a quick trip into the village.  We had an early lunch before setting off again.  A boat expecting visitors had tucked in behind us, right by the marina entrance, but was quite a long way out from the edge, so we’re pleased that they could move forward into our space.  Earlier on, I’d sent a message to Mark from the hotel boat, Ellis, as we’d noticed he was in Braunston Marina with alternator problems.  As I walked up to the lock he replied, so came along to say hello. 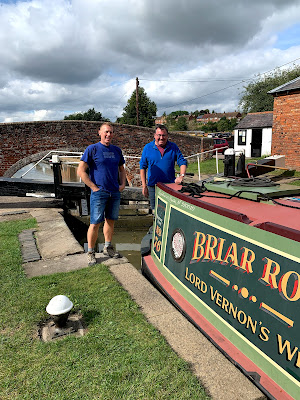 We were joined up the locks by a nice couple on a boat which they moor at Norton Junction, and who have been boating since the 1980s.  We met no-one coming through Braunston Tunnel, and when we got to the junction there were no boat movements either.  A boat had just gone down the lock but the volunteer lock keepers helped set it for us.  This evening, we are going to the New Inn with Peter and Stu from Provincetown, and I was surprised to find Stu already having a pint outside the pub, many hours too early!  We moored immediately below the lock, and washed and polished the towpath side of the boat, something we have neglected to do the whole trip.  I even polished the tiller arm and pin.