I worked a night shift last night, so Adrian dropped me at the station to go to work, and carried on up to the boat.  This morning, by the time my train had got to Wolverton, he’d already done a shop at Tesco.  Back at the boat, we topped up the water and decided to set off; it was raining, but steadily rather than heavily, and the forecast suggested it wouldn’t get any better but would be worse this afternoon.

I was almost certain there would be few other boats on the move in these conditions, but just after I had completed the turn out of the marina towards Stoke Bruerne, a boat came through the bridge behind.  He got closer and closer each time I slowed for moored boats, so I waved him last and he was soon long gone.

In a field just after Kingfisher Marina there were some lapwings.  I noticed them because of their looping flight; on the ground they are quite difficult to spot,  it when you do they are very identifiable because of the curl on the top of their heads.  We passed some kids in canoes and I asked them if they were doing it voluntarily or had been forced.  They’d been forced, for their Duke of Edinburgh Award.  We moored at the bottom of the locks. 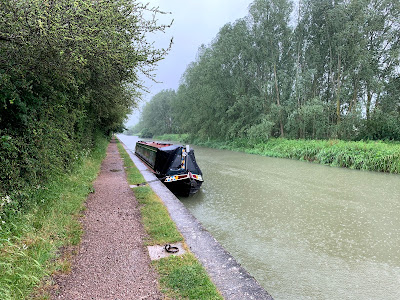 We had an early lunch, then Adrian had a video call to do so I put all my wet weather gear back on and went for a walk, both to keep out of the way and to complete my steps target for the day.  I walked up to the tunnel and back.  On the return, a workboat moored on the offside had come adrift and was across the canal. 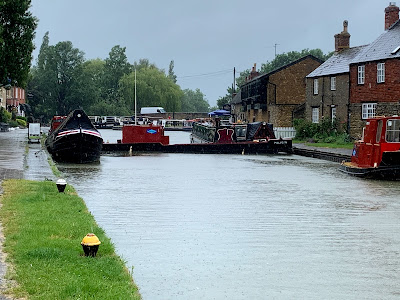 The lady from the house alongside, who I assume is the owner, had been alerted, and a CRT man had arrived to lend a hand.  Back at the boat we’ve been doing not much, while the rain has got heavier and heavier.

We too are out at the moment and passed a number of teenagers who were out walking and I suspect too they were doing their DoE.

Loads of DoE youngsters were walking down the Marsworth flight yesterday (Thursday) as well as a few along the Wendover arm. None today in the rain.