There was a lot of rain yesterday evening, but it was dry by this morning.  We were up early, and set off at 7am, Adrian driving the boat and me working the locks.  The bottom one was empty with a bottom gate open, but we had to turn all the rest as they were full.  A little way up, a man in a hi-vis jacket appeared — it was Mike from the trip boat, Charlie.  He stayed with us all the way up, pushing gates and winding paddles, and it was really nice to have a good chat with him. 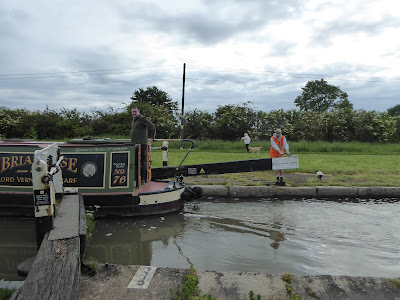 Towards the top, we used the footpath on the offside, as there are some cygnets with very protective parents. 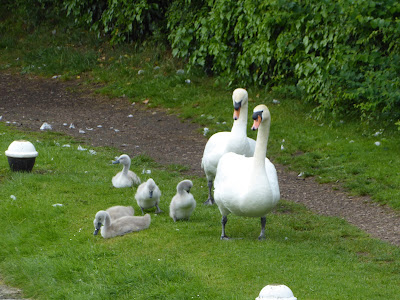 The locks took a little under the usual hour-and-a-half, thanks to Mike’s help and there being no-one else around (until we were joined by a boat for the final two).  Adrian then jumped off to go back to his car, while I took over steering, heading for Buckby locks.  I passed one boat in Blisworth Tunnel, and I thought there tended to be fewer moored boats than in recent times along the whole route.  It soon began to rain and was quite heavy for a time; but later the sun came out, although it still seemed a bit chilly.  The house by Standing Barn Bridge has one hell of a molehill in its lawn. 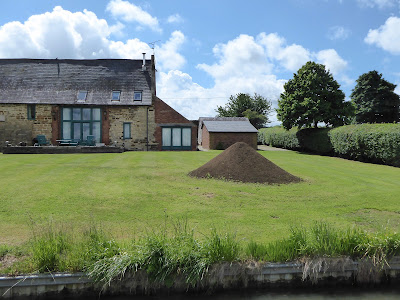 Meanwhile, Adrian drove to Crick and identified where our mooring is for the show, and also helped Sheila on Salodin find her mooring and get secure. After a coffee with Sheila, he drove to Tesco in Daventry for a few store cupboard items we realised we were short of.  He then parked at the CRT car park at Buckby Top lock and walked down the flight to meet me, still a couple of bridges away from the locks.  A bit nearer, some ducks were making good use of the weir arches. 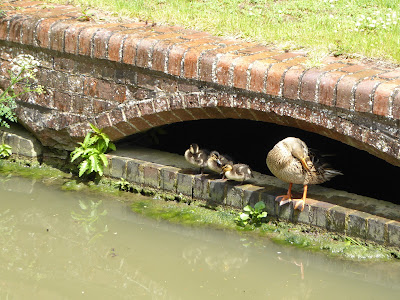 At the locks, the were three boats in front of us in the queue, and more going up ahead.  It had taken exactly the predicted five hours to get there from Stoke Bruerne.  In contrast, people coming down the locks said it had been a very slow passage, some taking four hours.  We waited about half an hour before it was our turn to start going up. 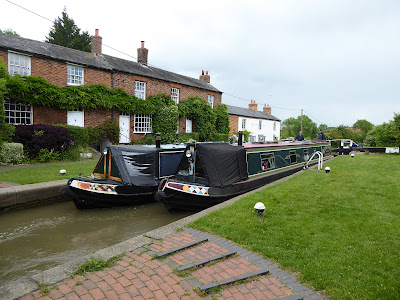 Even with people coming down the flight, we ended up having to wait at every lock — smooth operation not helped by one of them, about three up maybe, which has only one bottom paddle working.  One of the downhill boats had an interesting arrangement at the stern: he was busy telling people that it was cheaper than a canvas pram hood. 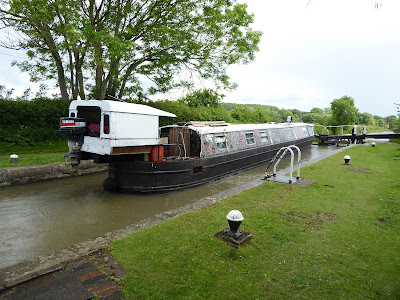 During the afternoon we had rain and sunshine, sometimes both at the same time.  Coats went on and off frequently.  We eventually made it to the top, the whole thing (including the wait at the bottom) taking three hours, so double a normal passage.  Fortunately there was a nice mooring space immediately after the water point, although for some reason there’s no ring for the stern so I have had to bang a pin in.  Also fortunately, the hole pipe reaches from the tap to our tank, so I have been able to top up.  Adrian headed off in the car to London for work tomorrow, while I’ll be turning the corner and heading for Watford Locks.