I drove up to the boat after a night shift, dropped off my things, opened my birthday cards, got changed, and headed out again to Braunston.  My route took me along the new Flore Weedon bypass, which crosses the canal on a big new bridge that we’ve watched go up over the past couple of years.  I parked in the village and walked down to the locks.  I was meeting James and Amy from Willow who are heading to London with new Baby A.  We were pretty mob handed, as also helping out were Maffi from Milly M and Ann and Simon from Melaleuca.  We started off up the locks with one boat, but they soon decided to moor and were replaced by Water Jester who’d just set off.  We flew up the locks, and at the top we all went on board for tea (and to admire Baby A, who was very contented and cute). 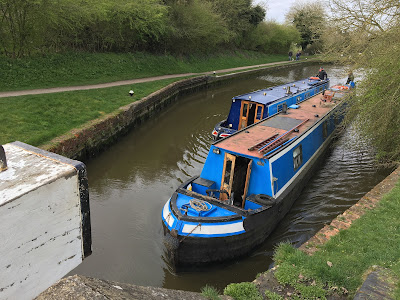 We all agreed to go and help at Buckby too, so while Amy and James set off through the tunnel, the others drove to the top of Buckby Locks while I drove to the bottom.  I was starving so popped onto the marina cafe for a baguette to eat while walking up the locks.  As I got to the top lock Willow was just coming down.  With plenty of crew, we made rapid progress down the locks; the sun had also come out and it had warmed up considerably. 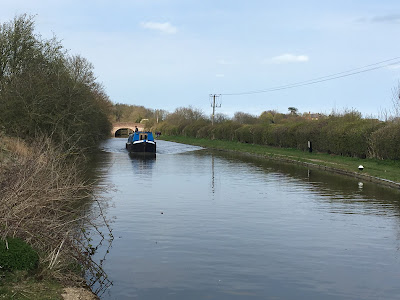 At the bottom, James and Amy set off to make some progress towards London.  Ann, Simon, and Maffi turned down the offer of a lift back to their car, so I headed off back to Briar Rose, via Tesco and Towcester for some food.  It was too nice an afternoon not to move, so I quickly prepared the boat and headed down to Cosgrove.  I turned around above the lock and moored in a nice open spot just by the horse tunnel under the canal.

I’ve lit the fire and will be having an early dinner and an early night — partly because I’ll soon have been up for 24 hours, and partly because of an early start tomorrow when we hope to get two boat tests done.

In true boater's community gashion, folks turn out to help each other along the way just as you and others did for me and Les. There is no other community quite like it. Brilliant!!!

What lovely Boaters you all are to help where it was needed.