It rained overnight although neither of us heard it, and it was pretty drizzly this morning.  We set off around 8.15 and went along to the junction where we turned left. 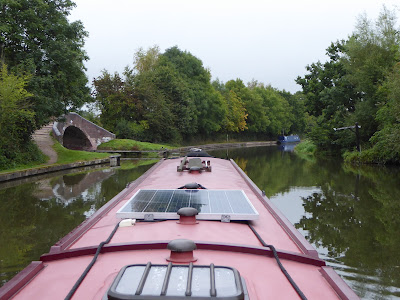 We went through the narrow channel into the basin and settled on the water point.  The whole junction area is very attractive, with the typical Stratford Canal barrel-roof cottages and split bridges.  While the tank filled we started the washing machine, and I popped up to the main road to a post box.  It was just after 9 when we were ready to go into the first lock, which was right in front of us. 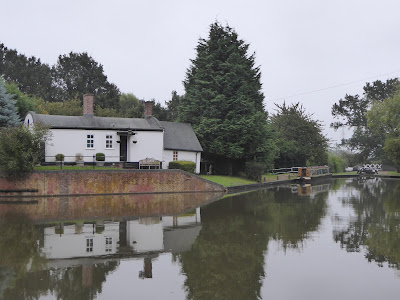 The locks come in fairly quick succession, but not quick enough that you can really go and set ahead. However, one did look close enough so I went and lifted a paddle — only to find when we arrived with the boat that an American lady was emptying the lock, with the top paddle still up.  At one lock, a large Muscovy Duck was on the offside, strutting around as if he owned the place.  To be fair, he probably does. 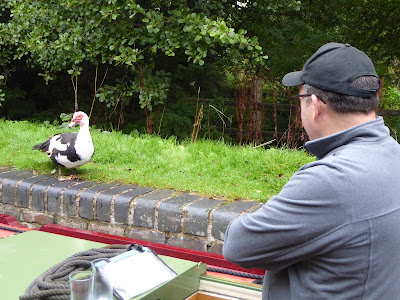 We started meeting more boats at Lowsonford.  One was just leaving the lock which has the Landmark Trust cottage next to it, so I could open the gate straight away.  This lock temporarily had an Anthony Gormley statue on the lockside. 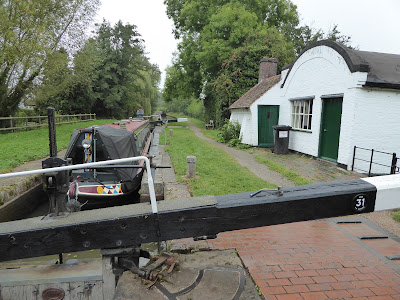 The next lock just needed topping up, but as I was opening the top gate I could hear the clicking of a paddle from the other end.  I called out to the lady, who claimed she thought I was fishing!  A couple of locks further on is the one which has the tiny Yarningale Aqueduct immediately before it. 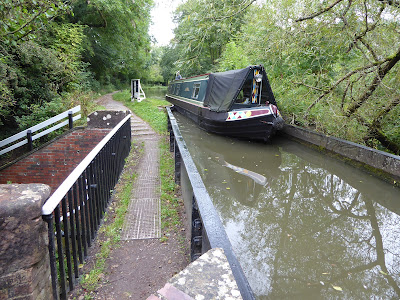 At the last couple of locks, a cheery team of CRT volunteers were cutting grass and generally tidying up.  By the time we had completed the 17 locks down from the junction it was definitely lunchtime.  I had walked the whole way, a good 4 miles.

We carried on for a couple of miles and moored on the visitor moorings at Wooton Wawen.  Monday start boats from the Anglo Welsh hire base opposite have been leaving with their new crews on board.  Adrian had a call at 3, then we went for a walk around the village.  The farm shop (and indeed the whole of the Yew Tree Farm shopping courtyard) was shut — just as it was when we stopped her on Debdale eleven years ago.

That duck was there when we went down in early July