I went to bed early last night and slept well.  I was up at a reasonable time and set off at 8am.  It was pretty murky and chilly.  It was really just a matter of getting the miles ticking by, to cover the ground.  By the time I got beyond Weedon the sun had come out. 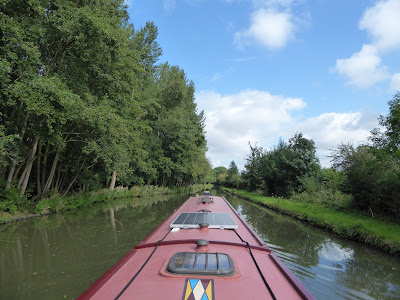 When I got to the bottom of Buckby locks, there appeared to be a boat in the bottom lock, and one below waiting.  As I had a boat behind me, I pulled alongside the waiting boat.  The people on board, a very nice couple who moor at Stowe Hill and work part time at Rugby Boats, said they’d been waiting 45 minutes.  Two boats had gone up in front of them, but they were refusing to turn the next lock, in the name of water saving; they were waiting for boats coming down.  Unfortunately, there weren’t any boats coming down.  When the boater in question came and explained to me what he was doing, I had to correct his belief that the locks were under restrictions because of water shortages.  In fact, the restrictions were lifted several weeks ago.  Meanwhile, water was cascading over the bottom gates of both the bottom two locks.  Finally, a couple of boats arrived coming down, and the boater deigned to at last leave the bottom lock.  As I was single handed, we agreed to tie our two boats together to go up the locks.  I was designated as steerer.  By the time we were in the bottom lock, there were five more boats waiting behind us. 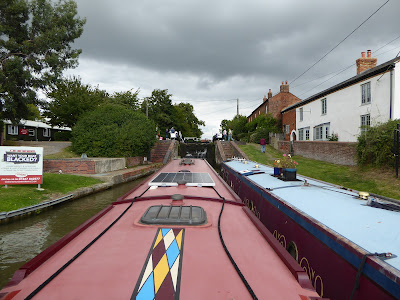 The system worked well.  Someone would go up to the next lock to start it emptying, I would open the top gate my side, and as we had boats following, one of their crew arrived each time to help close up.  We met a few boats coming down too.

Steering a breasted up pair isn’t easy.  The unpowered boat keeps going where it’s going much longer than the powered one, so small adjustments in steering are virtually impossible.  Coming to a halt in the lock is also more tricky.  I found that when I brought Briar Rose to a halt, the other boat kept going.  Getting through the bridges further up the flight was also tricky, with the boats coming almost to a halt because of the depth (or lack of it) at the edges.  A towpath walker was very impressed at seeing two boats with only one steerer, and wondered how I stopped the other one going off in a different direction.  I considered telling her it was pure power of thought, but actually explained that the boat’s were tied together!

The flight took dead on two hours, so it was 2pm when we left the top lock.  I pulled over to the water point to fill the tank, start a load of washing (mostly stuff I’d brought from home), dump the rubbish, and have some lunch.  When the tank was full, I continued to Norton Junction and turned left for Braunston.  It seems a long time since we came this way, although it’s in fact only two years.

I went through the tunnel, passing one boat coming the other way, fortunately not at the kinky section, and moored above the top lock, at the lock end of the moorings so I’m in prime position tomorrow morning.  A couple of boats have come along and gone down, but I decided not to join either of them.  I don’t need to timewise, I was already moored up, and would there really be a mooring in Braunston at 5.30?

The mobile signal here is weak to say the least.  I had enough to call my father to say Happy Birthday, but I have given up trying to upload photos.  I will add them tomorrow.