After publishing the blog yesterday, I walked up the lane from the moorings and had a look at Great Comberton — a village with several thatched houses, and a book swap in an old telephone kiosk.  I also picked a good quantity on blackberries, far more than we managed at the moorings in Wilmcote. Later on there was some excitement when a couple arrived waiting for members of their family whose boat had broken down.  Sure enough, after a while a cabin cruiser arrived, being rowed with oars.  I think if I bought a boat and there were oars supplied I’d be worried.  In the gathering gloom and with bats flitting around our heads, we moved along a post and so did the other narrow boat, so the stricken cabin cruiser had space to moor.

The Comberton Quay moorings were incredibly quiet, with the old sound being an owl.  This morning was another bright sunny morning (although apparently it’ll be the last).  We started a wash load as it might be the last decent drying day we get, then set off around 9.  Nafford Lock was first, with a swing bright over it, and the wreck of a narrowboat on the weir.  A little boat was just coming out. 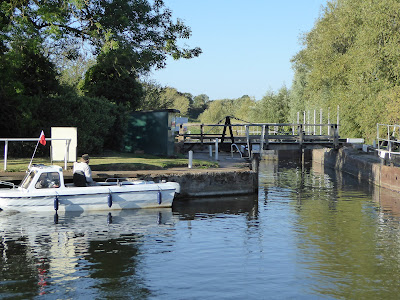 There are some very sharp bends, the sharpest being Swan’s Neck, where you completely double back on yourself.

We successfully negotiated Eckington Bridge, with its very worn stone. 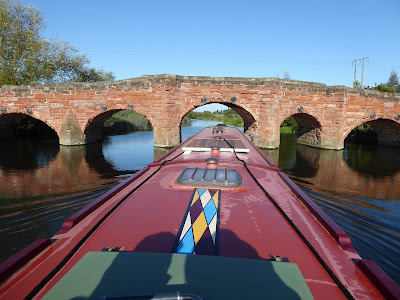 At Strensham Lock, a little Sea Otter boat that we’ve seen several times was on the lock landing, and someone appeared to be coming up, so we had to linger mid-stream.  It took an absolute age for a big Sheffield Keel to come up the lock; even after the gates were open, it took an inordinate amount of time for everyone to get on and get moving.  Below the lock, there’s lots of sailing and canoeing, and eventually you pass under the M5.  King John’s Bridge in Tewkesbury is next, then we moored on the water point just before the lock. 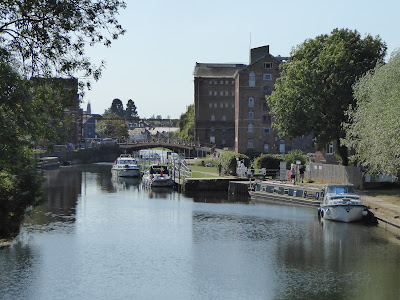 This turned out to be an incredibly slow tap; it must have taken over an hour to fill the tank, and we don’t think it was particularly empty.  We’d considered stopping in Tewkesbury, but it was still early and a lovely sunny warm day, so had decided to carry on, but ended up waiting until after the lock keeper had had his lunch break.  In that time I walked into the town to get postcards and some milk.  There were a couple of amusing signs too. 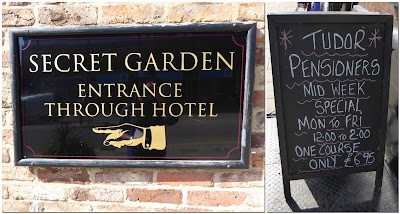 At 2pm we went into Avon Lock, which is at right angles to the river, and we were let down.  As we were about the leave the lock, the keeper signalled to wait, as there was a cruiser reversing past the lock.  It turned out to be a quarter of a million pound Fairline, which turn turned and sped off, never to be seen again. 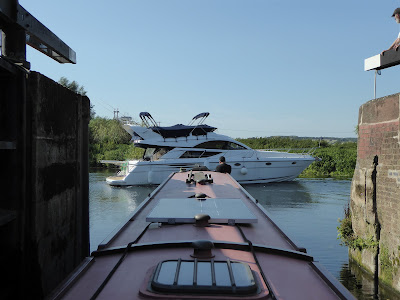 We turned right, north, onto the River Severn, headed under Mythe Bridge. 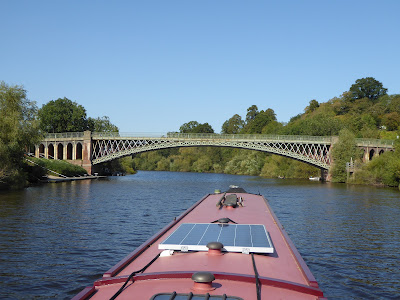 There’s not a huge amount to see.  We went under the M50, then at the northernmost aggregates Wharf all the barges were tied up.  One was fully loaded but tied up to an empty one, showing how much they go down into the water. 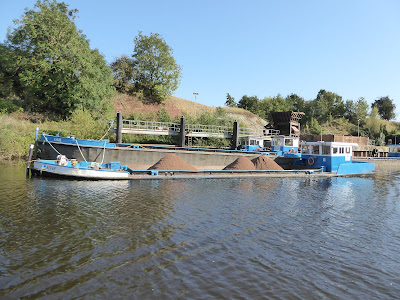 Soon the skyline of Upton-upon-Severn appeared on the skyline.  The moorings here are always busy, but just like last time we were here, the inside of the pontoon was free so we slotted in and moored up.  We went for a riverside pint at one of the pubs here.  The glass flood wall has been decorated with facts about climate change. 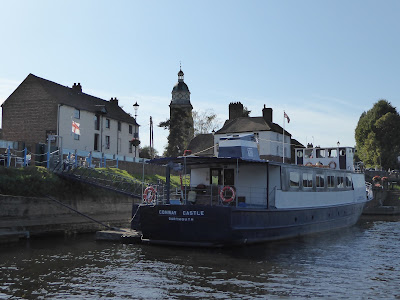 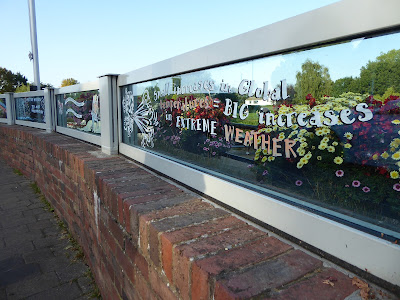 It would have been my mother’s 86th birthday today, so we’ve been thinking about her today.  Being here has also brought back happy memories of the last time we moored here, when we had one of the best chance meetings ever.

Email ThisBlogThis!Share to TwitterShare to FacebookShare to Pinterest
Labels: Upton-upon-Severn