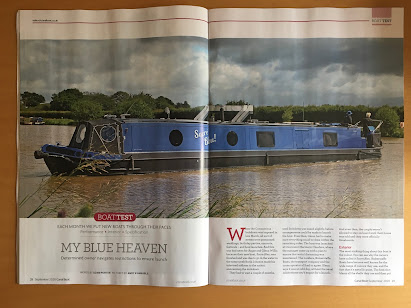 The September issue of Canal Boat is out, and includes my boat test on Sacre Bleu by Bickerstaffe Boats.
Posted by Adam at 10:29 No comments:

Back to the marina 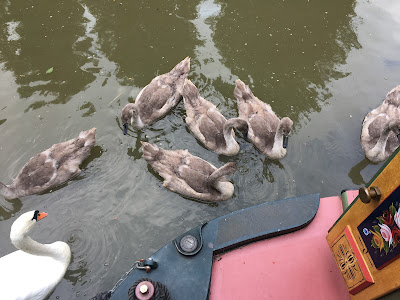 This gang came visiting this morning.  I had a few jobs to do, as my cousin and family are borrowing the boat for a couple of weeks next month as they can’t go to Canada.  Top of the list was re-setting the loo, which was the reason I moored near the Elsan.  I also put loads of stuff away.  Before long I set off back to the marina.  Here are the new houses being built by the bridge. 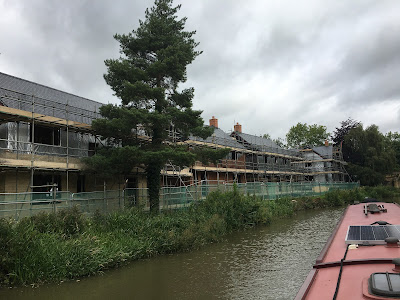 I did a perfect spin and reverse into our berth, and even our neighbour commented on it!  I was soon in the car and heading home.
1 mile.  (2 miles)
Posted by Adam at 14:42 1 comment: 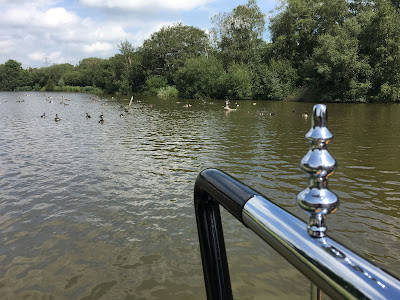 I came up to the boat after work yesterday evening, arriving at 7.45.  This morning it was a fairly early start to go to Higher Poynton for a boat test.  Google maps took me right up the M6 to Manchester Airport, and then on to Poynton; apparently new link roads have made the journey quicker.  On the way back I went cross country to the M1.  I was back at the boat at 4.30, so headed out of the marina down to Cosgrove, where I turned above the lock and moored up.

It was a beautiful morning — so it was a shame we had only five miles to cover back to the marina.  We set off at 8.15 under blue skies. 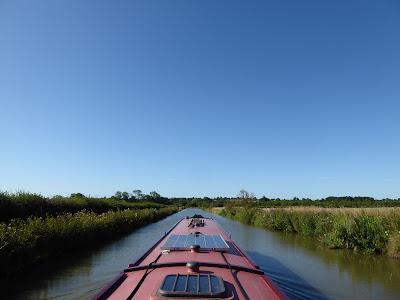 By Bridge 57 at Grafton Regis there has been a sunken cruiser for some time.  Now it is marked with an improvised floating buoy. 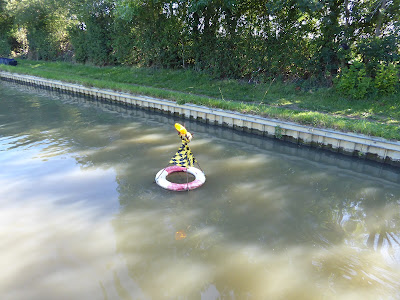 It took the usual hour and a half to get to the marina, and we were soon back in our home berth.  I took Adrian to Milton Keynes station to get a train to Crewe and then Nantwich to get his car, while I headed home as I have early shifts starting tomorrow.  Adrian is back on board for the night, to break the journey home.
5 miles, 0 locks.  (153 miles, 83 locks)
Posted by Adam at 18:20 No comments:

It appears that the mooring on the bollards at Buckby bottom lock has less noise from the M1 than further along where we normally stop.  Or maybe the wind was just in the other direction.  Anyway we had a quiet night, apart from the noise of the rain, which was quite heavy at times.  By this morning though it was dry and brightening up.  We were in no rush to leave, as we wanted a top up of diesel at Rugby Boats, and their website said they didn’t open until 10 — so I set off at 8.40.  Sure enough, we arrived just after 10, and had to wait for a few moments while another boat paid.  The diesel price was good today, at 69.9 basic per litre.  By the time we set off again, the sun was properly out. 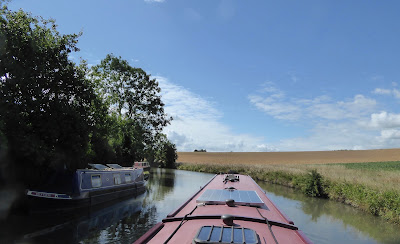 At Heyford Fields we passed a Buckingham Canal Society crane being pushed by a tug.  There had been an early morning closure of Blisworth tunnel today to let it through.  It was followed by a procession of three boats — the lead one said he’d been behind it since Blisworth.  He wasn’t impressed. 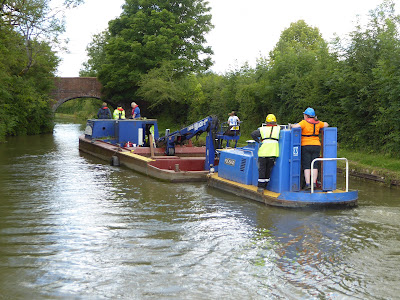 Past Bugbrooke there was what would normally have seemed like a long fishing match — but it was nothing compared with last Sunday on the Shroppie.  There were lots of boats moored before Blisworth but only one in the village itself.  The tunnel was very foggy, and we were more than two thirds of the way through before I could see the far end.  We passed two boats inside.  The Stoke Bruerne end was buzzing with people, including to kayakers and a paddle boarder.  The towpaths were busy, and among a couple of trading boats was an off licence.  There were two boats ahead of us to go down the locks, so while we waited, Adrian went to find Kathryn, and we had a quick catch up.  It was also good to see Mike and Stuart on the trip boat, Charlie, and all the Covid precautions they are taking.
We went down the top two locks on our own, and had boats coming up at each.  One of the boats going down ahead had moored in the long pound, so we teamed up with the other one for the remaining five locks. 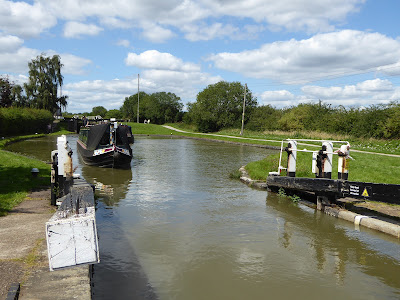 We moored at the bottom at about 3.30.  A bit later, Adrian’s former colleague Thelma and her partner Martyn dropped by, and we had Prosecco and crisps on the towpath in the sunshine.  As I opened the bottle, the cork flew out the side hatch, and certainly gave the local ducks something to think about.
15 miles, 7 locks.  (148 miles, 83 locks)
Posted by Adam at 19:33 No comments:

We left at before 8 this morning, covering the familiar miles between Hillmorton and Braunston.  Before long the landmarks of Braunston showed themselves — the knobbly church spire, and the windmill with no sails. 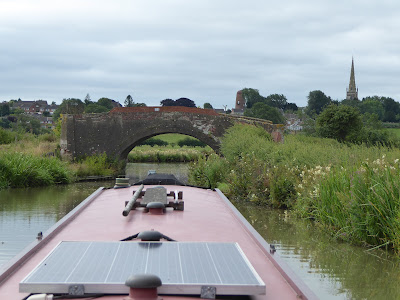 There was chaos at Bridge 90, with a boat moored off the end of the moorings, rather too close to the bridge, and boats in both directions.  Then there were two boats on the water points before the junction making it very narrow.  But once past the junction there was plenty of mooring space, had we needed it.  We stopped at the next water point and filled the tank, which might have been a tactical error, as plenty of boats went pas heading for the locks.  When we made it to the locks, there were two pairs of boats ahead, so it would be a while before we got going.  In fact, it was a good half an hour before we could enter the lock; with the number of boats around, I thought we’d definitely have gained a looking partner during the waiting time, but none materialised. 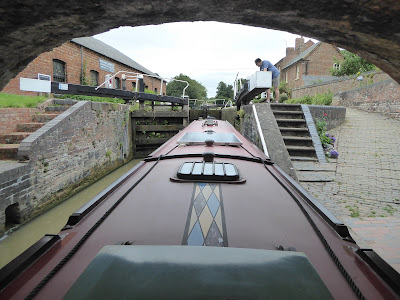 We met boats coming down at every lock, though, so it was a fairly good run up the six locks, completing them in a little over an hour.  At the top we moored up, as Catherine, Nigel, and the kids were coming to see us.  They arrived at pretty much the same time we did, so was had lunch on the moorings there.
Setting off again, we completed Braunston Tunnel without seeing another boat. 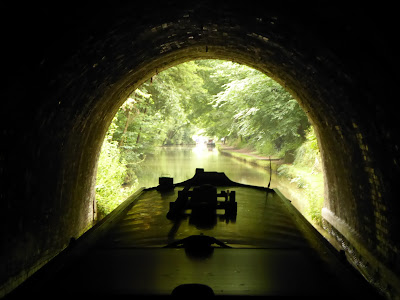 At the top of the locks there were also no boats going our way, so we set off down the flight.  The top lock needed topping up, but thanks to meeting a couple of uphill boats the rest were full — apart from the last one.  We had child labour to aid our passage too. 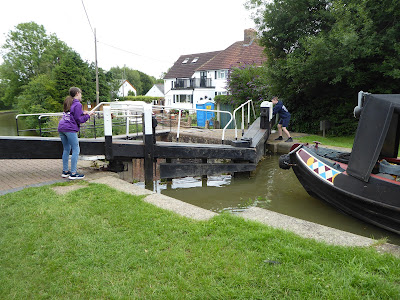 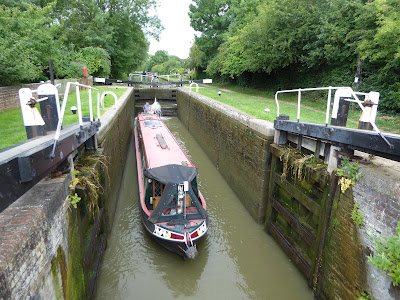 And this is Grace being a gnome. 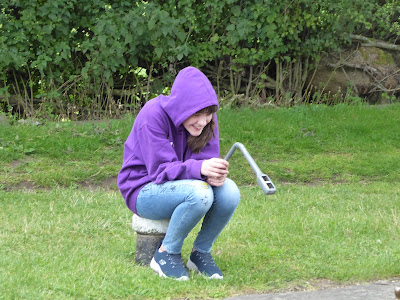 We moored at the bottom of the locks, and sat around chatting for an hour or so, before Nigel headed off to the chippy in Norton to bring back a selection of fish, battered sausage, and chicken, and loads of chips.  It’s been great catching up with the family, whom we haven’t seen since we came this way heading north in March.
13 miles, 13 locks.  (133 miles, 76 locks)
Posted by Adam at 20:27 No comments:

Finally another sunny and warm day — which was just as well because we have travelled some very familiar and rather dull waters today.  We set off just before 8, and were soon passing the back gardens and allotments of Nuneaton.  We passed Marston Junction and Charity Dock, then arrived at Hawkesbury Junction.  Adrian jumped off to work the lock while I took the boat round the 180 degree turn under the junction bridge. 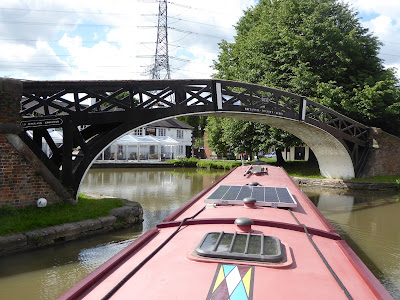 A boat was coming down the lock, but as the fall is under a foot it didn’t take long.  We then had ahead of us the long straight sections of the North Oxford Canal; we treated ourselves to a mid morning crumpet. 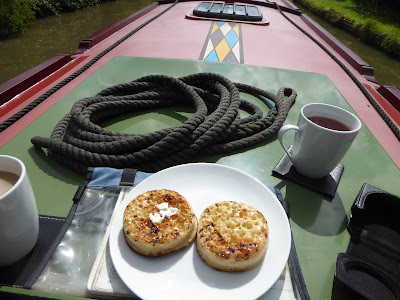 We plodded on through Ansty, Stretton Stop, and past Brinkley.  As we went into Newbold Tunnel, a boat at the other end panicked and was soon right across the canal.  It was a Willow Wren hire boat, and by the time we passed them the couple were having a discussion about really needing a map.  I pointed out that the tunnel can fit two boats inside.  At Rugby there were plenty of moored boats and plenty of traffic.
When we got to Hillmorton Locks, there was a boat in front of us waiting to go up, and one already coming down.  Then another downhill boat arrived, so it was a while before we could start ascending. 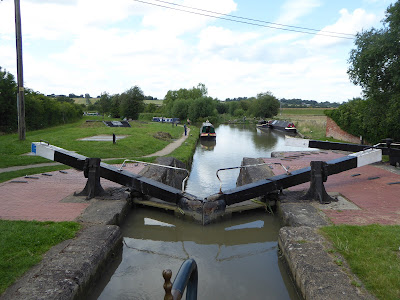 Only one lock of each pair was being used; it turned out the others were closed for social distancing reasons.  The volunteer lock keepers thought this was ridiculous, and so did we when we found three boats waiting in front of us, with very little movement at all.  Adrian made use of the waiting time by going across to the cafe to buy Magnums.  Then he went up to the second lock to help out, as did the teenage boys from the boat behind us.  More and more boats were coming up the bottom lock, so eventually one of the volunteer lock keepers came and opened the other locks to get things moving.  All in all, the three locks took longer than some much lengthier flights we’ve done.  We moored at the top of the locks at about 4.30, and immediately got out the bucket, the sponge, and the polish, and did the other side of the boat, so we no longer look like a disgrace.  Adrian had made a moussaka as we’d been coming along this afternoon, and after that I have a union meeting by Zoom.
23 miles, 4 locks.  (120 miles, 63 locks)
Posted by Adam at 18:52 1 comment: