It was incredibly quiet above Braunston Locks, but I didn’t sleep particularly well.  Consequently it was about 7.45 when I got ready to leave, and walked down to fill the top lock.  While that was happening I went down to the second lock, which just needed topping up, so I could soon open the gate.  With the top two locks set, I left the mooring bang on 8am. 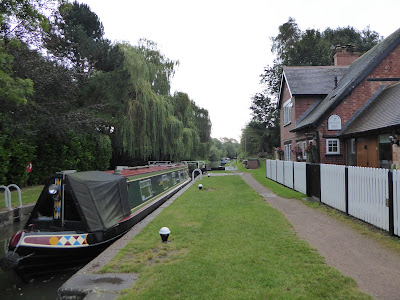 While working the top lock, I was surprised to recognise a jogger going by — the owner of one of the boats we did a boat test on last Wednesday.  When the lock was empty, I pulled the boat out and closed the gate behind it, bu which time the stern was at the bottom of the steps and I could step on.  The third lock was almost full, so when the boat was two thirds of the way down the second one, and I could be confident it wasn’t going to drift back over the cill, I walked down, topped it up, and opened the gate.  The cottage alongside has bird feeders which were busy with great and blue tits. 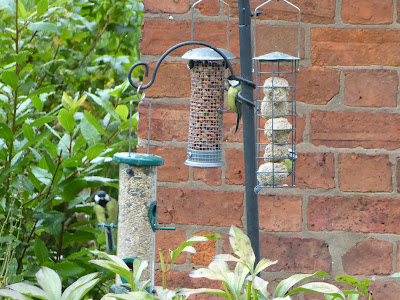 The fourth lock down was empty with a bottom gate open, as someone was just setting off from the moorings in that pound.  I left the gate of my lock open for them.  By the time I was in the fourth lock, another boat had arrived and the crew worked the lock for me.  The fifth lock, by Crooked Cottage, just needed a top up, and there was a boat coming up the bottom lock so I could again leave the gate.  There was a volunteer lock keeper at the bottom lock, who opened the gate for me.  I’d had a pretty good run down, getting to the bottom at 9.30.

As I left the bottom lock, I could see a long tug deck poking out of the marina exit, and then reversing back in again.  I wasn’t quite sure what was going on but I held back.  He wanted to turn left, but his angle of approach meant quite a lot of to-ing and fro-ing was needed.  The delay actually worked in my favour because I was looking for a mooring and no-one seemed to have left yet.  I’d been too efficient down the locks!  But a hire boat was preparing to set off, so I waited and slipped into their space.  “It’ll be tight” said the woman on board, looking at the length of Briar Rose; it was, but there was just enough space.

Having moored up, I walked back to the shop at the bottom lock for some postcards, then across the field up to the village to get some dinners for the next few nights from the butcher.  I walked back down to Butcher’s Bridge, completing a circular walk.  Most of the time I was out it was drizzling.

A bit later I had a clear out of the out of date packets and jars in the cupboard, and headed down to the rubbish bins.  It was good timing, because on the water point I found Del and Al from Derwent6, with their friends John and Louise on Ploddin’ Along, who also have a very excitable new puppy.  It was really good to see the, and have a quick catch up. 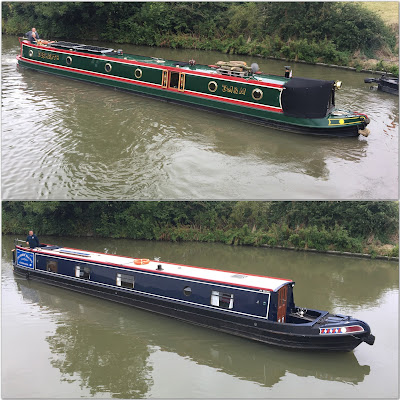 I walked across the marina heading for the post box on the main road but got waylaid again, this time by Phill Abbott from Wharf House Narrowboats, who’s now based in the marina.  We had a chat and he showed me the boat he’s currently refitting.

Back at the boat I made myself a sort of packed lunch to have en route, and set off at 12 noon.  It takes ages to get out of Braunston because of all the moored boats.  At the junction, a boat was coming from the Napton direction so I held back until they had made the turn.  I was going straight on towards Rugby. 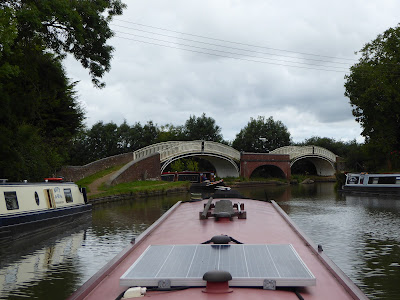 A boat was coming through Bridge 88 as I approached, and this seemed to set the pattern for the journey: I met boats at bridges, but I was always just far enough away for it not to be a problem.  Looking back from Bridge 88 you get the classic view of Braunston. 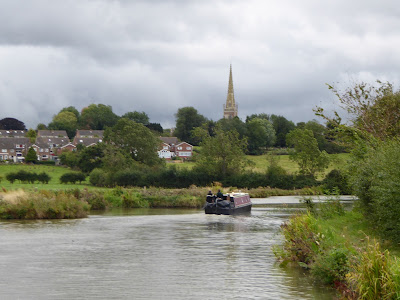 Soon after this the sun came out, although it has been very blustery.  The countryside is pretty and I enjoyed the journey.  As I passed the entrance to Dunchurch Pools Marina, the wind whipping across almost pushed me onto the bank on the offside.  I ticked off the bridges, then after the two big rail bridges at Hillmorton is the first sign of the new town being built on the old radio station where the dozens of masts used to be.

I could have moored before Bridge 72, but you need stakes there and mooring up is enough of a faff single handed — so I took a gamble that there would be space immediately above Hillmorton locks.  The first gap I tried to get into with the help of another boater was about a foot too short.  The one the other side of the same boat was shorter.  But there was a space right at the far end.  I was button to button with the boat already there, but am on rings at both ends — the bow being on the very first ring of the moorings.

This afternoon I have scrapped the towpath side of the crater cover to try to make it look less green. Lots of green has come out, but I suspect it will still look a bit uncared for when it dries.

You are a star doing all of that on your own! I thought I was good doing from Hawkesbury to Hartshill alone and I only had the stop lock to do!

Aren't the hanging baskets at the top lock cottage just beautiful? The lady there does such a lovely job with them and whenever I see her I always tell her so!

We also enjoy meat from the Braunston butchers - their fillet steak is particularly good, and we had their lamb shanks recently - very delicious.