We treated ourselves to a fry up this morning as we had the eggs from the lock cottage at Welsh Road.  We set off a bit later than usual at 9, and headed along to the bottom lock at Hatton.  A Kate hire boat was just about to go into the lock so we partnered up with them. 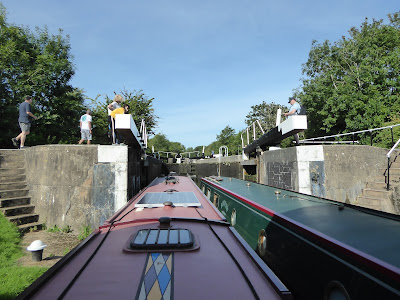 We had a good run up the locks, although there we two boats ahead of us so we usually had to wait for them to exit the lock above before we could turn it.  We got on well with the Kate Boat crew — two brothers and their wives doing the Warwickshire Ring.  About a third of the way up, reinforcements arrived in the form of Catherine, Nigel, Grace, and Matthew, so between us we had more lock workers than we knew what to do with.  Hatton never ceases to impress, especially the ‘thick’, where the locks are close together.  You can see right back to Warwick Church from there. 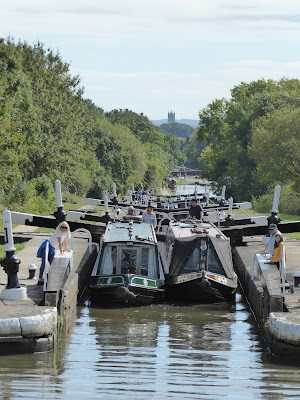 Towards the top we began to meet boats coming down. 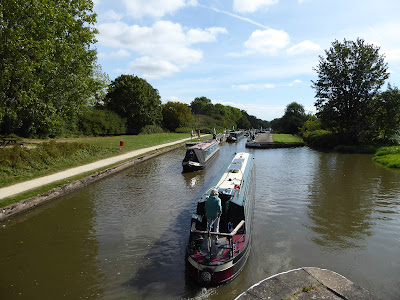 We reached the top of the locks in three and a half hours — probably about average time for the flight.  There were plenty of gongoozlers about, and the cafe at the top was very busy.  We pulled in on the visitor moorings and had lunch, mostly brought by Catherine.  When we set off again, Matthew was keen to steer; in fact he steered all the way from there to our mooring just before Kingswood Junction, and he made a very good job of it.  He’s only ten, but has a real feel for where the boat is going. 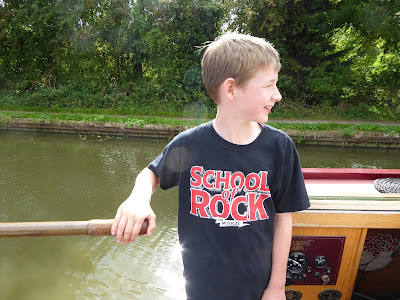 Today was Catherine and Nigel’s wedding anniversary, so we all went off to The Navigation for a meal.  The menu consisted of Sunday roasts, but they were all very good.  We had starters and mains, as Catherine had brought a big chocolate cake which we had somehow not yet made a start on, so we walked back to the boat via the locks, and had tea and cake.  They departed soon afterwards as they have work and school in the morning.  It’s been a very enjoyable day.