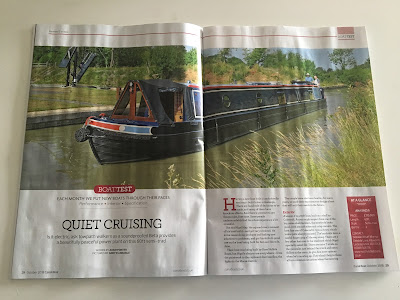 The October edition of Canal Boat is out, and includes my boat test of the Russ Hubble boat, Anasazi II. 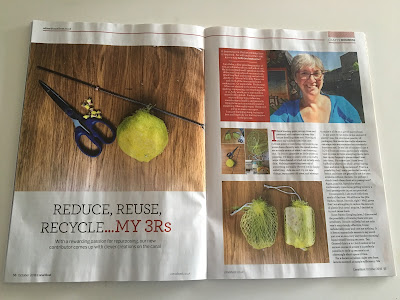 We consider ourselves pretty lucky today, because the forecast was rain pretty much all day, and yet we hardly got wet at all.  There was some drizzle, but never very heavy and never for long.

Before we left, we washed the side of the boat, as the rain last evening and overnight had washed off the Fertan, but only as far as the cabin side.  It was a job to get it off, and not a hundred per cent successful.  It was just after quarter to nine when we set off, wishing Catherine and co a very happy holiday as we passed Rowington.  It was pretty blustery, and there weren’t many boats about.  Having come face to face with Mountbatten yesterday at Gayton Juntion, today we met it at the blind bridge hole just along from there.  We again weaved our way past. Blisworth Tunnel was wet inside.  There was a moment at the start where I thought our headlight wasn’t working — I couldn’t see a thing, and the nav lights weren’t helping.  Adrian diagnosed that I’d turned on the bilge pump instead of the headlight.

When we got to the locks we saw Kathryn again.  A boat had just gone down, and were also ahead at the second one but said they’d wait for us after that.  From the third lock down there were loads of boats coming up, so there were several examples of synchronised boating. 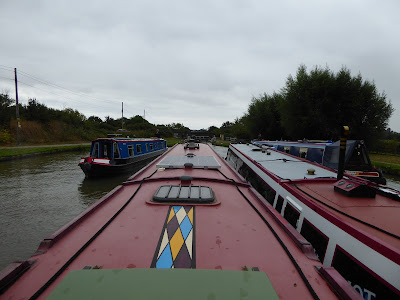 It turned out that the people we were going down live live in the village in Kent where I spent much of my childhood, and where my father still lives.  We thoroughly enjoyed sharing the journey with them.

At the bottom we had lunch on the move, and got back to the marina at around 2.30.  The people on the first boat moored on the outside of the marina appeared on their rear deck to watch me battle the breeze to turn into the marina; then as I did my spin to reverse into our berth I could see their heads peering above the hedge.  I half expected them to hold up score cards.

We quickly packed up the boat, then I dropped Adrian at Milton Keynes station for a train to London, and I continued the drive home.

We set off at just after 8am.  Conscious of the water shortages, we had been looking out for someone to share the locks with, we’d been keeping an eye out for other boats.  But all the others moored at the bottom were facing the other way, and there was no sign of anyone coming along the long straight. So we set off, only to find another boat a few locks ahead. 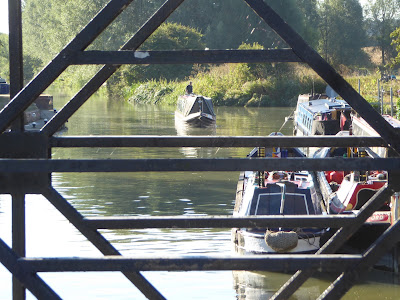 Even though we had to turn every lock, the flight up to Stoke Bruerne took the usual hour and a half. We saw Kathryn at the top lock, and Mike from The trip boat, Charlie.  Then it was through the tunnel.  There were two boats coming the other way, one very close, the other a long way off.  We eventually passed the second boat at the northern end of the modern middle section; at that speed, it must have taken them an hour and a half to go through.  We turned right at Gayton Juntion and carried on down to the winding hole above the top lock where we turned around. 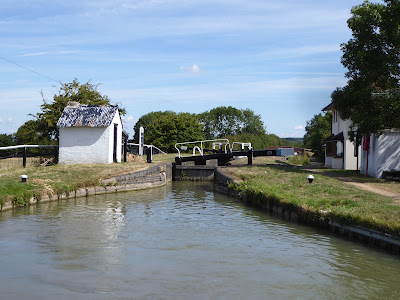 We moored up opposite the marina.  I’d spotted Alchemy in the marina, and a little while later Mike and Christine were there, calling across the canal.  Mike came by a little later for a longer chat; it was good to meet them at last.  While we were moored, we rubbed down the other hand rail and applied Fertan to treat the rust.  But the real reason for being there was that Catherine, Nigel, Grace, and Matthew were starting their holiday on Rowington, their share boat today.  Before long they arrived and started to transfer everything from car to boat.  When they were ready to set off, we left with them behind us. 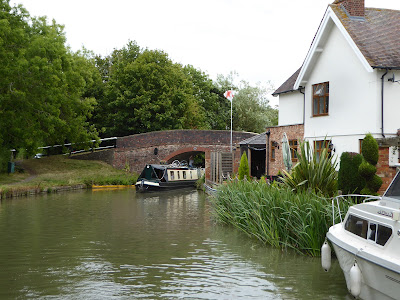 Gayton Junctiom was busy.  As I did the turn right, the disabled widebeam trip boat, Mountbatten, was coming along, and there were other boats behind.  It seemed pretty busy all the way along.  We carried on to a nice mooring we’ve never used before because it’s often full, just before Bridge 33.  I dropped Adrian off to help the others moor, while I comtinued to the winding hole at Furnace Wharf, to turn for the second time today.  With both boats moored up, we gathered on Rowington.  Nigel was in charge of the barbecue (in spite of the rain that came through), and we each provided stuff to eat. 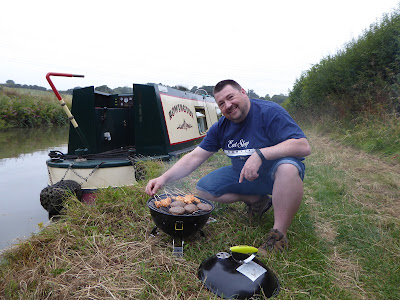 After dinner we had several games of UNO Roboto, three of which were won by Grace. 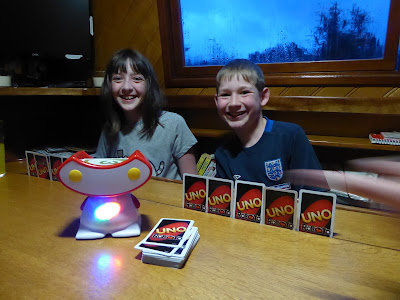 It’s been a lovely evening.  We’ve enjoyed seeing Catherine and co on their boat, and spending time with them.  Tomorrow, they head off towards Buckby and beyond, while we head back.

Email ThisBlogThis!Share to TwitterShare to FacebookShare to Pinterest
Labels: Faulkners Bridge No 33

I was up early this morning as I’ve been on nights and went to bed very early last night.  I loaded the car and set off for the boat, arriving just after 9am.  Having unloaded the car, I started the first stage of the repainting of the handrails — rubbing them down and applying rust treatment.  Almost as soon as I started the rubbing down, it began to rain.  I wasn’t too bothered; it was fairly light and I was using wet and dry anyway, so water was a plus.  I managed to get the whole of one handrail rubbed down before it started raining really heavily.  A bit later I made use of the rain to help wash all the red paint dust off the cabin side.

Having been driven inside by the rain I found other jobs to do, and had lunch.  I needed to go into Milton Keynes to pick up Adrian at the station (he’s been in Cardiff for a couple of days, and was arriving via Birmingham).  Shortly before I was due to set off, not only had the rain stopped but the sun had come out.  I took the opportunity to put some Fertan on the handrail to tackle the rust.  Adrian’s train was delayed, so by the time we got back to the marina the Fertan had begun to work.  It had dries to a shiny finish, and all the little rust spots were turning black.  I’d forgotten to take a before photo, so I took one of the other side instead.  The difference is clear. 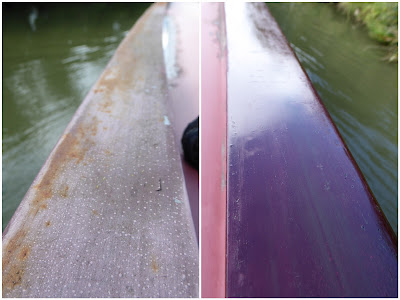 We set off straight away, turning left out of the marina towards Stoke Bruerne.  The farmers have been making the most of the recent dry weather to harvest, and the fields were full of bales of straw.  There were some big black clouds around though. 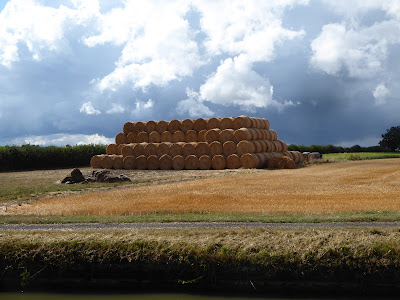 After less that half an hour I could see it raining up ahead.  As the Fertan instructions say that if it dries too much it should be dampened after a couple of hours, I wasn’t too worried.  However, for a while the rain was absolutely torrential — and I could see the Fertan being washed off.  It meant that after we moored up we had to wash it off the cabin side.  The rain didn’t last long, and even during the heaviest downpour there was always blue sky visible in at least one direction; we were just a bit unlucky to be underneath it. Soon the sun was out again, and as we approached the locks there was a very bright rainbow. 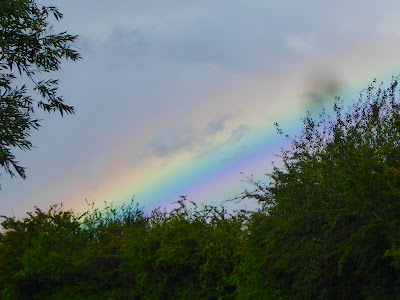 We carried on to the bottom of the locks at Stoke Bruerne.  The moorings were moderately busy, but we got a space at the end, closest to the locks.  We had chilli for dinner, which I’d made yesterday and brought with me. 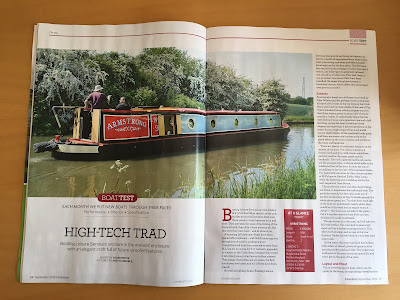 The September edition of Canal Boat is out, and includes my boat test on Armstrong, the latest from Boating Leisure Services.  For some reason, the headline calls this semi-trad boat a High Tech Trad.
Posted by Adam at 12:44 No comments: