It’s been a very tiresome day’s boating today — and not just because we were going through Fenny, Milton Keynes, New Bradwell, and Wolverton.  It has been exceptionally windy, which always makes things difficult, and it’s been cold along with it; I started off with a coat on and swapped for a thicker one (but I have still be wearing shorts).  We set off at 9, with Adrian bringing the boat while I walked along to Stoke Hammond Lock.  I need not have bothered, as the lock was full and one gate had swung open.  Below the lock, in the open hold of an old boat, was a sculpture which I’d seen on my walk yesterday; it appears to be made from a huge tree root. 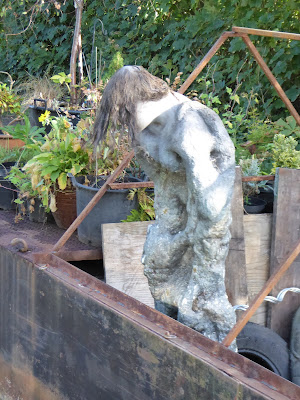 When we got to Fenny Stratford Lock a Wyvern hire boat was the other side of it.  They wanted water and we were now waiting on the water point, so they let us through first.  Adrian went to swing the bridge out of the way. 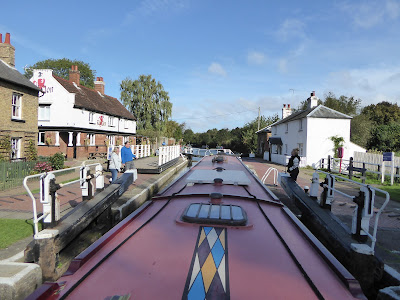 There seemed to be more boats moored up than ever, and many of them are widebeams.  It often makes passing boats coming the other way difficult.  We met several at bridges too, which is always the way.  We’ve seen at least a dozen Wyvern boats.  The new flats opposite the marina in Milton Keynes have progressed quite a bit since we were last down this way. 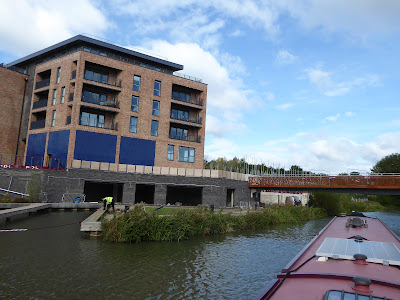 The wind only seemed to increase as the day went on.  There were waves on the wide bit of canal near the Galleon pub. 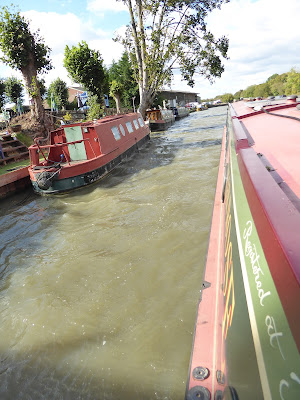 One boat on the permanent moorings by the Wolverton Aqueduct had a novel take on a beer garden. 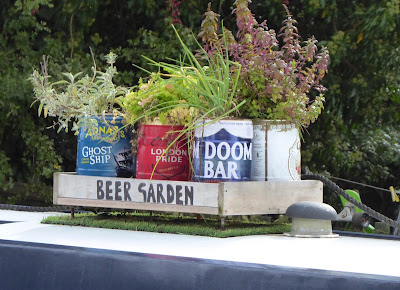 Cosgrove Lock was the last of the whole trip, and a boat had just come down so it was in our favour.  We moored up in the village, near the horse tunnel, in a section that’s away from the trees.  Catherine and Matthew are coming to see us this evening; Grace has other commitments, and Nigel is acting as taxi driver.  Adrian has been making dinner as we’ve come along.