It was a bit misty this morning, which is something we haven’t really said on this trip.  It was gone 8.30 before we set off; I walked round the corner to the first lock, Lady Capel’s, while Adrian brought the boat.  The lock is a riot of dates, with the gate collars having different dates each side, engineering bricks in the ground having three different dates, a date in the concrete on the lock wall, and a date plaque on the gates. 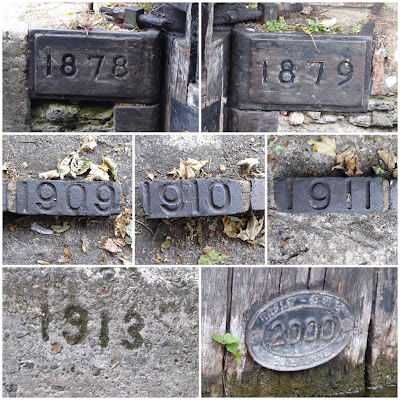 The next two locks, at Hinton Bridge, are close together, but the pound between the two was very low. 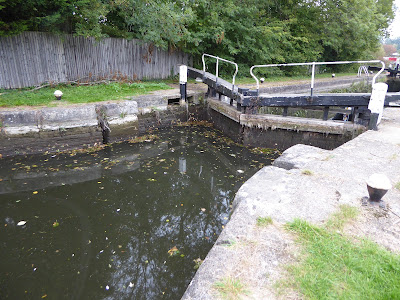 I ran some water down from above the top lock to at least compensate for what we’d be taking out of it filling the lock.  Adrian crept along the middle of the pound to the top lock, which has rather attractive cottages both sides. 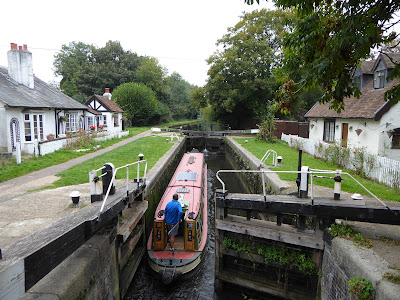 North Grove Lock, No 71, is the one which has just had new gates.  It’s one of the reasons we had initially ruled out doing the Thames Ring, because CRT were doing assisted passages through the damaged gates at set time.  But they fixed it a week ago. 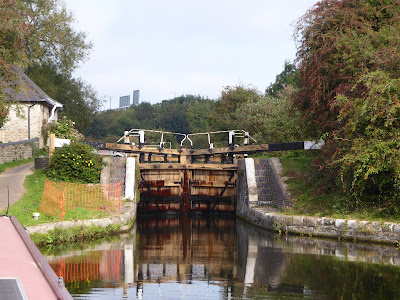 Above the lock we passed under the M25, which at this point is on a huge bridge across the valley.  There’s a lot of work going on the supports, with an incredible amount of scaffolding. 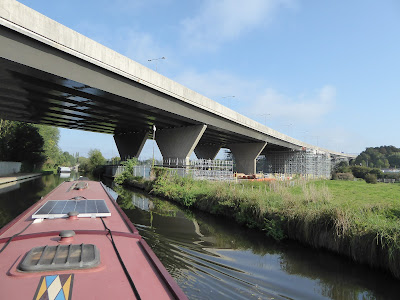 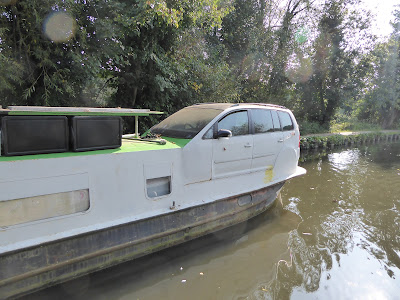 There’s lots of housing where the Ovaltine factory used to be at King’s Langley, and the flats at Nash Mills were being built the first time we came down here in 2011, and they were still at it three years later.  They’re now finished. 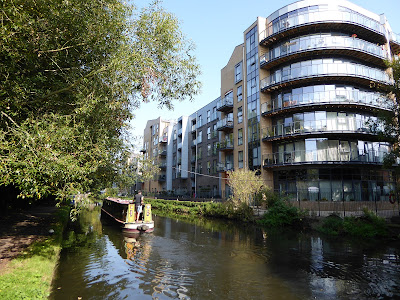 When we got to the Apsley Locks there had been some excitement.  A woman had fallen in the canal while concentrating too hard on taking photos of the swans, and had been fished out by a boater on a pair of boats ahead of us.  The woman was wet and a bit shocked, but otherwise ok.  The chap on the boat had given her a towel and a fleece, and had then continued on his way; she wanted to give them back to him, so we took them in the hope of seeing him again.  Below the bottom Apsley Lock is a rather attractive bridge that once featured in a boat test photo shoot.  I’d failed to notice that a family of three swans had come into the lock with the boat.  They seemed to enjoy the white water ride up, and were hassling me at the top to get the gates open. 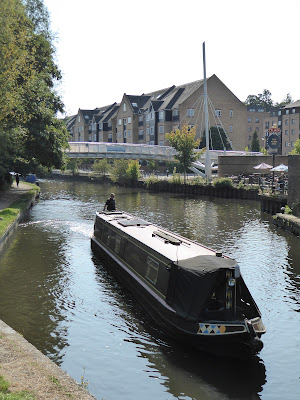 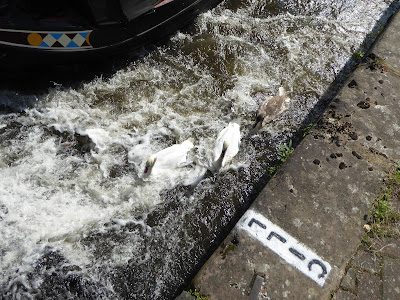 At the middle Apsley Lock, the boats ahead were just leaving, so we were able to hand back the towel and fleece.  The guy said he’d been really worried that he wouldn’t be able to pull the woman out, and she seemed to have been in the water for a few minutes before he got there.  There’s a water point above the lock, so we pulled over to fill the tank, start a wash load, and have lunch.  When all that was done we set off again, and the top Apsley Lock has a lovely white bridge immediately before it. 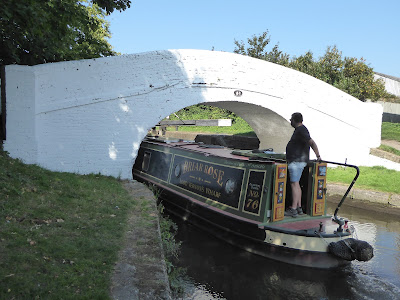 We made our way through Hemel Hempstead, although you don’t really see much of the town at all.  There are far more boats moored everywhere than there were we last did this stretch in 2014; we tried to join the line of moored boats above Boxmore Top Lock, but it was too shallow, so did one more lock at Winkwell, then Adrian swung the bridge which requires the Key of Power to operate.  He reckons he held up four cars. 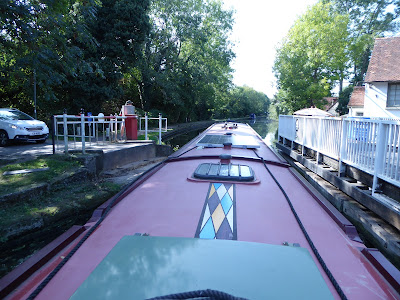 We pulled in on the 48 hour moorings between the bridge and the next lock.  There was only one other boat here — I guess because most boaters want to stay somewhere the full two weeks, not just two days.  It was only 3pm, but we thought 15 locks was enough.  We haven’t been idle though, because the towpath side of the boat, which was filthy, has had a wash and we even got some polish on it.

We’ve both been thinking about our mums.  It would have been my mother’s birthday today, and I can remember calling her from all sorts of places during our September boat trips; Adrian has been struck by how many times he’s wanted to phone his mum, to tell her something that’s happened during the journey.

Email ThisBlogThis!Share to TwitterShare to FacebookShare to Pinterest
Labels: Winkwell