We set off in more bright sunshine at about 8.45, and saw ourselves through Shepperton Lock.  Rather than take the direct but dull Desborough Cut, we went round the island where there’s much more to look at.  Walton Bridge still feels new, and is quite impressive. 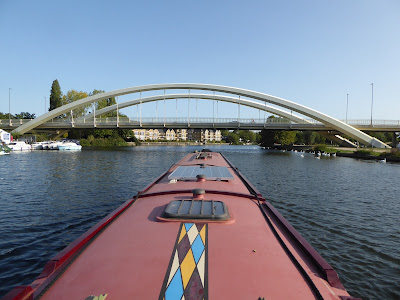 Sunbury Lock was on self service, but was full.  We waited for boats behind us, and soon there were four going down.  Hampton has a very attractive river side, with Garrick’s Temple, and Dave Gilmour’s Astoria floating recording studio.  Once again there was a man washing the windows; I wonder if they’re done every day. 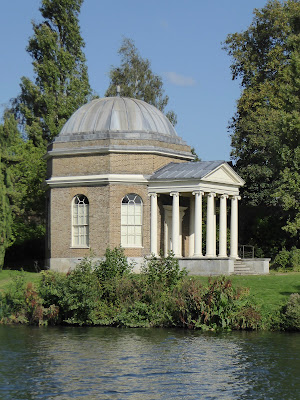 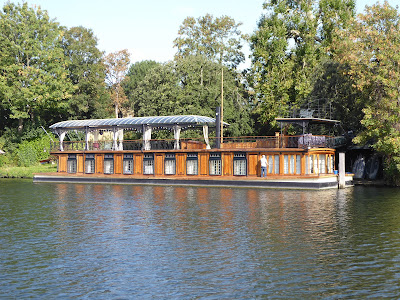 At Molesey Lock, we joined a boat which was delighted to find that we were planning to go to Brentford.  They’d been having trouble getting hold of CRT to book Thames Lock, but knew that because we had a booking there would definitely be someone there to see all of us through.  Hampton Court always looks great from the river. 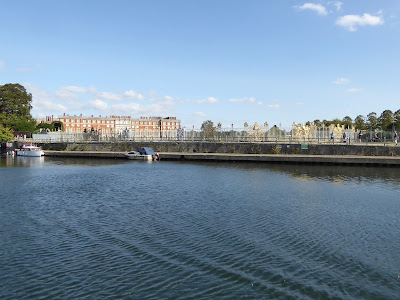 The next section was very windy, and at times the river was quite choppy.  But we made it through Kingston and moored up at Teddington at about 12.15.  We tried to talk to the lock keeper there to check our timings, but it’s impossible because of Covid measures.  Instead, we went and had a nice lunch at The Anglers (but better than last night’s dinner at Thames Court) and did a bit of top-up shopping at a nearby Sainsbury Local.  We then had a couple of hours to wait until the right tide time for the tidal section.  It was 3.45 when we headed to the lock, with Jan and John that we met earlier, and Gareth on another boat that also wanted to do the journey.  It took ages to get through, in spite of the fact that the difference in water levels was negligible.  We were put in the huge lock, which has gates half way along. 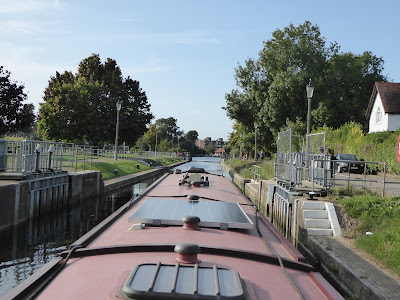 At first it felt as if we were struggling to move forward, then as the tide started to fall we sped along at almost 6mph.  Turning the corner towards Richmond there’s a great view of the Star and Garter home for disabled servicemen. 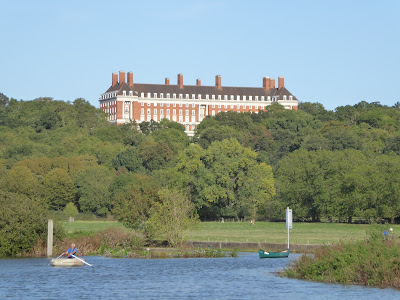 In Richmond itself, there were signs that it had been a particularly high tide, as roads were covered with water, and pubs were sweeping water from their gardens.  The path along the river was under water, with one guy picking up his bike and carrying it. 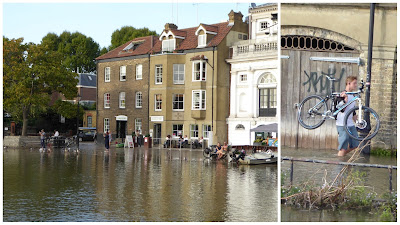 As expected, the half tide barrier was up, so we could go straight through the bridge. 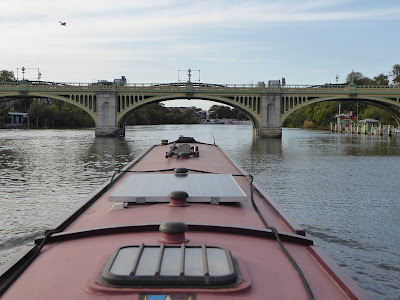 When we turned the corner towards Brentford, the wind really got up.  The river is wide here and there were proper waves on the water. 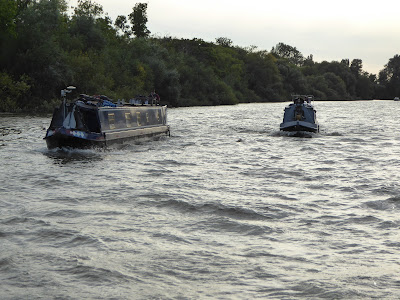 The entrance to the Grand Union is not well marked.  We were looking out for a big silver sculpture and easily spotted it, but we couldn’t remember which side of it we were supposed to aim.  We made the turn and were soon on calmer waters and into Thames Lock.  The rise to the semi-tidal waters above was minimal. 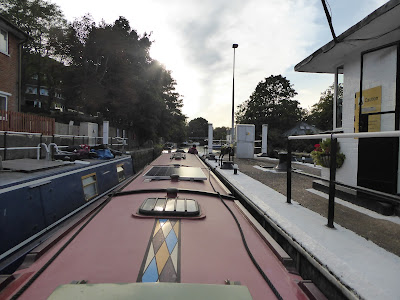 The next section is always longer than I expect, with a few bridges.  Then at the Brentford Gauging Lock Adrian got off to press the buttons.  Once up the lock we were in Brentford Basin. 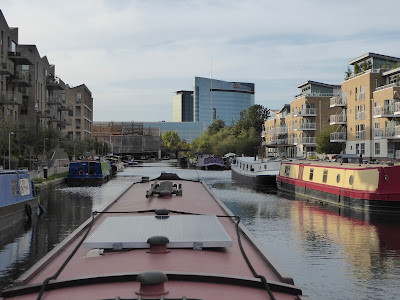 There were no moorings in the basin, so we carried on round the corner and have stopped opposite the GSK building.  It won’t be the quietest mooring of the trip, but it’s only for one night.  Jan and John have stopped right behind us.

Email ThisBlogThis!Share to TwitterShare to FacebookShare to Pinterest
Labels: Brentford

Are you heading in to London? If so, you may see Tim and Dana on Waka Huia there somewhere. Say hi to them, if you do see them!

Quite nostalgic reading your blog over the last few days - a few days ago I re-read mine for our time on the Thames. We had intended to do it again each of the last couple of years but haven't made it - maybe, if we can come to the UK next year, it'll be on our schedule!

Big hugs to you both, M&Dxx

Star and Garter is now a former home for servicemen - sold in 2011 see https://en.wikipedia.org/wiki/Royal_Star_and_Garter_Home,_Richmond