I was originally going to be doing boat tests today, but the weather further north meant we changed them to tomorrow.  So with a spare day, I decided to give the cratch cover a clean, to try to get rid of the green tinge round the edges.  After shopping for the necessary agents, I took the cover off, put it over one of the picnic tables at the top of the bank behind the marina, and began scrubbing.  I was using a car soft-top cleaner, which goes on white but soon turns green as the slime comes off. 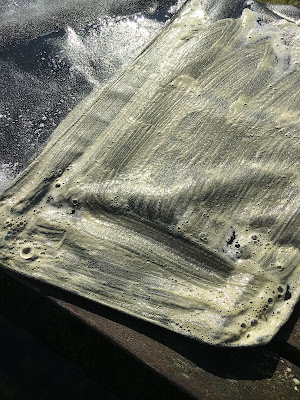 To rinse the cover, I laid it on the bank and rolled out the hosepipe. 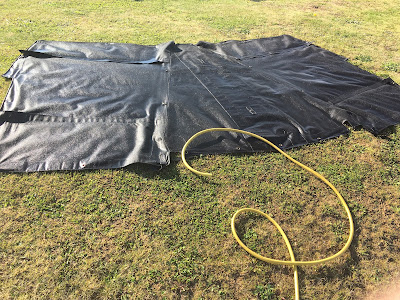 While the cleaning needs the cover to be wet, re-proofing needs it to be dry, so I put the cover back over the picnic table and left it for a couple of hours while I had lunch, and did various other jobs such as washing all the microfibre cloths and dusters we have on board.  I also took everything off the well deck and gave that a wash.
For re-proofing I used Fabsil Gold, which is the more concentrated one.  Last time I did it I used a spray can, and felt most of the product missed it’s mark — so this time I bought the liquid one which needs to be painted on and then rubbed with a cloth.  The instructions say to paint the whole item and then do the rubbing, but I thought that was impractical so I did it panel but panel.  It also means you can really see where you’ve been. 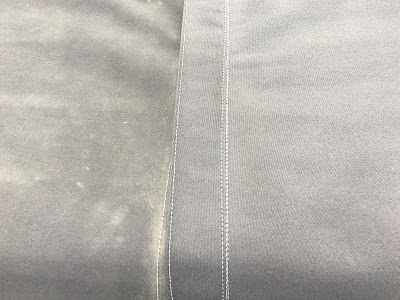 Of course nothing looks quite as good after it’s dried, but as least I know that the whole cover has had a good coating of re-proofer and I’ll be interested to see how rain sits on it.  Putting the cover back is always a bit of a chore; you don’t realise how big it is until you have to handle it.
It’s been a nice sunny day here, and quite warm in the sunshine.  The view over the marina to the spire of Hanslope church always eases the effort involved in these jobs too.  It’ll be a fairly early start and a long day tomorrow.
Posted by Adam at 17:28