We set off about 8.15, with Adrian bringing the boat while I walked up to the first lock.  It was empty with both bottom gates open.  Between that lock and the next one, we went under the Piccadilly Line. 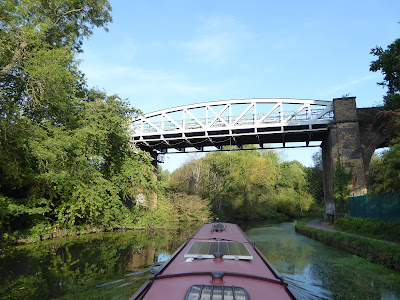 When we got to the bottom of the Hanwell Locks, a boat was preparing to go up so we joined them.  There were three people on board, so I was able to go and set the locks ahead.  The thick of the flight is overlooked by the old Victorian mental asylum. 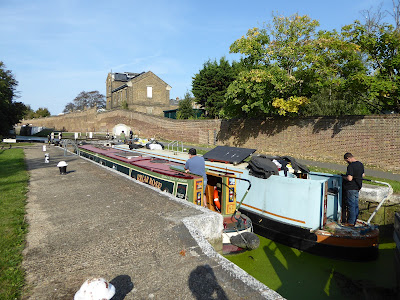 Before the final two locks in the flight, the canal goes over a railway, and both are crossed by a road.  It’s called Three Bridges — but is the railway line on a bridge? 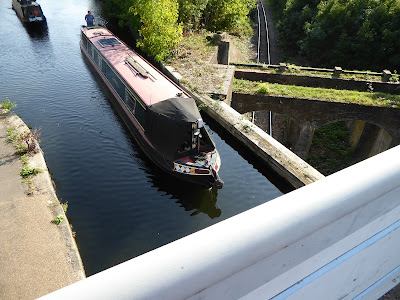 A big plastic boat was going up the next lock, and the pound above was a bit short of water.  Fortunately a boat was coming down the top lock and ran down some extra water.  All this took a little while, so our rapid progress up the main part of the flight was slowed a little.  Our live-aboard lock partners wanted to stop at the water point, but as they were done for the day they said we could go first — so we filled the tank and began washing towels.  Once we were done we set off on the 6 mile pound to the next lock.  There was a lot of duckweed on the water, which turned the canal green. 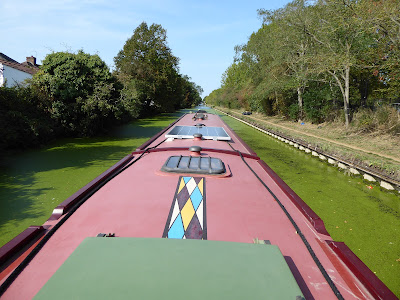 Before long we were passing Bull’s Bridge Junction, where the Paddington Arm goes off to Central London. 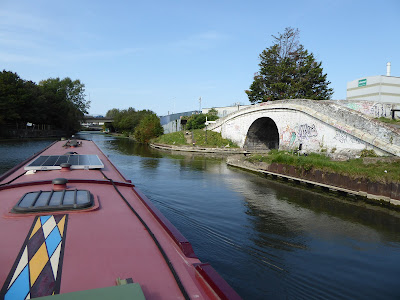 I had heard that the Nescafé coffee factory a bit further along had closed, but I hadn’t realised it had been reduced to a pile of rubble, with just a framework left standing and new flats going up behind. 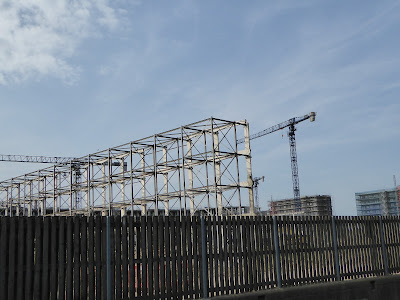 We passed Cowley Peachey Junction where the Slough Arm goes off, and then arrived at Cowley Lock just as a boat was leaving so we could go straight in.  Some kids with their dads were keen to help with the gates.  The lock cottage alongside is very attractive. 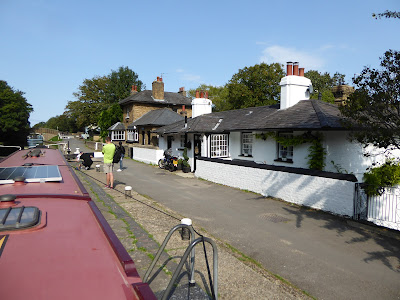 Uxbridge Lock was next, then it was under the A40 and on to Denham Deep Lock, which really is deep. It took a while to empty as only one paddle was working.  Once up the lock we moored in the country park.  We’ve also had a visit from our friend, Paul, so we’ve had a couple of hours catching up on the past few months.  You can tell we’re off the river and back on the canal: it’s the first time we’ve used a windlass since Day 8 of the trip, the first time since Day 3 that locks have exceeded miles, and the highest daily lock total since Day 2.

Email ThisBlogThis!Share to TwitterShare to FacebookShare to Pinterest
Labels: Denham

It was the Hanwell flight that introduced me to canals back in the 1960s. As a child we lived not far away in Ealing and my favourite walk as a 6 or 7 year old with my dad was along the "six locks" as we used to call them. We regularly used to see working boats making their way to or from Brentford. Some of them were towed by little diesel tractors. Once one of the boatmen offered me and my dad a trip down to Brentford! But my dad said something about having to be home for our tea! I don't think I ever forgave him! But here I am 60 or so years later living on our own boat. (And I've made the trip down to Brentford 3 or 4 times.)
Mick

As far as I can discover, the 'three' came from the three modes of transport - the bridge was Brunel's last major project. However, as your photo includes, there is what seems to be a third bridge below the level of the canal and over the railway. From engravings shown in http://www.disused-stations.org.uk/features/windmill_lane_bridge/index.shtml it was not there as part of Brunel's original plan - he placed buttresses either side of the railway to help support the large retaining walls. Fifty years later (and the OS maps seem to confirm this but you do have to look very closely!) the two arch structure is in place. I am guessing, but it looks as if someone felt that the buttresses were insufficient - certainly a canal collapse at that point would not have been good news.