There was quite a lot of rain in the night, but today has been much better than forecast. As we realised we had very little in store for lunch, we put the bread machine on first thing. We set off at about quarter to nine; Adrian brought the boat while I walked to Stoke Hammond Lock. 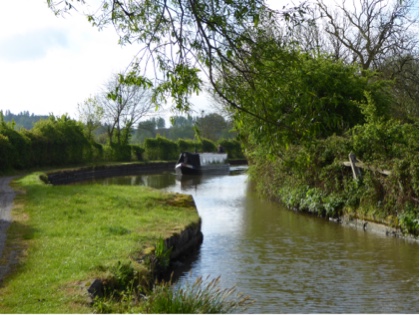 A Wyvern hire boat was just about to come up, with a family on board. The mother said they'd had some boating holidays a long time ago, but it was a first time for their daughters, and the dog was being a nightmare! It certainly seemed quite keen to get off the boat. Below Stoke Hammon lock there seems to be quite a colony of Mandarin Ducks. The other day I saw four males there, today a male and female. 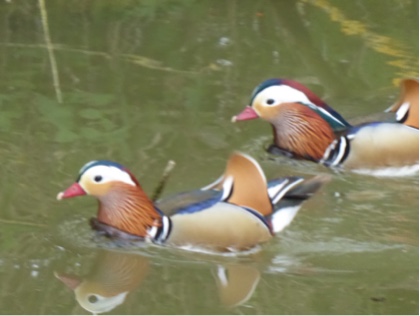 When we got to Fenny Lock, two boats had just come out but they'd already closed the swing bridge. But first one then anither boat arrived below, and they did the bridge. With so many crew from other boats, we got through hardly lifting a finger. We moored up right behind Valerie and Jaq came on board for a cup of tea. She arrived with her timer, as a cake had just gone in the oven. We chatted for a good hour and a half, remembering her Les, talking about America, and of course congratulating ourselves on having composting loos. At times it was pretty emotional, which is understandable. Jaq will be on the move again soon, so if you see her, give her a hug.

It was about midday when we set off again. Just outside Fenny was a whole procession of boats including an enormous widebeam. I was glad we met it where we did, and not in lots of other places. Around Simpson we started seeing runners taking part in the Milton Keynes Marathon. We saw then on and off right the way through to Great Linford. We had lunch on the move, ticking off the bridges along the long pound through MK. At Stantonbury we caught up with the Jules' Fuels pair, which meant our progress was slowed a bit. We moored up again at Wolverton, as Adrian needed to get a train back to London. Once I'd seen him off, I returned to the boat and set off again. As I crossed the Iron Trunk Aqueduct, I worried that this duck was feeling a bit suicidal. 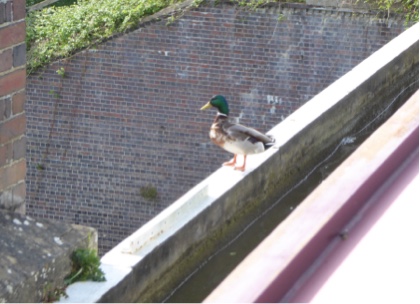 Cosgrove Lock needed turning, then as I was nearly up a boat arrived at the top. A waiting boat really gets in the way at this lock, so I suggested they come into the lock beside me, and then I would leave -- so for a brief moment there were two boats in the lock, facing opposite directions. 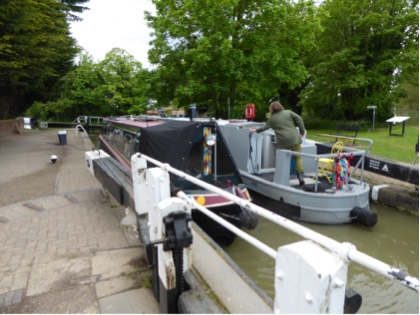 There was masses of space at Cosgove, so in an effort to extend the weekend a little I've moored up, and will do the last mile back to the marina tomorrow, before work.

By the way, well done to whoever has cleaned up the bin compound at Cosgrove. On Friday, there was an overflowing bin outside the compound, while inside looked like a disaster area, with all sorts of things dumped all over the place -- including many which shouldn't have been there at all, like cans of oil, batteries, and gas bottles. It was tricky to actually walk to the bins. While I was there, a man came and took a photo. Today, everything has been cleared, the compound is easily accessible, and all the bins are now inside the fence.

Thanks Adam for stopping in. It was lovely to see you and Adrian. thanks to for the kind mention on your blog. Next time I promise there will be cake!