Adrian came up to the boat yesterday afternoon, with the drive taking much longer than usual.  I came up by train after a night shift; I was also delayed by a passenger ill on the train, resulting in a long wait at Harrow and Wealdstone.  Adrian went to Tesco in Wolverton this morning, and then picked me up from Milton Keynes Central.

We set off a little after 10am.  The old farm house by Bridge 63 has the most elaborate marquee I’ve ever seen, being built in the garden.  Because of the sloping ground, there’s a raised floor, and there’s even a balcony looking over the canal. 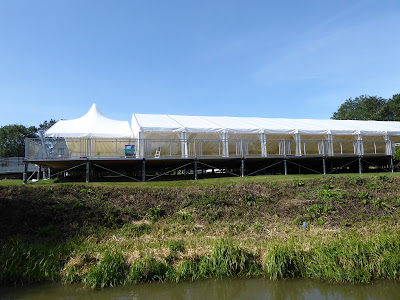 A bit further on, one field has a very substantial margin filled with sunflowers. 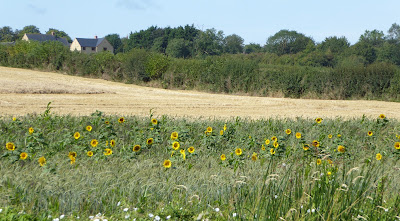 The journey to the bottom of Stoke Bruerne Locks seemed to take a little longer than the usual hour and a half.  When we got there, we found two boats about to go up, so we knew we were in for a bit of a wait.  There was also a widebeam ahead of them, and boats coming down.  The wait meant we were joined by a very nice extended family on a former Shakespeare boat, which now operates out of Gayton.  The first few boats coming down were singles, but the next ones were in pairs; we opted to try to stay parallel , and the other boats went round us. The seven locks normally take an hour and a half, but today the bottom five had already taken two hours, so we opted to stop in the long pound and have some lunch.  Setting off again, the camping boat, William, had just come down so the remaining two locks were on our favour.

At the top lock, Adrian had a set to with the volunteer lock keeper.  We know these locks well, and know that the calmest way of bringing up a single boat is to open the ground paddle on the boat side, and the gate paddle on the other side.  The volunteer had already annoyed us by lifting a paddle without checking if we were ready, and in fact not even checking if we wanted help.  He went somewhat apoplectic when Adrian lifted the gate paddle, ordering him to shut it.  Adrian explained he knew what he was doing, but the volunteer wouldn’t have it, and eventually swore at him.  Adrian asked him to just step away from the lock and leave us to it, but the volunteer instead decided to tell passers by what we were doing wrong, and then to keep up continual comments.  An email has been sent to CRT.

We went through the tunnel, and across Gayton Junction.  A little boat, seemingly specially built for offside blackberrying caused some amusement. 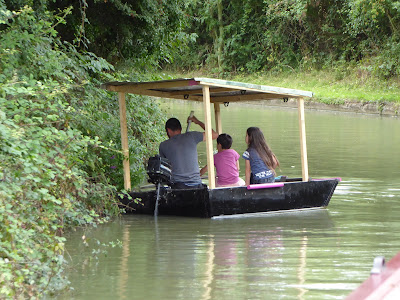 We stopped for the night at a spot we’ve often used, the other side of Bridge 46.  Of course there are Virgin trains, but it’s otherwise peaceful.  I will sleep well tonight, having already been up almost 24 hours.

That's exactly how we work GU locks when going up hill. It works well on most other wide locks too (not Chester, nothing works at Chester!). There's no way a volunteer should swear at you. It's your lock while your boat's in it. Mick

I totally agree with Mick! That’s appalling behaviour from a volunteer, and the fact that he swore is inexcusable. Good on you Adrian for sticking to your guns.
Did you tell Katherine?
Kath (nb Herbie)