Adrian came up to the boat yesterday afternoon and did things like get shopping and top up the water tank.  I came up after work, arriving just after 11.30pm.  This morning we began with a car shuffle, both of us driving up to Heyford Fields, where we left Adrian’s car.  Once back at our own marina, we set off; it was just after 8.30 and it was a beautiful morning. 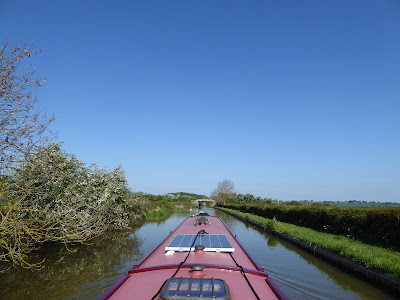 There was a decent sized flock of swans munching their way through a farmer’s field.  A bit further on were some goslings of varying age in a big group; and a pheasant, undoubtedly the world’s stupidest bird, was looking bemused on the towpath. 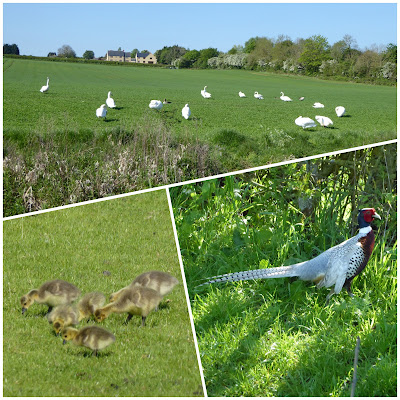 A boat moored below Stoke Bruerne Locks had a very impressive bow fender, a mermaid figurehead made from rope. 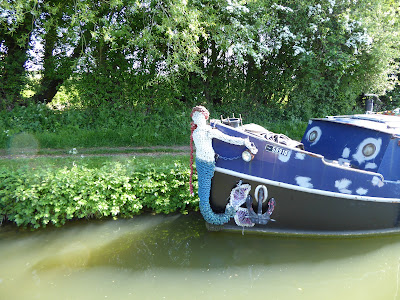 At the locks, the bottom lock was set for a boat coming down but they were still some way off, so we waited for about 15 minutes.  We were joined for the journey up the first five locks by a boat which had been on the water point, with a very pleasant couple on board.  They moored in the long pound while we carried on to the top.  In Stoke Bruerne we saw Mike on the trip boat, Charlie, and Kathryn who was giving a guided walk.  The tunnel was wet as usual, and we had lunch on the move once we were through.

It was at about this time that Adrian realised he didn’t know where his car key was.  We both looked for it to no avail, so the theory that he’d left it in the door pocket of my car, back at our marina, was looking increasingly likely.  I suggested he got a taxi from where we were, just through Blisworth, rather than waiting until we got to Heyford Fields.  So while I continued on the boat, he was picked up at the Walnut Tree and was soon back at the marina, where his key was indeed in my car.  He then drove up to Heyford Fields and swapped cars.  We met up briefly at Bugbrooke so he could collect a few things and leave my car key behind, and then he headed off to London.  While the taxi was expensive, the episode saved us quite a lot of time.

I continued a bit further and have moored up in a nice sunny spot opposite Heyford Fields Marina.  Being here means I don’t need to be quizzed by the marina wardens who swoop as soon as anyone sets foot on their frontage.  I’ll take the boat in in the morning, and watch it being taken out of the water.

I wholeheartedly agree with you that pheasants are the stupidest birds! When we lived in Oxon at Church Enstone, they used to be in the middle of the road, and on my approach, would run down the centre of the road rather than veering left or right. There is a reason that the word pea is in their name as a descriptor of brain size ...

Hope we get to see you two this season. We are at Foxton at the moment, heading briefly for Braunston then on down to Brentford and the Thames. Can we arrange a get together do you think?